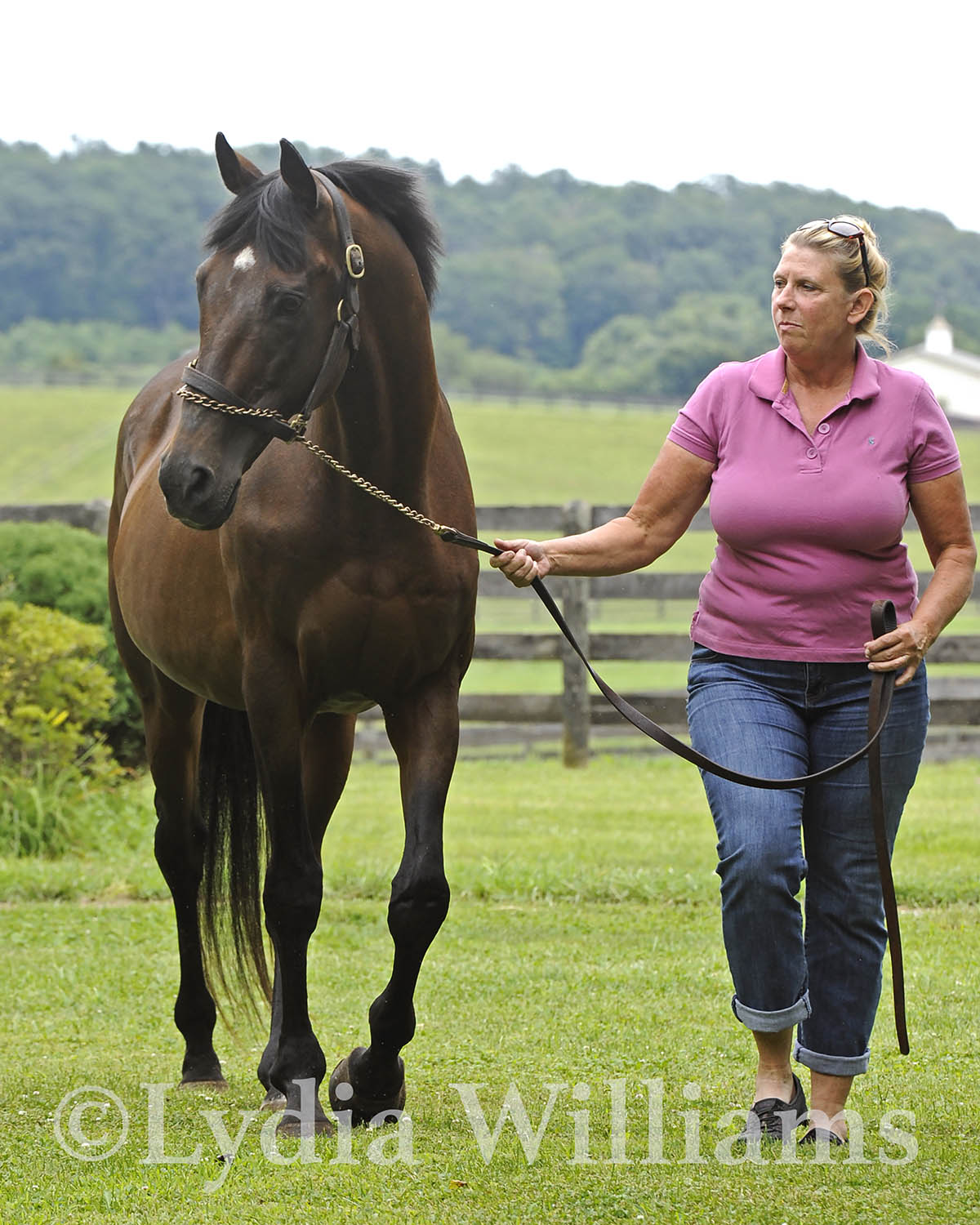 To Mid-Atlantic racegoers, he was a familiar sight. From early 1998 until October 2005, La Reine’s Terms went to the post 40 times in the recognizable black and gold silks of his owners/breeders, Howard and Sondra Bender. He ended up in the winner’s circle on 16 of those occasions, and by the time he headed into his well-earned retirement, he won 10 stakes, was graded stakes-placed and had bankrolled $804,591.

But as his trainer Larry Murray tells it, he almost didn’t make it to the races at all. In fact, he was nearly euthanized as a yearling. Foaled at the Benders’ Glade Valley Farm in Frederick, Md., in 1995, the son of Private Terms was produced from Sondra Bender and Anderson Fowler’s graded stakes winner La Reine Elaine (King’s Bishop—Silver Betsy, by Nearctic). 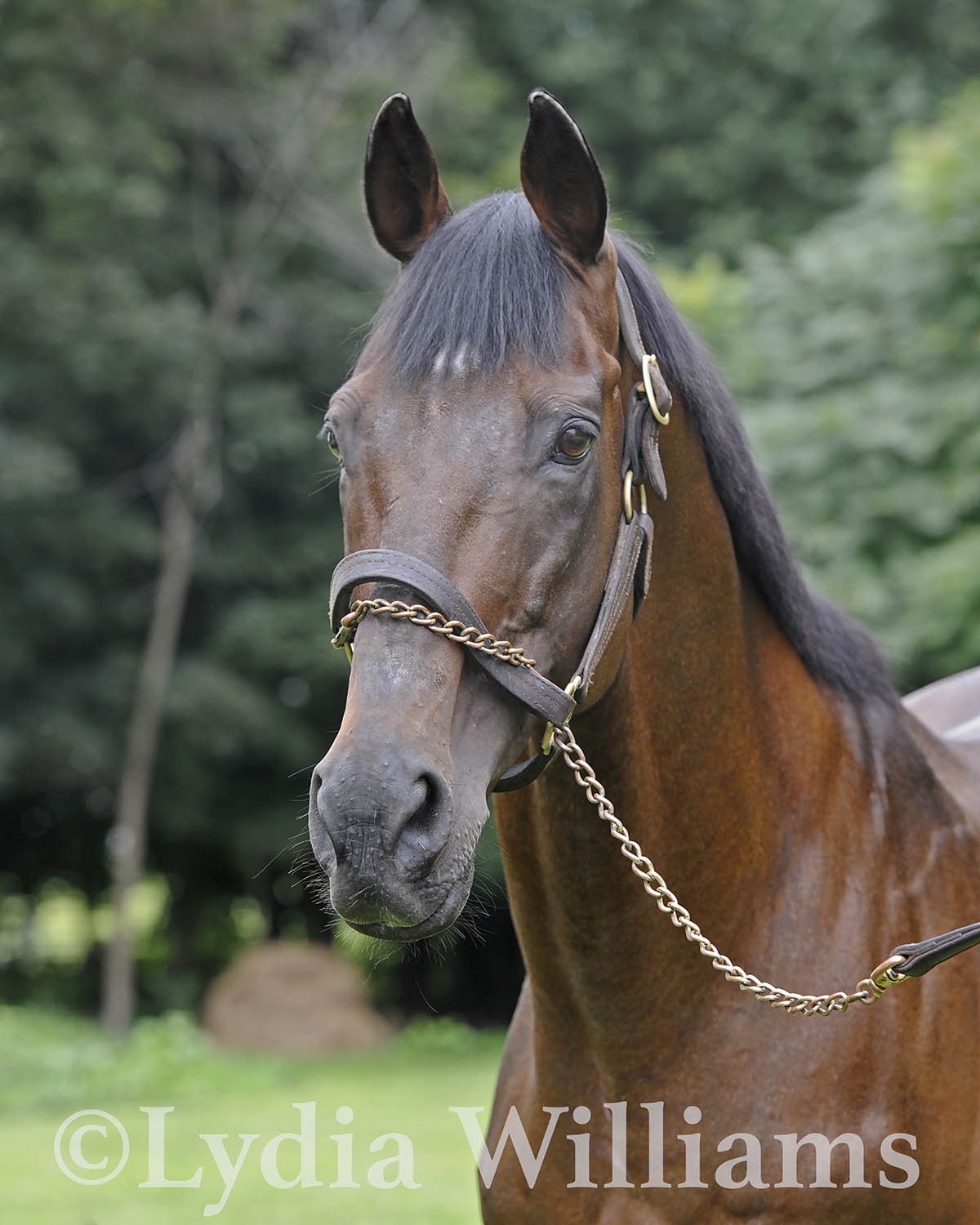 In spring 1996, Murray received a call at his Laurel Park barn from one of the Glade Valley crew informing him that La Reine’s Terms had been found lying flat out in his field. Glade Valley shed-raised its foals, and the colt was turned out in a group with eight or nine other youngsters. The men were able to get him on his feet; wobbly and drooling, he quickly went down again.

“By the time I got back to the farm the vets were with him and they were sure he had a broken neck,” Murray said. “To confirm that he needed to be X-rayed, and Dr. Garst’s [the Glade Valley vet] machine wouldn’t do it. So we sent him over to Dr. Spurlock, and I figured it was a one-way trip. He called and said there were two broken vertebrae and he felt sure insurance would have paid on the policy had we wanted to go that way. I said ‘When we put him on the van, he just didn’t look like a horse that wanted to die.’ There was a lot of fight in him. He wasn’t in any pain, so they sent him home and we thought we’d give him 48 hours and had it gotten worse, we could have put him down at the farm.”

Returning home, the colt promptly fell down again after unloading from the van. It was a bit dicey to be in the stall with him as he was still so unsteady on his back end.

“But every day he just got a smidgen better, and he always looked at you like ‘I’m not dead,’ ” Murray said. “He was a big, rough, tough guy and I’m sure he just got to rough-housing with his buddies. We’ll never know how it happened. But it was interesting for a while there. We gave him the shot because of his attitude. He was a typical alpha male; that’s why he survived.” 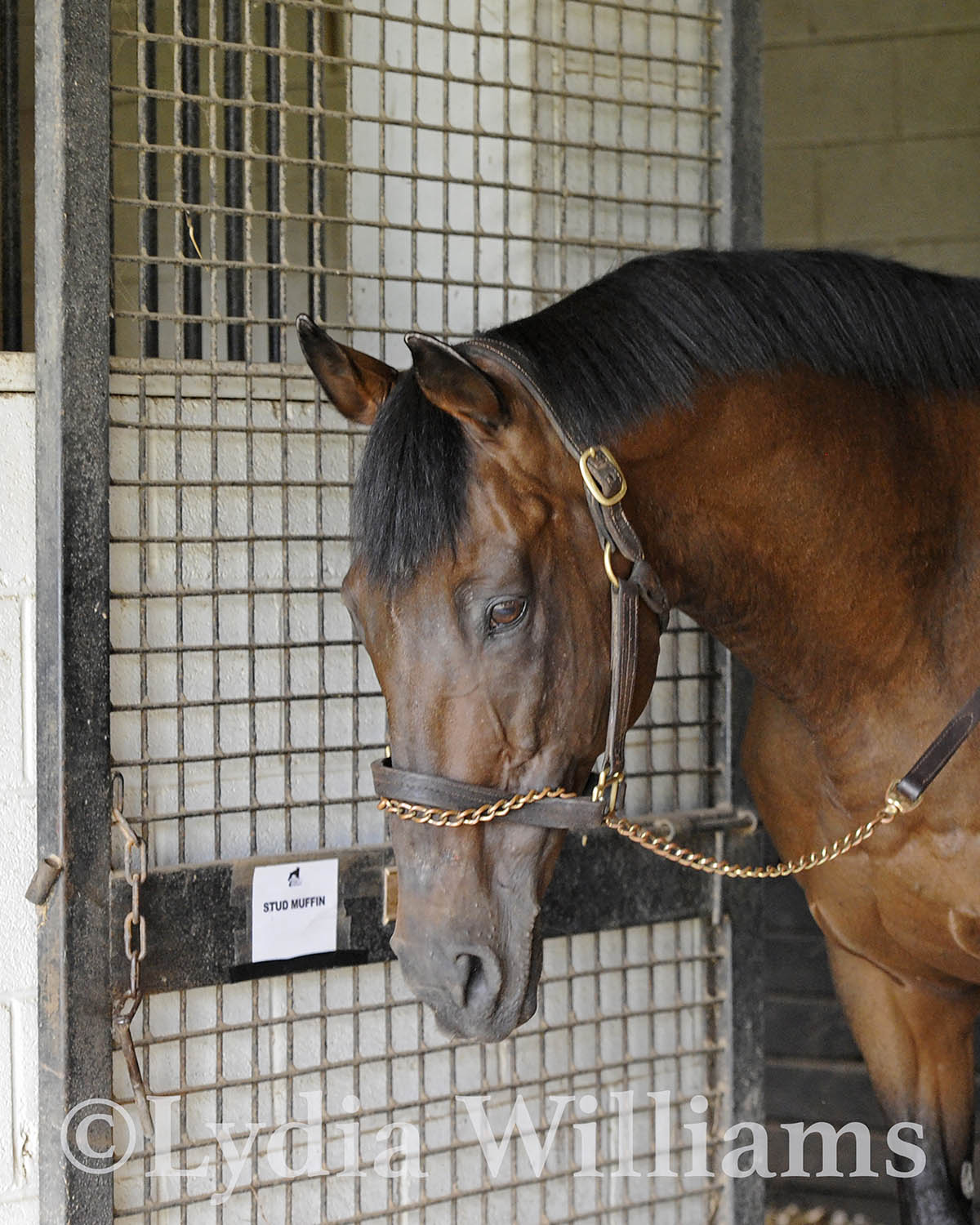 Broken late as a 2-year-old, La Reine’s Terms shipped to Murray’s barn and then made his debut at 3 on Feb. 28, 1998. For the next seven years, he was universally referred to as “The Man.”

“He was one of the neatest horses I’ve ever been around. I tell everybody that he won most of his races on just his attitude,” said Murray. “He’d walk into the paddock and he’d intimidate half the field. He’d come in prancing and snorting and you’d look over and some poor other horse is sweating, nervous as hell. ‘Holy moly, I gotta run against him?’ ”

Raced exclusively on turf after his fifth career start, the dark bay was imposing enough to earn himself a good deal of black type, including Laurel Park’s Humphrey S. Finney and Japan Racing Association Stakes and consecutive renewals of the Find Handicap in 2001 and 2002. He won seven stakes in a nine-race span (one of his losses resulted when he was wiped out on the first turn by an opponent). But his memorable performances on Maryland Million Day cemented his local hero status.

As a 7-year-old in 2002, La Reine’s Terms battled Elberton to the wire in the Maryland Million Turf Stakes, run that year on the lawn at Pimlico. He closed out that season with a win at Sam Houston in the NTRA Great State Challenge Turf Invitational.

“We always gave him the winter off of course, and every year when we would start back with him he went through a period where he felt good to start with and then he’d get a little achy and crampy. He wouldn’t feel good, but he’d work himself out of it. Val Kounelis got on him the most and she got along with him great. And he was no easy horse. He was tough; he’d take a real big hold of you.”

Murray sent him postward just four times that year. Winning an allowance first time out in June, he wrapped up his season with a third in the Maryland Million Turf behind Dr Detroit and Private Scandal.

“I remember the last year we had him. He was 10, and he just wasn’t coming around. It got to be the end of May, first of June. . . he should have been running by then. I said ‘I think he’s done, which is fine.’ He didn’t owe us anything. But we kept him there at the track because Glade Valley in the summer is hot and buggy. And at the racetrack we pampered him. So when he was standing at the door looking like he wanted to go train, we’d throw the tack on him. I used to go with him on the pony, and he just loved going out there. Probably in early August he really started to act like he wanted to do it. I told Val ‘Let him run down the lane and see what he says.’ She let him, and a couple of days later he was looking for more. He just kind of trained himself.”

His only start in 2005 was the final race of his career – the Maryland Million Turf and a rematch with Dr Detroit and Private Scandal. The Glade Valley contingent was sizable; the Benders brought a crowd, and Murray was responsible for “about 30 friends and family” of his own. In his first race in a year, La Reine’s Terms gave everybody one last thrill – fighting to the front in the stretch and denying Dr Detroit by three-quarters of a length.

“It was a fantastic day,” Murray said. “People really loved this horse.”

The Benders, of course, loved him enough to give him a shot as a stallion at Glade Valley. . . even though they and Murray realized he would not be terribly commercial. There were strikes against him – he was strictly grass and not from a fashionable or predominate sire line. They supported him a bit themselves, but he never managed to get any serious runners.

“I think the people who did breed to him did it out of sentiment,” Murray said. “He was around the racetrack for so long that he had a tremendous amount of fans. He was a fan favorite.”

Regardless, there was never any question that La Reine’s Terms would live out his days at Glade Valley. That remained the case until the farm was sold in 2016, a year after Howard Bender passed away. Sondra Bender had preceded him in 2012. While the idea of selling the farm had been on the table for quite some time, no one affiliated with the Frederick County property was prepared for how rapidly a buyer stepped forward that September.

Celebrating his wife’s 60th birthday with a trip to Italy, Murray was shocked by a phone call informing him that the horses needed to be removed from Glade Valley within a week. Needless to say, panic ensued.

“Larry called me and asked if I could take the Glade Valley retirees. Luckily I had an open paddock and the old stallion barn, since we don’t have stallions anymore at all,” Laurie Calhoun said. “It was set up perfectly for La Reine, so we took him, three geldings and eight of the old broodmares.”

The Benders’ daughters, Barbara Bender and Eileen Greenberg, were determined to offer their parents’ stock safe and happy retirements. To that end, they have made provisions for the horses’ care and expenses for the remainder of their lives.

“I took La Reine off the trailer and he pretty much told everyone on the farm –
human and equine – ‘I’m here,’ ” Calhoun said. “He just stood and called to the other horses; he definitely announced himself. He has not been gelded. He is
22 and we really did not want to put him through that at his age. Once they have been a breeding stallion they tend to be a little territorial and they don’t know how to handle themselves around other horses. They have their space and that’s the way they like it. That’s the way La Reine is. We have fence rows, and he loves to go over and chat with the other horses. He’ll hang out there and then he’ll go graze and go over to the other side to see those horses. He has great manners, but he likes being on his own.”

Murray visits regularly, bringing supplies and donations. And Mike Figgins, Glade Valley foreman for over 40 years, heads to the Calhouns’ place twice a week to mow the grass.

“He said he was bored in his retirement,” Murray laughed.

So, in truth, very little has actually changed for La Reine’s Terms other than his zip code.

“We sent him over there with a bag of peppermints and Laurie never lets it run out. I think that’s all he cares about,” Murray said. 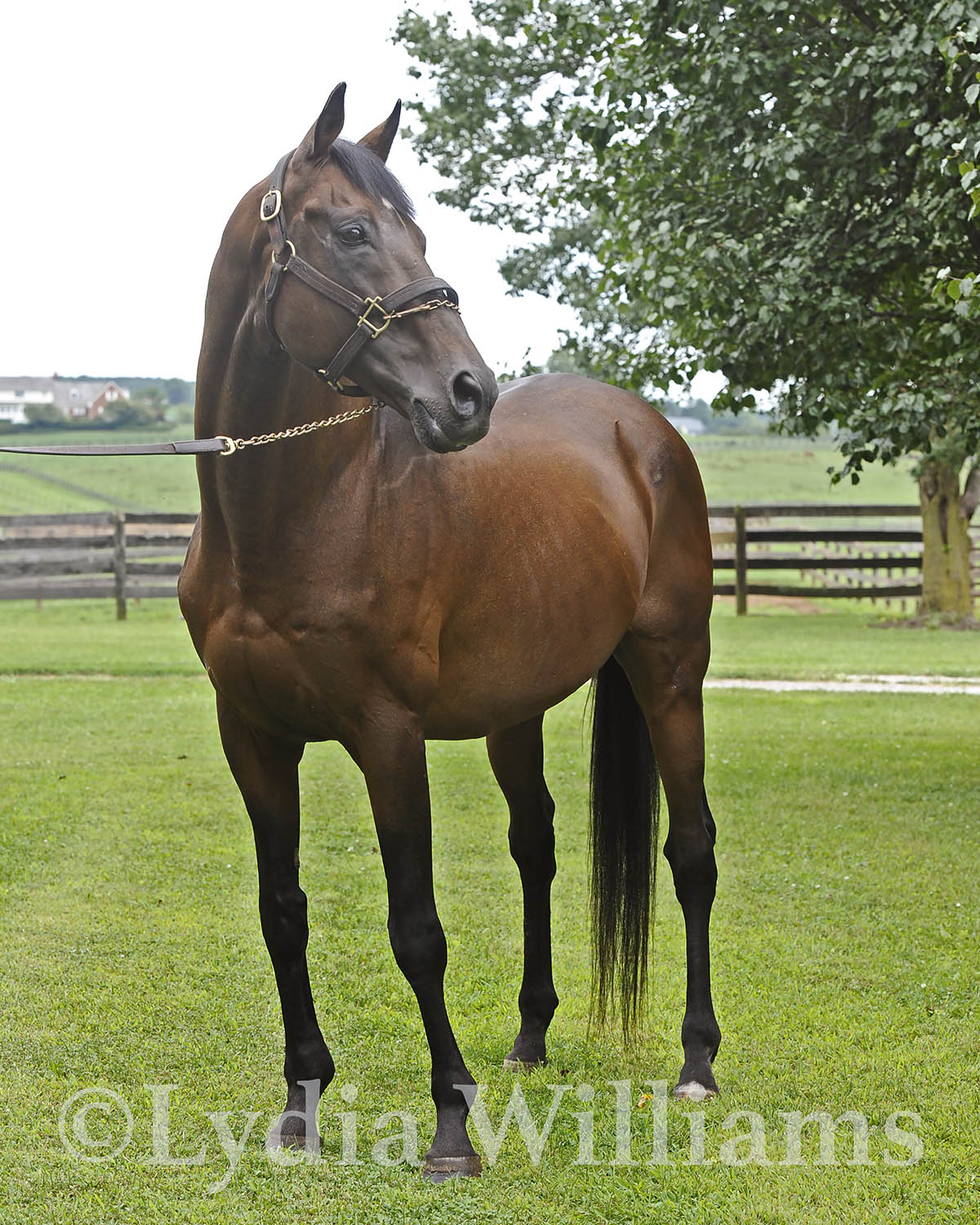