The story of Liz Currey Silva and Won Mugg started with a chance encounter in a tack store around 15 years ago. Silva, then in her early 20s, had a small operation retraining off-the-track Thoroughbreds for eventing. While on staff at Bit of Britain, a local saddlery in Oxford, Pa., she was approached by trainer Wendy Kinnamon, who wanted to know if Silva knew of anyone who’d like a job galloping racehorses.

“Well, then you’re brave enough,” Kinnamon said. “Come on out.” 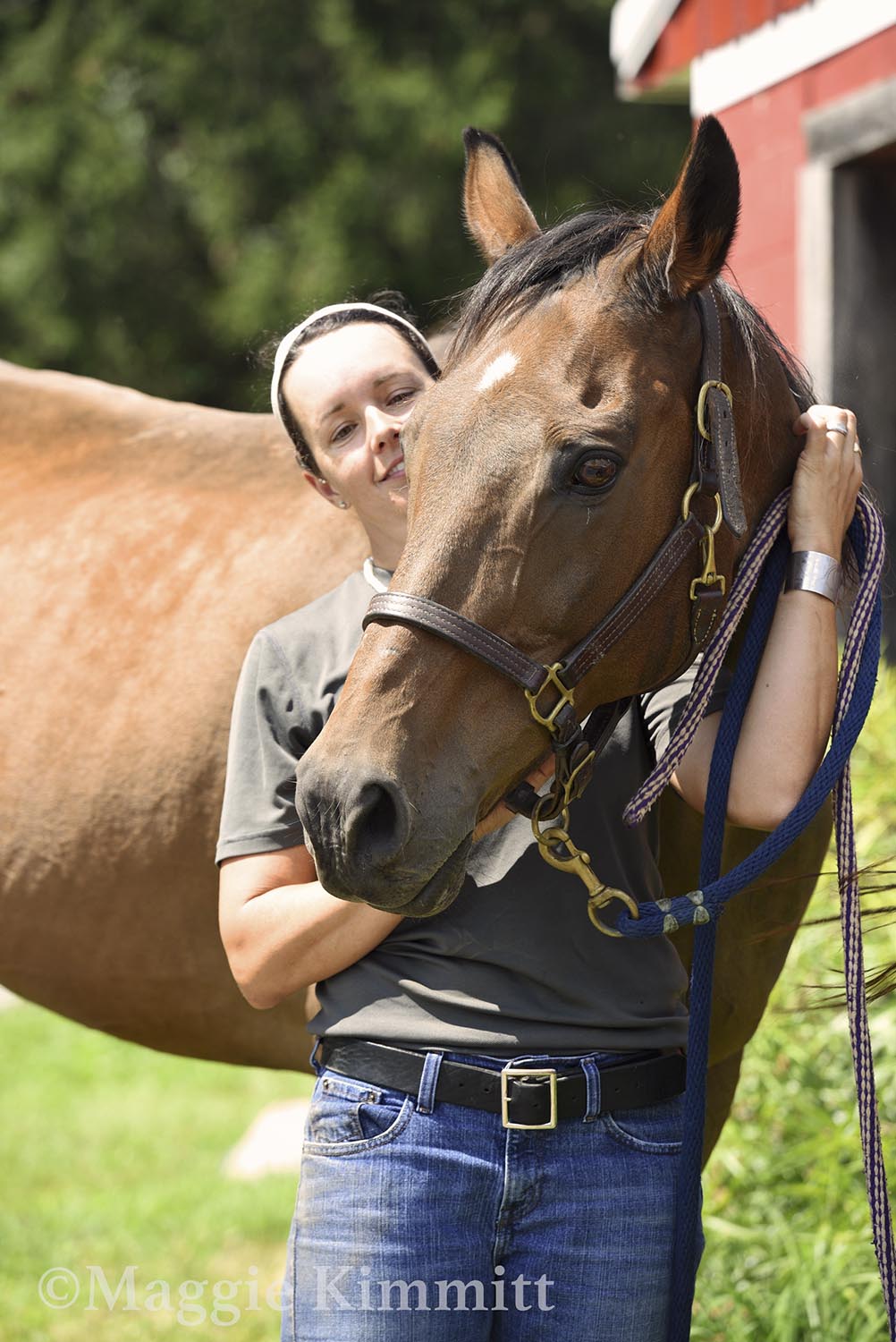 About a year into the gig, she was paired with a fretful, neurotic gelding sent to the Kinnamons by trainer Tracy Nunley. Full of quirks and idiosyncrasies, he needed farm life and a calm environment.

Named Won Mugg, he belonged to Nunley’s father, John Porter, who had purchased him as a yearling for $7,000 at the 1999 OBS Winter Mixed Sale. Bred in Florida by Junior deLisser, Won Mugg was by top local stallion Jeblar, a son of Alydar. Dam Medieval Dawn was an unraced daughter of *Grey Dawn II.

“At the Kinnamons we would groom them, take care of them, ride them, cool them out,” Silva said. “We did everything with them. I went racing with Mugg. I’d have to ride in the back of the van with him and put my arms around his neck to keep him from weaving, and he’d put his chin on my back. He was ridiculous. And I got so attached to him.”

When Won Mugg headed south to Tampa for the winter with Nunley’s operation at the end of 2000, Silva kept tabs on him, hoping for a reunion the following spring. Instead, the horse was sent to Nunley’s Fair Hill barn. As it happened, Silva’s friend Lucy Emerick was working for Nunley then. Knowing how Silva felt about the horse, Emerick let her know that he was back. . . and that he was scheduled to run for a $3,500 tag at Penn National.

“I went to the barn and talked to Lucy in the morning after I was done galloping at Delaware Park. Then I went home and got my horse trailer and all my cash; I had borrowed some money off my parents. And then I came right back and got him.”

In the span of three years since Silva last saw him, Won Mugg had run at tracks up and down the eastern seaboard from Gulfstream Park to Meadowlands. When Silva and her cash transaction closed the curtain on his career, he had made 35 starts and recorded a record of 2-7-3 with earnings of $69,568. 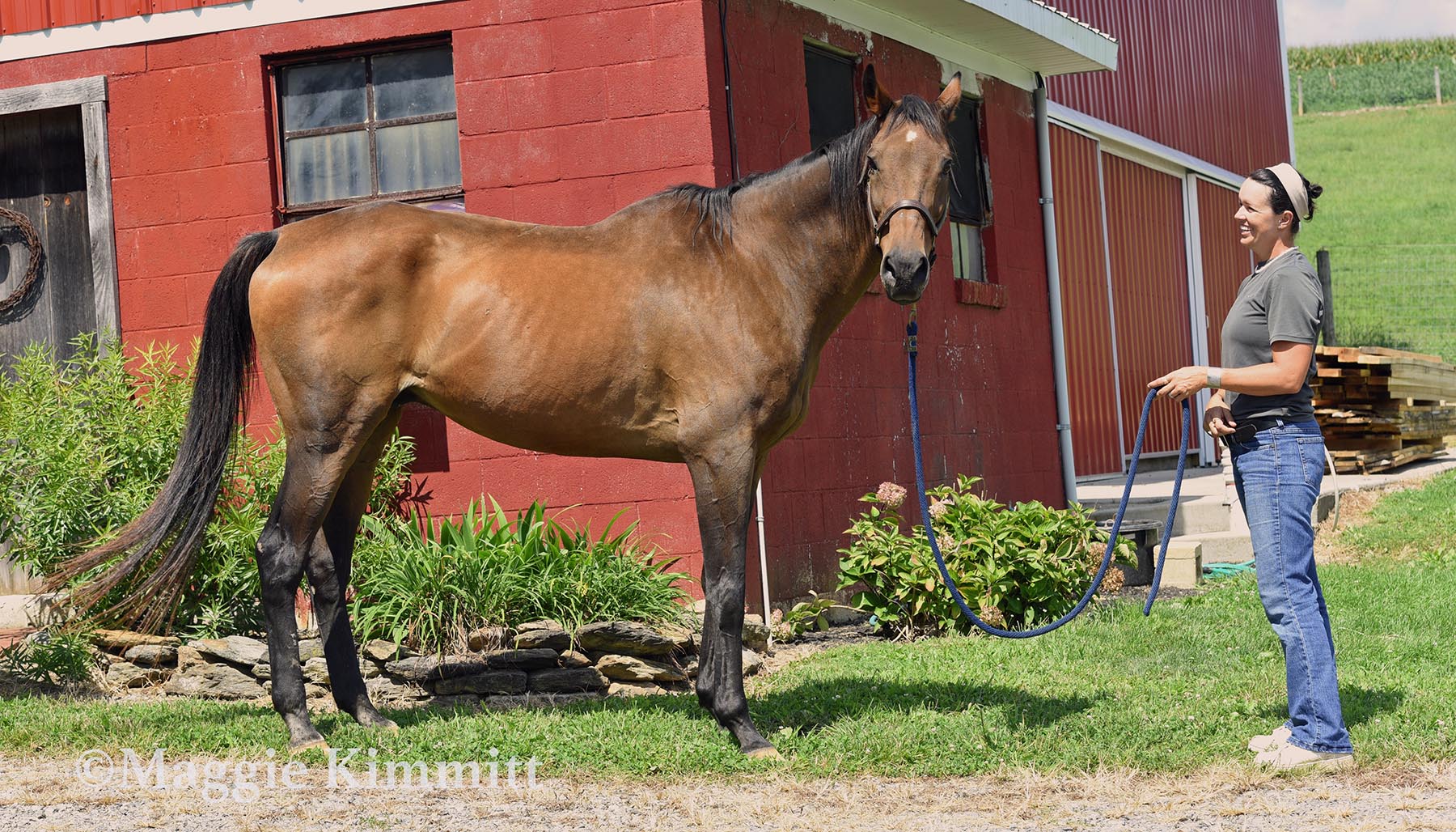 Technically, Won Mugg was brought home as another project to be re-schooled and re-sold. At least that’s what Silva told her parents. Truth was, he was never going anywhere.

Historically, the 17.1-hand bay had been a dreadful keeper. Throughout his life, his caretakers always struggled to keep weight on him. Silva fought the same battle.

“I tried everything to put weight on him. I didn’t ride him for almost a year after I got him,” she said. “It took him some time to adjust when he got to our farm – he thought that he’d been sold. But then every day he’d see me and he was always like ‘You’re still here!’ It was so hard for him, but I spent a lot of time with him. He’s a very nervous, emotional horse.”

When Silva was finally able to begin some re-education, she was encouraged by how much ability he had. A natural athlete who could “jump the moon,” he relished not only his new job but also the constant attention. He had done well at some small jumper shows and was preparing for his first event when the plan got derailed. While schooling on the flat one day, Silva noticed that he was having trouble with 10-meter circles to the left and wouldn’t pick up his left lead in the canter.

“He’s a very cooperative horse, and he was panicking – so right away I knew something was wrong,” she said. “I know him too well.”

A visit to Dr. Bill Riddle’s Cecil Veterinary Clinic in Port Deposit, Md., revealed aggressive arthritis, causing Mugg’s right ankle to fuse. Almost as quickly as it had begun, his second career was over. Silva continued to trail ride him a bit until it became clear that even that light activity was too much. He would end up so stiff the next day that she decided to retire him completely to a life of leisure on her parents’ farm.

Set on 74 acres in Drumore, a pastoral hamlet in Lancaster County, Pa., Covenant Springs Farm is now home to three other horses Silva has brought home over the years. Won Mugg shares his paddock with his constant companion, a dark bay gelding known only as Frugal. Silva knows a bit of his story, but the dark mottling on his lip makes all but one number of his Jockey Club tattoo illegible.

“We swear every year when he loses weight over the winter that Mugg is not going make it,” Silva said. “He’s just never ever been a horse than can carry weight. I would soak beet pulp and alfalfa cubes for him and he was eating 20 quarts of senior feed with every supplement under the sun – but no. That’s just him. He wasn’t gaining weight this summer with the grass, which he normally always does. So my dad started feeding him Calf Manna and now he’s dapples head to toe – which he’s never had.”

Two grays grazing in the next field were former trainees of Silva’s employer, Graham Motion. Dr No (GB), a 5-year-old son of Aussie Rules, was owned by Prince Faisal Salman. After making six starts in England as a 2-year-old, he ran twice in the United States before being sidelined by injury and eventually retired. When word got around that Dr No’s owner was looking for a forever home for the gelding, Silva raised her hand.

That hand shot up again last year when another of Motion’s former charges, Jane Peterson, became available. The daughter of Exchange Rate had channeled through the claim box, finally ending up with Greg DiPrima in New York. DiPrima thought enough of the mare to notify Motion’s office when he felt it was best to retire her. Now 6, Jane Peterson became the surprise Christmas gift last year for Silva’s 11-year-old niece whose name, incidentally, is Alice Peterson.

These days, Jane and Alice are inseparable – just like Won Mugg and Aunt Liz. 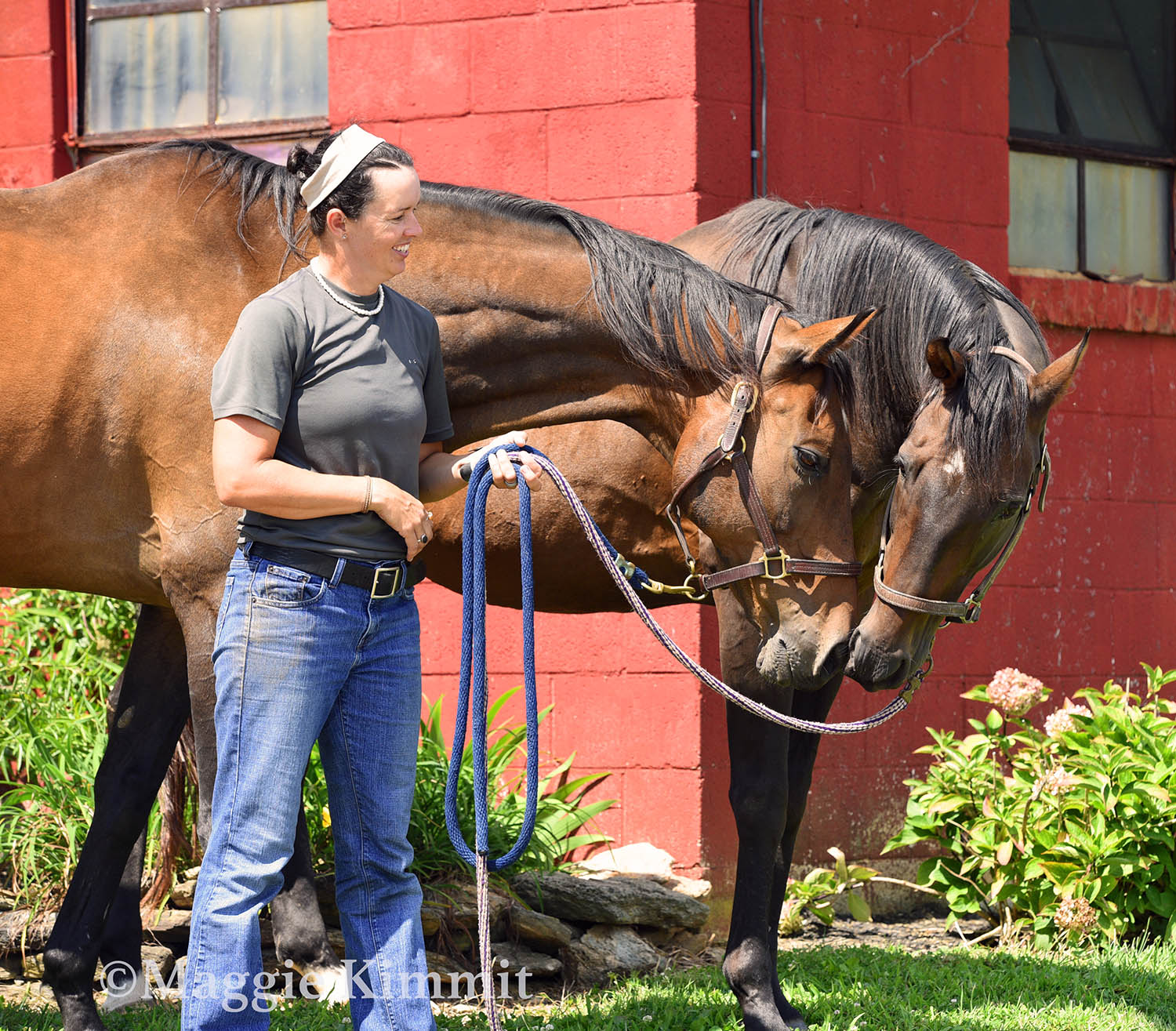