My husband passed away seven years ago, so it’s just me now. But I keep referring to ‘we.’
This is our farm; we bought it when we first got married.”

It would be nearly impossible for Robin Townsend to relay any account of her life with Thoroughbreds without referring to Donald Townsend. And the story of two special homebreds has the late Maryland trainer written all over it.

The couple met when both were working for a firm that supplied staff for Standardbred auctions. A schoolteacher by profession, Robin was a native of Allegheny County, Md., who had grown up competing at local horse shows. Donald was a Vietnam veteran and the son of a trainer. Racing was a hobby to the elder Townsend, but upon his return from the war, Donald turned his avocation into his vocation.

Upon their marriage they purchased a 14-acre parcel in Keymar, Md., that had originally been part of Terra Rubra (Red Earth), the 1,000-acre farm which was the birthplace of Star Spangled Banner author Francis Scott Key.

“It’s the actual site of the home where Francis Scott Key was born. I can look off my front porch and see the house. It is an historic landmark,” Robin said.

The Townsend property is also the birthplace and home of Thoroughbreds Chicago Called (“Oscar”) and Ozzie Murdock, both now 21. 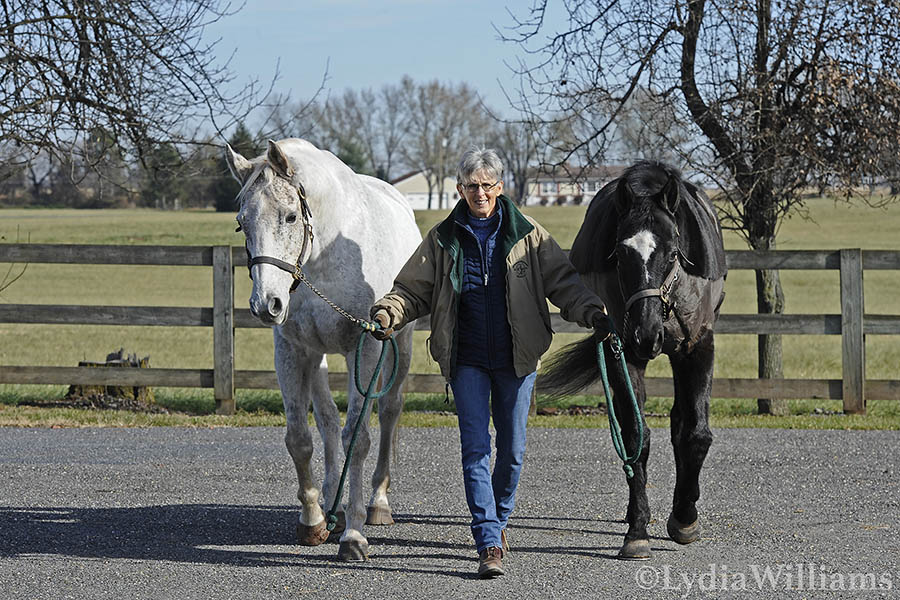 “They were out of mares that my husband purchased who knows where. He was always kind of wheeling and dealing. I know Oscar’s dam came to us as a bag of bones from a farm in West Virginia. She was maybe a $500 mare, and the stud fee on the stallion was $500. Laurie and Jerry Calhoun had both Aaron’s Concorde and Dover Ridge [at nearby Summer Wind Farm] at that time, so we bred both mares there,” Robin said.

“And I know that we got the dam of Ozzie Murdock from Terri Thompson, who is a longtime Maryland horse breeder. They had tried to race her and she wasn’t going to be much, so we got her for next to nothing. That was Donald’s thing. He loved to research pedigrees and look at nicking. We didn’t have big pocketbooks to be able to go to top-notch stallions for sure. That year, I think they were the only two mares that we ourselves bred.”

Chicago Called’s lifetime record could perhaps best be summed up as “unremarkable.” By Aaron’s Concorde out of the Medieval Man mare Medieval Moat, he made six starts, finished third once and earned $1,800. By the Riva Ridge stallion Dover Ridge, Ozzie Murdock was produced from Britesparkle, by Private Terms. He never hit the board in his 11 career starts, earning $1,125.

And not one bit of that mattered to Robin or Donald Townsend.

Chicago Called was foaled on the evening of March 24, 1997, and earned the nickname Oscar because he made his grand appearance during the Academy Awards broadcast. Ozzie Murdock was born a few weeks previously, Feb. 28, with a much more troublesome beginning. 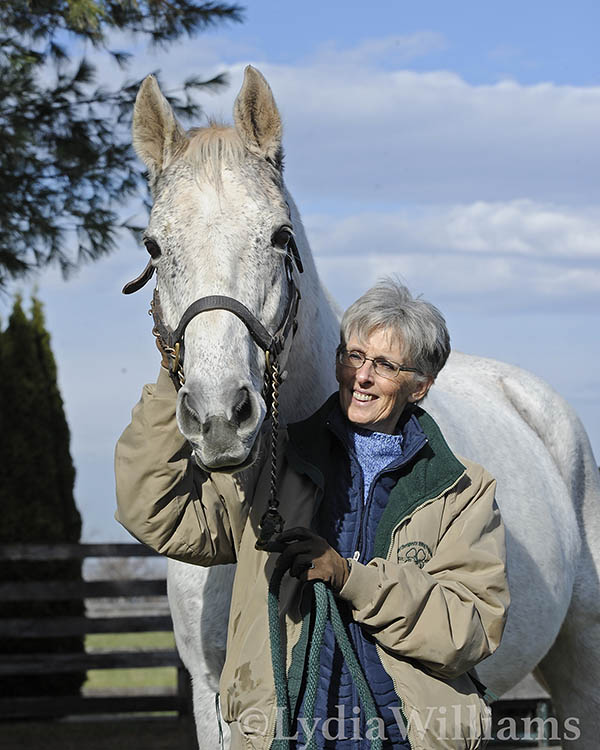 “He was Britesparkle’s first foal, and she produced no milk – I mean none. At about 3-4 days, she did produce a little, but it was enough that he would no longer take Foal-Lac. So we were in kind of a bad spot, and our vet suggested goat’s milk. So he ended up being bottle-fed goat’s milk until he was 61⁄2 months old because I was like ‘Nooo, I have to keep going longer to make sure he’s strong and big!’

“The interesting thing was we kept him with his mother because we felt like he needed to be socialized. And she was a good mother, but we tried to get him on a bucket and that didn’t work because the mare drank the goat’s milk. She loved it; thought it was great stuff.”

To further complicate an already dicey situation, the gray colt needed a plasma infusion after his birth. Robin was never sure whether he subsequently suffered from dummy foal syndrome or a reaction to the transfusion, but he lost all coordination and was unable to nurse.

“We’d have to pick him up, and he was like a board – his whole body was rigid. I would stand him up and say ‘You are the great and powerful Oz!’ So from there he became Ozzie. The Murdock came in because the very first man who sold us goat’s milk was named Steve Murdock. He wouldn’t take any money for the milk . . . we just kept taking him alfalfa for his goats. So when we registered the foal, he became Ozzie Murdock.”

While their race records are similar, Oscar and Ozzie were – and still are – polar opposites. Small and late developing, Oscar was easy-going but timid. Quicker to mature, Ozzie was “an obnoxious brat,” Robin admitted. 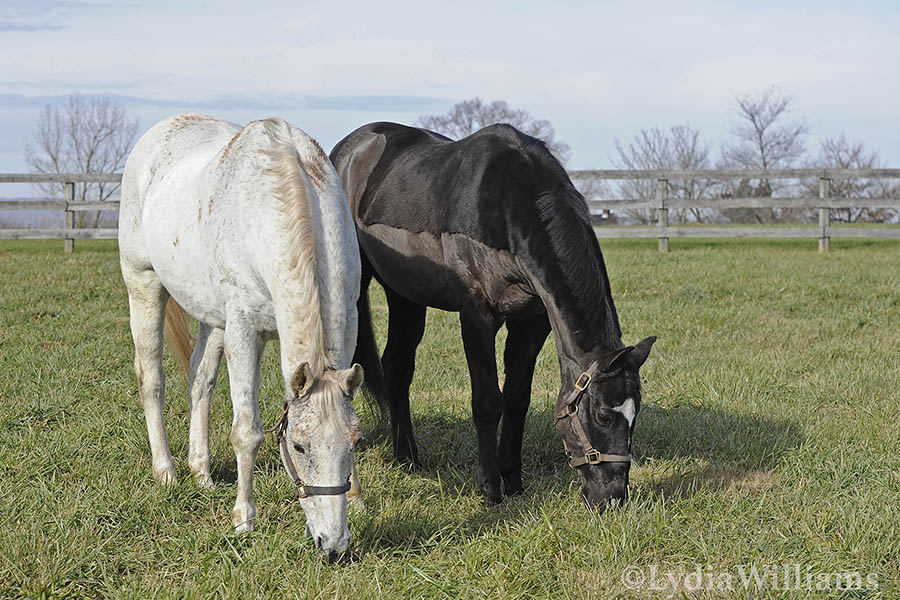 The Townsends always enjoyed taking their homebreds to the Maryland Horse Breeders Association’s yearling show every summer, and in 1998 Oscar and Ozzie were their only entrants. Judge Neil Howard saw enough in Oscar to pin him Grand Champion; Ozzie was fourth of 15 shown in the same class. The pride is still evident in Robin’s voice 20 years later as she talks about the day.

“We thought it was a great experience for our yearlings to go to the show and we enjoyed it. Oscar was the most successful, but we were also very proud of the fact that, for many years, we won the Groom’s Award in whatever class we were in. We probably won that eight or nine times. The final polishing, braiding, clipping – and I actually showed them – that was me. But Donald was the one monitoring the hay, feed, conditioning. We always said we could get our horses ready for the yearling show the week before that day because when a horse is doing well on the inside, it shows on the outside.”

Years later, Donald Townsend would joke that Oscar “peaked at the yearling show.” A failed myectomy caused him problems, and since he showed no real promise he went home to the Keymar farm. He was eventually gelded, but for a time Donald used him as a teaser. It wasn’t exactly up his alley, according to Robin.

Ozzie’s path was a much more broken road. He was claimed out of his first start, leaving Robin so devastated that she told Donald she was done with the racetrack. Donald always kept the business in per­spective, while Robin admittedly became extremely attached to Ozzie after his early difficulties. She tried in vain to convince her husband to get the horse back. 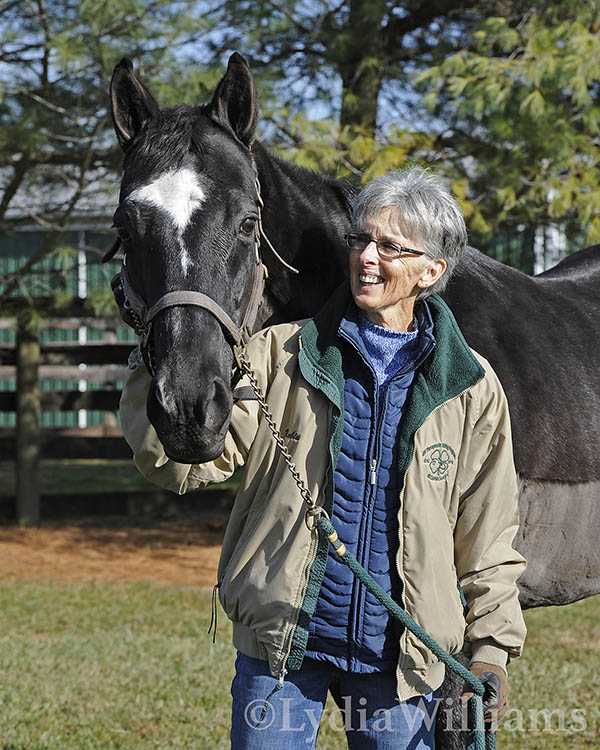 Three years later, she was stunned when a friend called to say that Ozzie was in that day’s entries at Laurel. Unbeknownst to Donald, she jumped in the car for Laurel where she approached his trainer before the race and identified herself. Leaving her number, she asked the trainer to get in touch if the current owner decided to retire Ozzie.

In six months – and much to her surprise – Robin got the call advising that Ozzie’s owner was very ill and would be dispersing all of his horses.

“Everything just had to line up. I’d never have known Ozzie was at Laurel if someone hadn’t called me. And I don’t know what possessed me to get in the car and go, because I had sworn I would never go back again. But then I took him to a place where I could ride, and I rode him for a few years before bringing him home to our farm. There’s a picture of Ozzie and Oscar on the first day they were reunited here. I am telling you, within minutes, they absolutely recognized each other. They immediately started scratching each other’s backs. So they have been together almost all their adult lives. And I don’t know that Oscar has ever been turned out with another horse other that Ozzie.” 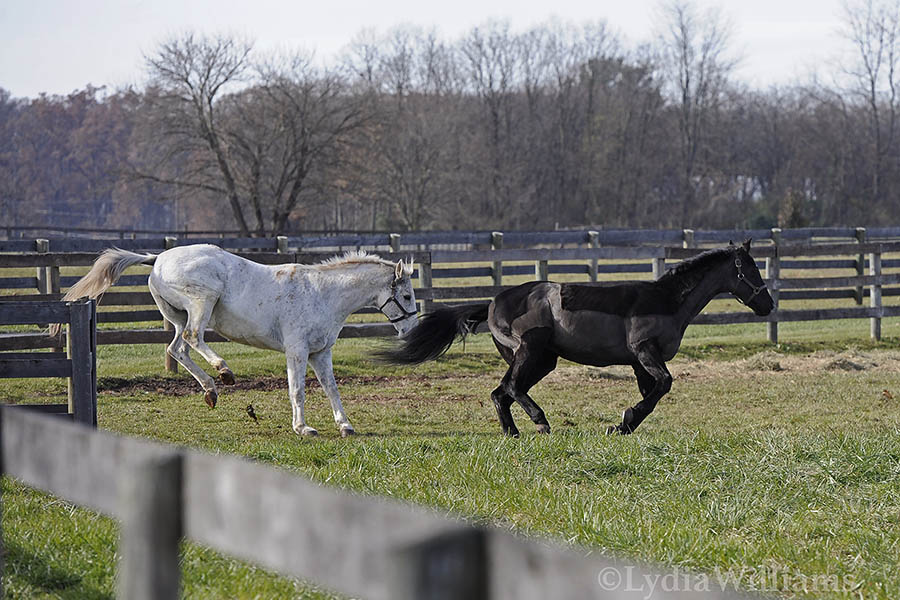