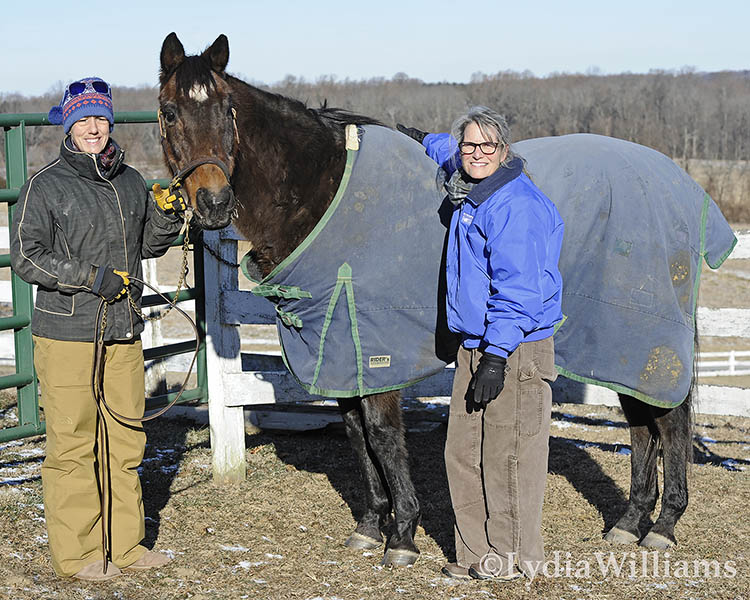 Ineluctability. Now that’s a word you don’t hear every day. It means inevitability; something not to be avoided or resisted. It’s also the official Jockey Club name of the now 31-year-old gelding adopted by Fran Burns 16 years ago. She calls him Ben, but the literal meaning of his registered name couldn’t have been more prophetic.

Burns found herself in the market for a new mount after losing a much-loved horse she’d had for years. Leads filtered to her, and her Monkton, Md., neighbor J.B. Secor advised that he knew of something suitable. Event rider Jill Adriani was then working for Secor, and was shopping for a horse to take her further up the eventing ladder.

Adriani practically grew up on Ben, the first horse she owned after graduating from the pony ranks. His previous owner, Ann Zouck, was reluctant to sell him to Adriani’s father as Jill was only 12 at the time. Ben hadn’t been off the track for too long, and Zouck wasn’t completely convinced the match would be a good one.

“I went on to do quite well retraining him myself and taking some dressage lessons on him here and there,” Adriani said. “We went through preliminary [level] in eventing. I competed in The Young Riders Dressage Championships on him and also many hunter shows. He was a pretty talented horse but just left a little bit in the scope that I needed to go on further in eventing. So the decision was made to sell him so I can get another prospect.” 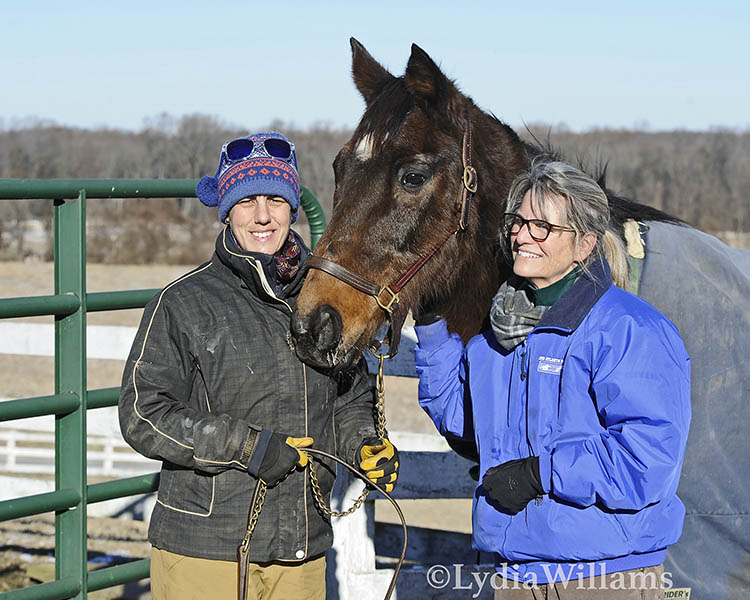 Ben was the first horse Burns saw in her search. Her checklist was simple. She wanted a horse who could jump a bit – enough for some lower-level local shows – and was good on trails. Trainer Jill French went along with Burns to provide recommendations and moral support. Oddly enough, Burns didn’t try Ben herself that day, choosing instead to watch Adriani ride.

“And then I did what every other horse person does,” Burns said. “I went and looked at gazillions of other horses but I could not get that first horse out of my mind. So [French] suggested we go back and check him out again. I rode him for 10 minutes and already knew that I loved him. I told Jill Adriani that I couldn’t afford to pay what she was asking, but I would make up the difference in his care. He would have a lifetime home with me and I would never sell him.”

It turned out to be an offer the Adriani family couldn’t refuse.

Burns didn’t know too much about her new acquisition’s history when she bought him, not that it mattered. But when Zouck surprised her with the gift of his foal papers, Burns was thrilled to put the puzzle together.

Bred in Maryland by Dr. Philip Torsney, the son of Horatius was produced from the Key to the Mint mare Key to the Dynasty on April 16, 1987. Ineluctability made every one of his 34 career starts in Maryland, with his sole win occurring in a maiden claimer at Pimlico Aug. 4, 1990, under Edgar Prado. And that was his finest hour; he finished second three times, was third six times and earned $25,540.

Zouck also shared one unusual bit of information: he had been involved in a barn fire.

“I’m not sure at what point in his life that had happened,” Burns said, “and I believe it had been at Pimlico. We used to hot-shoe him and had noticed that he really did not like the smell of smoke. So it all made sense.”

Through social media, Burns tracked down one of

Dr. Torsney’s daughters and informed her that she had one
of his homebreds.

“I saw that she was talking about Horatius on Facebook, so I sent her a private message. She was so excited,” Burns said. “I sent her a copy of the win photo that I have of Ben, and she was over the moon.” 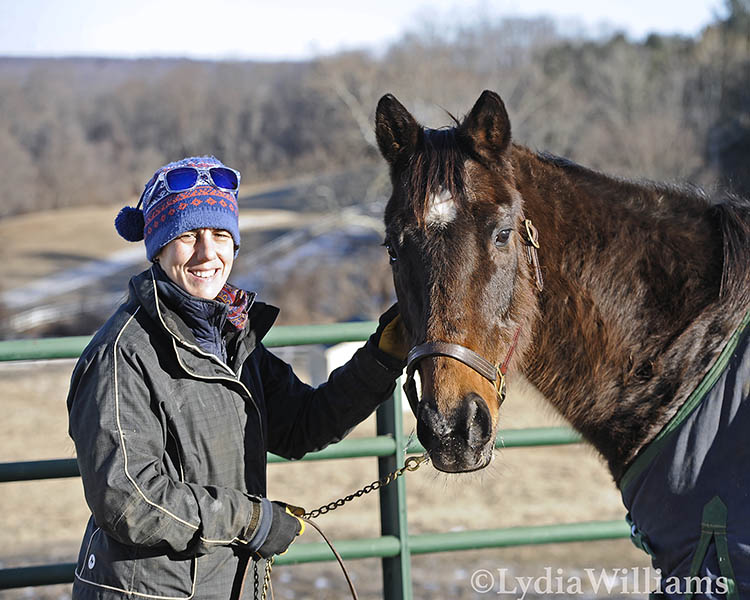 These days, blacksmiths and veterinarians who visit Burns’ 11-acre Boxwood Farm in Monkton all refer to Ben by his unofficial moniker – “The best horse in the barn.” No longer ridden, he’s the lead example to the four additional equine residents on the property.

“I always tell Ben this is his farm,” Burns laughed. “I have five here now. I’m an old-horse boarding operation; I don’t take young horses. We take the ones that have issues and special needs. You have to have owners who are willing to spend the money to keep their lives going like that. And we do full care. All except one are Thoroughbreds; I have a Quarter Horse here too.”

A lifelong horsewoman, Burns’ pedigree is as deeply Maryland as is Ben’s. She grew up on her family’s Happy Hopeful Farm on West Padonia Road in Baltimore County, a few miles up the road from Timonium. Her mother, Frances Gould Fox, still lives in the same home on the parcel of land the family retained. Her great-grandfather, John McPherson Dennis Sr., was president of Union Trust Co. and served as president of the Maryland State Fair during the 1930s. The annual Maryland Pony Show was a big favorite growing up, and she shared fond memories of her mother, often still in her flowered hat and white gloves worn to garden club meetings, driving their dark blue van to horse shows. 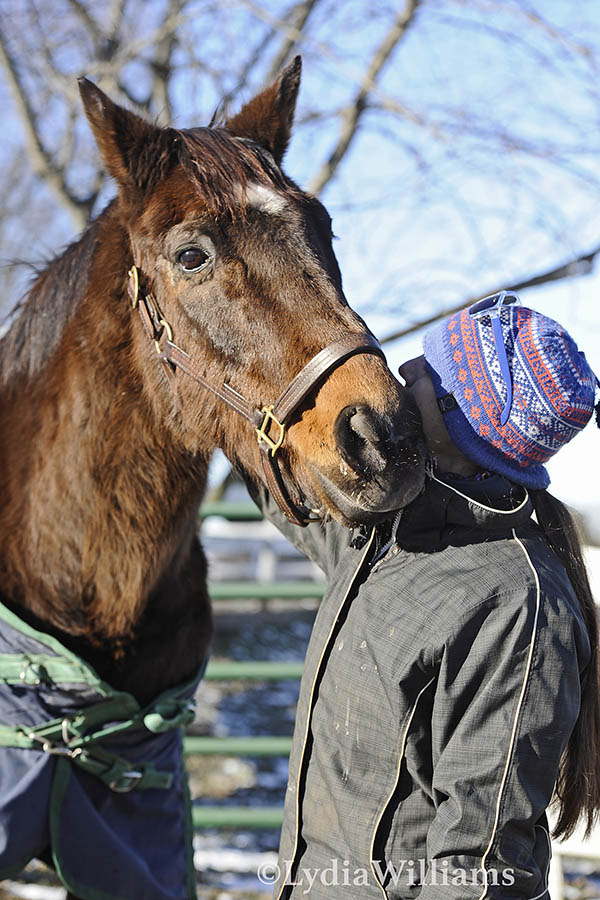 A broken pelvis years ago cut Burns’ time in the saddle down to a bare minimum, but she does still occasionally hop on Garcon d’Or, a 15-year-old Private Terms gelding she adopted from Angel Acres.

“I now live vicariously on the ground with my horses, which is unfortunate,” Burns said. “Every now and then I’ll hop on Garcon and putz around a bit, but I always end up paying for it for days later.”

Jill Adriani and her father drive past Boxwood Farm fairly frequently and often stop by to feed Ben his favorite green and white spearmints.

“It was really my dad who talked me into letting Fran purchase him for a lot less money than we were asking, as he agreed that he would have a great home with her,” Jill said. “And she did guarantee she would never sell him. She has kept her promise, and my father and I have stopped in time to time over the years to see him. I know he has lived a truly great life with her, and you can’t ask for anything more than that. He will always hold a special place in my heart.”

“I believe in fate and think that everything happens for a reason. I fell in love with Ben the minute I saw him and I didn’t even ride him that day. After I looked at a million other horses, I said to Jill [French] ‘I think I found the horse. It’s that very first one we saw.’ ”

You could say it was ineluctable. 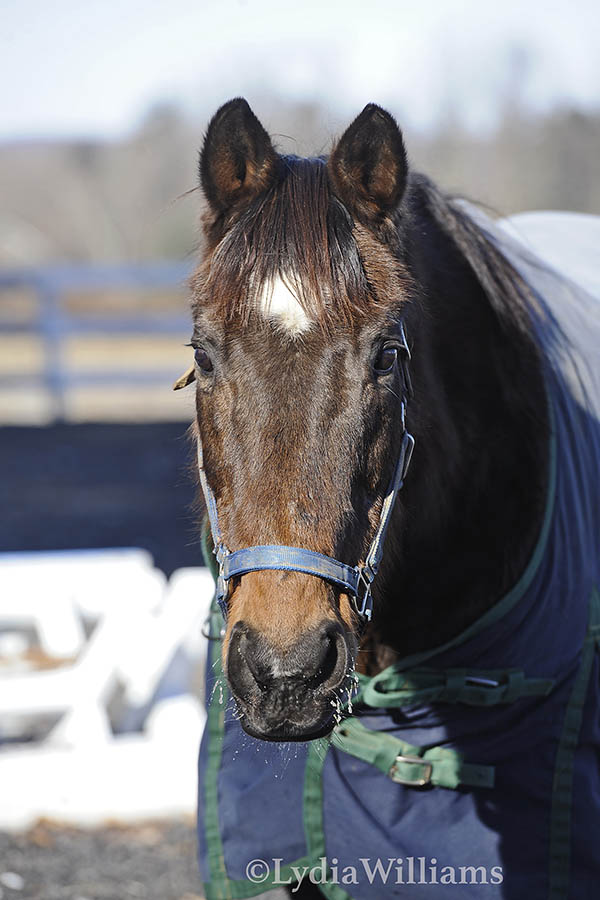 Have a Pensioner with a story to tell?

This is one of our readers’ monthly favorites and we would love to hear from you.

Contact our Pensioner on Parade columnist
Maggie Kimmitt: This email address is being protected from spambots. You need JavaScript enabled to view it.