Ten minutes southeast of downtown Richmond in Varina, Va., a wooly-coated dark bay horse stands snoozing and sunning himself in a paddock. The sign hanging on a wooden post at the head of the driveway of the 12-acre farmette reads “Warwick Stable.” Thanks to urban sprawl, the neighborhood is now largely residential. But little else has changed since the property’s owner, avid breeder and owner Albert “Bert” Allen Jr., passed away in January 2011.

His daughter, Hillis Allen, still lives in the house across the street. His son, trainer Ferris Allen, still ranks as a fixture on the Mid-Atlantic racing circuit. Both grew up on the homestead their father built. And the dark bay horse, Christopher Knight, still thrives there at the remarkable age of 35.

Christopher Knight is as much a thread in the Allen family fabric as any of Bert Allen’s progeny. Foaled on February 15, 1983, he was bred and owned by Ferris Allen’s longtime client Victor Frankil and his late wife Nancy Lee’s Nancy Lee Farms. Trained throughout his career by Gary Haines, the horse’s roots are as Maryland as crabcakes and Natty Boh.

His sire, multiple stakes winner Christopher R., blazed along the eastern seaboard during the mid-1970s. The homebred for owner Art Rooney’s Shamrock Farm trained by Beverly “Tuffy” Hacker won 22 races (16 stakes), earned $405,515 and stood at Shamrock upon his retirement where he died of a heart attack at 21 in 1992. 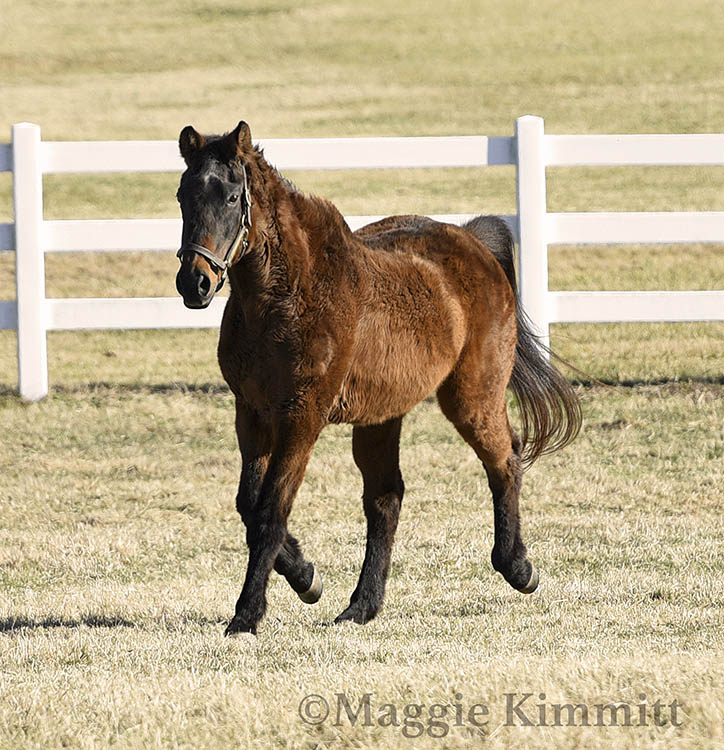 Christopher Knight replicated his sire’s speed and durability in a career spanning eight seasons with 89 starts. More blue-collar than suit and tie, his battles were claiming or allowance races. But he is remembered as a rugged competitor. News that the horse was alive and well met with delighted awe.

“OMG I remember him!” replied the Maryland Jockey Club’s Georganne Hale via Twitter message. “I can’t believe he is still alive and looking so good! He was a hard-knocking racehorse!”

Christopher Knight’s bottom line serves as further proof that the old gelding has lived up to his DNA. Dam Knightly Kiss was by Knightly Manner, a multiple stakes-winning son of Round Table. Bred in Kentucky by Claiborne Farm, Knightly Manner made 67 starts from 1963-66 and earned $436,676. He stood at Merryland Farm in Hydes, Md., from 1967-74 before being sold to England and subsequently Australia, where he died in 1993 at 32.

One of the best horses of the 20th century, Round Table won six championships including Horse of the Year in 1958. Inducted into the Hall of Fame in 1972, he passed away at 33 after a lengthy stud career at Claiborne Farm. He is buried in the farm’s fabled cemetery along with Secretariat, Bold Ruler, Buckpasser, Nijinsky II, Mr. Prospector and Round Table’s sire *Princequillo among others.

Christopher Knight wrote his own story on the racetrack, setting a record of 1:08.40 for 6 furlongs at the old Marlboro oval in 1988, statistically the best year of his career. He entered the gate 17 times that season, winning 11 and finishing second five times. Debuting as a 2-year-old in 1985, he won at least one race each year through 1991. He returned at 9 in 1992 but retired that February after three lackluster efforts. The Frankils took him home with a record of 89-21-16-12 and $155,718.

“I was always very fond of him when he was racing,” Ferris Allen said. “He was kind of a fan favorite. He just won races everywhere and he was also a character in the morning – quite incorrigible. The horse was just a fabulous, hickory racehorse.” 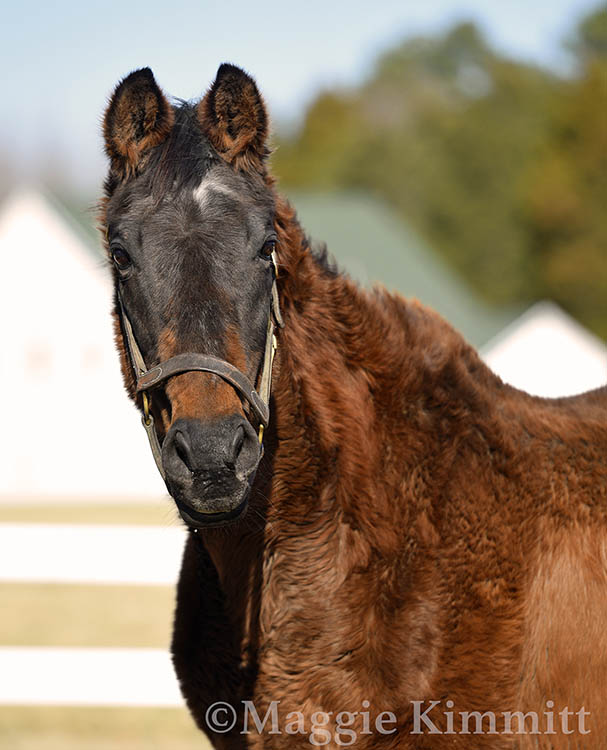 “I didn’t really have to buy him, I just knew he was available and thought he’d be a neat project for her. I was training for Nancy Lee Farms by then and he was retired on their farm. They were looking for something to do with him.”

Then a student at River Hill High, Jane was working at a local tack shop and aspiring to compete in the hunter ranks. Warmblood breeds were all the rage at the time, and she found one available for lease. Her father saw no point in an outlay of cash with so many available candidates at his disposal.

“You can have any horse you want that’s not gonna cost money,” Allen told his daughter.

“Along the way he had done stints as a lead pony and also as an escort for breaking yearlings,” Ferris said. “At the track he was great with everything except being behind the starting gate – that got his juices flowing.”

Plenty got his juices flowing. Jane fully embraced the idea of reschooling him for the show ring, but she always had her hands full.

“He was beautiful – he still is. But he was hard. Chris was my first OTTB, and he was the rogue-iest horse that I could have found. My mother was like ‘This is not the horse you want. . .’ But you know what they say about those old war horses. He was my start. I’ve always been enamored of Thoroughbreds, since I grew up with them. Now I enjoy the shows and the hunter breeding. I’ll be competing in the Retired Racehorse Project for the fourth time this year. This OTTB phenomenon has really molded my two worlds together.”

Chris retired to Bert Allen’s Varina farm in his mid-20s to live as a companion to Allen’s best homebred, the graded stakes-placed Miracle Wood. 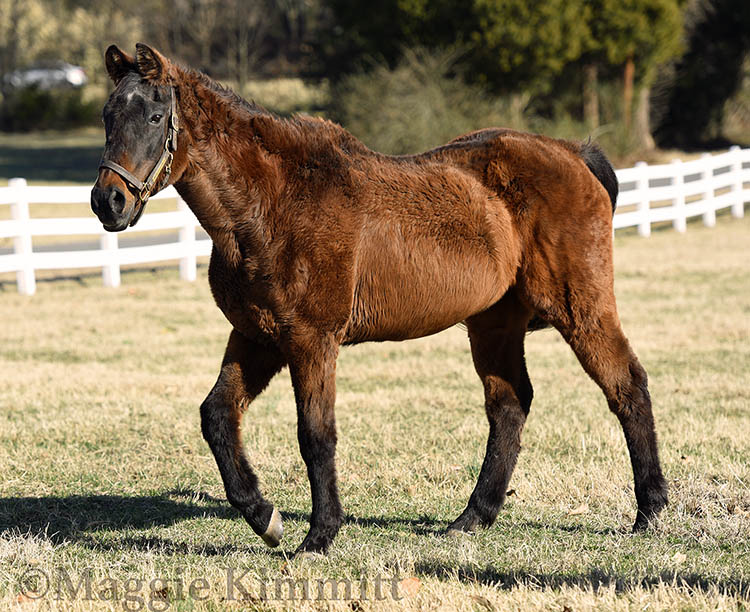 “The house was built in 1950, and every time a horse won some money Dad put something on the farm,” Ferris explained. “So the swimming pool was built in 1959 because he had a horse named Shindig that won five races in a row at Shenandoah Downs. Miracle Wood built the newer barn there and put in all the fences, and a filly called Muskrat Love pitched in a new tractor.”

Since late 2016, the farm has been leased by Kathryn Costley. The Henrico County schoolteacher and her boyfriend, Maryland assistant starter Hugo Garcia, break and train for the racetrack. Chris was part and parcel of the deal when they moved in, and they were happy and honored to assume the role of caretakers.

“I can look out and see Chris from my house,” Hillis Allen began. “The blacksmith just marvels every time he comes to trim his feet that he takes off running as old as he is. He loves being outside and does not want to be in a stall. He has a run-in shed he can go in. When we had snow, Kathy put his hay in the shed but he just drags it outside.”

“Hillis says Chris is my boyfriend now,” Costley laughed. “He’ll come down to the barn and stand there with his head in just hanging out with me while I’m in there.”

Hillis Allen is sure her father approves of how life goes on at Warwick Stables.

“Dad would just be grinning about all of this.” 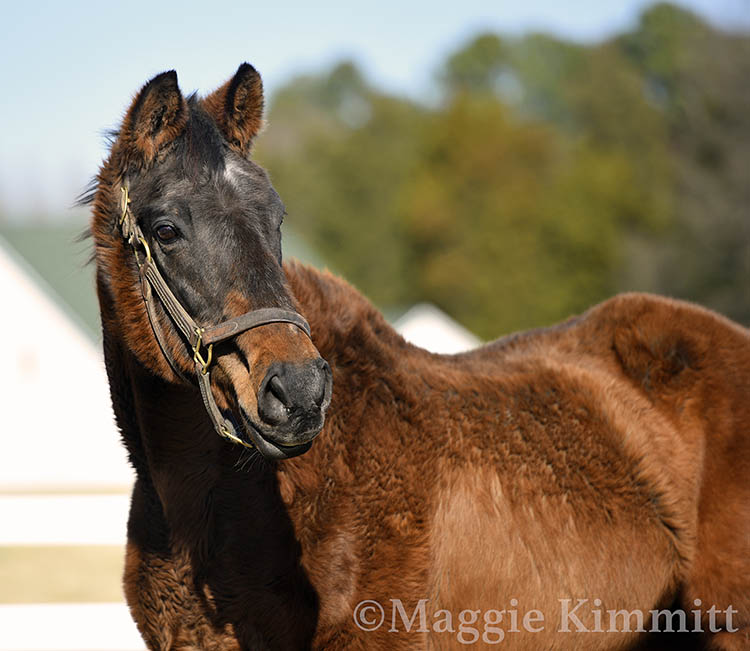