Details
From May 2018 Issue
Written by Maggie Kimmitt

Smitten. In simplest terms, the word means to impress favorably; to emotionally affect with a strong or sudden feeling. And in classic stream-of-consciousness rhetoric, it’s a word forever linked to 24-year-old retired broodmare Art Student.

The Kentucky-bred daughter of El Prado (Ire) and the winning Crafty Prospector mare Crafty’s Wish was purchased by the late Bill Backer’s Smitten Farm for $52,000 at the 1995 Keeneland September yearling sale. Sent to trainer Barclay Tagg at Laurel Park, she ran just three times as a 3-year-old at that Maryland oval in 1997 – winning all three, culminating in the Landaura Stakes – before joining Backer’s broodmare band at his property in The Plains, Va. Purchased in the 1980s by Backer and his wife, Anne Mudge Backer, the Smitten Farm name stemmed from Backer’s claim to have been smitten by the land and the very idea of raising horses and cattle on the picturesque acreage.

Bill Backer, who passed away in May 2016 at 89, earned fame and fortune as one of the most creative and prolific minds in the advertising industry. Developing slogans and jingles for mega-watt clients like Miller Lite beer, Campbell Soup and Nabisco, his magnum opus was undoubtedly the 1971 Coca-Cola commercial featuring the timeless “I’d Like to Buy the World a Coke.”

As a horseman, the Charleston, S.C., native and Yale graduate got his start in Thoroughbred racing in the mid-1950s when he and a partner spent $500 for a weanling. Named Wink Proof, the colt earned Backer his first win as an owner in 1956 at Bowie. Over the next 60 years, the Smitten Farm silks – royal blue emblazoned with the crescent moon and palmetto tree of the South Carolina state flag – were carried by generations of homebred stakes winners.

Maryland-bred Blind Date (Not For Love—Snit, by Fit to Fight) ranks as one of Backer’s best. Trained by Hamilton Smith, her wins included the All Brandy Stakes, Maryland Million Distaff Handicap, Pearl Necklace Stakes, Pimlico’s Hilltop Stakes on Black-Eyed Susan Day in 2009, and fittingly, the Virginia Oaks-G3 at Colonial Downs later that summer.

The gray Art Student made her own solid contributions to the Smitten Farm line. Her first foal to race, the Lear Fan gelding Air Brush, made 56 starts and earned $261,141. Viscount, by Orientate, brought $350,000 at the 2008 Keeneland sale of 2-year-olds and earned $163,905. Another Smith trainee, the Out of Place mare Art Show, was a solid and consistent allowance winner with plenty of black-type on her page, including a win in the Salem County Stakes at the Meadowlands.

“She never got pregnant, so I decided to ask Kim Clark of Leighton Farm to help me place her in a safe place,” said Deiter. “Don owned her for about 11⁄2 years. Kim Clark did a wonderful job; she is my go-to person. Art Student was such a nice mare and deserved a good retirement.”

At about that same time, Virginian Anna Purdy was looking for an older mare to turn out with her young horses. Purdy had grown up showing hunters and had decided that she wanted to improve her flatwork. She went to Lee Ann Smith’s Paradigm Farm in Warrenton, Va., where she met trainer Susan Cooney.

“Susan Cooney was my connection to racing,” Purdy said. “I loved watching all the babies foaled there. So it’s interesting that I went to a Thoroughbred farm to take dressage lessons on an Arabian mare and ended up involved in racing.”

“I started telling Kim what I wanted,” Purdy said. “I had two babies turned out and I really just wanted some age to the field. I rent a barn about 15 minutes from my house and thought it would be good to have a nurturing presence in the field. I have two little girls too, and I told Kim that I didn’t care if the horse was ewe-necked and moved like an eggbeater. I just wanted something really kind and quiet that would be great to the babies and be something my kids could brush. If they could ride around on her bareback that was a bonus.”

Clark had the perfect horse in mind. She immediately put Purdy in touch with Deiter.

“So I literally called Kelly, and the next day the mare stepped off the trailer,” Purdy said. “And when she did, my heart almost stopped. She’s gorgeous. She’s almost white, she’s just really well put together and so beautiful. She’s turned out to be one of my favorite horses that I’ve ever had. She’s amazing.”

Art Student, whose barn name had long been Artie, was re-christened Isla by Purdy.

The mare adjusted seamlessly to life with Purdy’s two youngsters, a German riding pony and a Warmblood gelding produced from the mare whom she had shown for years. Purdy’s two young daughters took to Isla immediately, grooming and caring for her and leading her around the field. And after observing the mare’s serene demeanor, Purdy decided to climb aboard one day.

“To my knowledge, I don’t think she’s been ridden since she was in training as a 3-year-old. I backed her when I got her – just started sitting on her and walking around. She’s just so gentle, you can tell she’s always been treated very well. She’s so trusting. I got on her and I don’t even think I had a bridle on her,” said Purdy. “It might sound silly to do, but if you knew her you’d understand. It’s one of those things where I feel like we have this great connection. My kids just climb around her and brush her, and she’s so aware and so careful of where their little bodies are.

“She’s so patient, she has this amazing maternal calm instinct. But she’s still very much a mare. She has an opinion, but the way she expresses herself is so gentle and gracious. We’re just so in love with her.”

You could say they’re smitten. 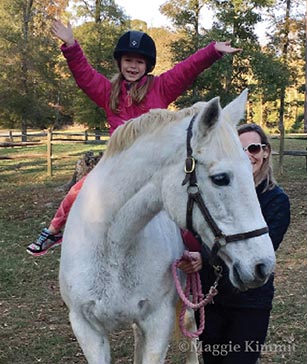