The barter system. Most horsemen, at some point, have put it to use. And it came into play 15 years ago when transplanted Irishmen Robbie and Joe Walsh – no relation – shook hands over a foal who ran until age 11 and earned nearly a quarter-million dollars.

Jump jockeys by profession, Robbie was riding out and helping Joe, who was by then working for Annie Jones in Unionville, Pa. Joe had some stalls and paddocks at Jones’ farm and owned a few mares. In 2002, Joe sent Alejandra’s Love (by Lord Carlos) to the Foligno stallion Fleg, standing nearby at his friend Charlie Lyman Jr.’s Maui Meadow Farm in West Chester, Pa.

An earner of $156,892, Fleg’s lone stakes win came in the race named for Lyman’s father, the General Charles B. Lyman Handicap at Philadelphia Park in 1995. Alejandra’s Love ran just twice, breaking her maiden in her first start and banking $6,780. On May 24, 2003, she foaled a gray colt Joe Walsh christened Azulyekit (As-you-like-it). 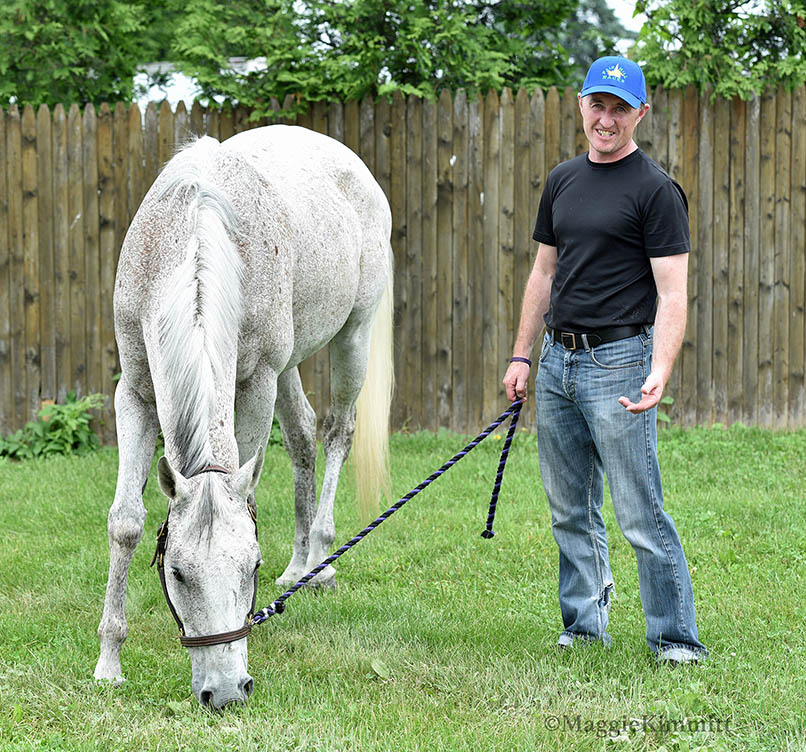 “I was there when he was foaled,” Robbie Walsh said. “Basically, Joe owned him and I was helping Joe out at the time. He said he couldn’t afford to pay me and I said, ‘Don’t worry about it.’ So he said, ‘I’ll give you a share of this guy.’ The mare had had a few foals who won races. Even though she wasn’t expensive, she produced a couple of runners.”

They collaborated on the development of the youngster, who took to his early lessons without turning a hair.

As a 2-year-old Azulyekit, called “Buddy” at home, was set to move to a stall at Fair Hill Training Center to work on his gate card. But before team Walsh could get the horse there he managed to get his foot stuck under his stall door, severely injuring a pastern.

Veterinarians came to treat the horse – more than one opinion was sought – and no one liked the way the foot looked. Surgery at New Bolton was strongly urged, at an estimated cost of $15,000. Dr. Bill Riddle’s Cecil Veterinary Clinic came in with a no-guarantee price tag of $7,500.

“We didn’t have anywhere near that kind of money to begin with,” Robbie said. “This was a horse by a $500 stallion out of a $1,000 mare. We didn’t even know what we had at that point; didn’t know if he could gallop much less be any good as a racehorse.” 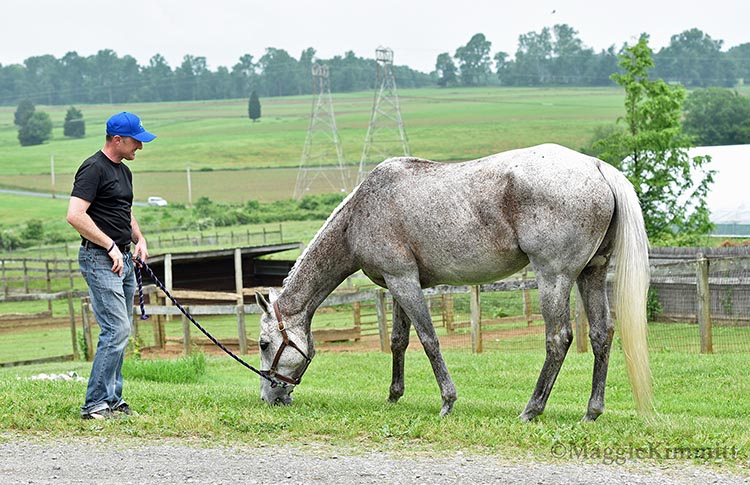 The one general medical consensus was that, without the surgery, laminitis would most likely develop in the next few days. When they asked about other options, Robbie and Joe were told they could always try for a “miracle cure.”

“We’re two Irishmen, so straight away we said ‘What’s that?’ ” Robbie laughed. “We were told we could treat him aggressively with antibiotics and penicillin and work on keeping the swelling down and the circulation going and all that. So we decided to give it a shot. He was getting penicillin twice a day, just rotating all over his body where we gave the shots. We worked on it with hosing, just horsemen stuff. . . what we’d learned over the years in Ireland and over here. Three days turned into three weeks, three weeks turned into two months. The vets couldn’t believe it.”

Buddy made it to the races the following year, debuting as a 3-year-old at Philadelphia Park in a maiden special weight July 17, 2006. With the late Paul Rowland as trainer, the gray gelding made six starts that year, finishing third twice before Walsh and Walsh gave him the winter off.

He came back in 2007 with Sheilagh Barndollar as the trainer and Joe Walsh and Carmel McCullagh (now Mrs. Robbie Walsh) the owners of record.

“I was working for Sheilagh at the time and she helped me out with Buddy. She had six stalls at Fair Hill. I’d get on horses for her to pay for keeping him there, and at the end of the month either I’d owe her or she’d owe me. It worked out well.”

At the beginning of 2008, the partners were approached about selling the horse as a steeplechase prospect. It was a decent offer – $45,000 – which Joe considered but Robbie dismissed, believing they could earn more in the Pennsylvania-bred races on the flat. He turned out to be right; Buddy’s record for that season alone was 7-2-2-1 and $90,283 earned.

“The real funny thing is, as a 3-year-old I had popped him over some logs,” Robbie said. “And it was a DISASTER. He was terrible; he kicked them out of the way, fell out over them. And I was like ‘You won’t be jumping fences.’ So then as a 5-year-old we were thinking of maybe turning him into a hurdle horse ourselves. So I took him out back and started jumping him over some logs, and he was every bit as bad as he had been the first time I tried it.”

Buddy and his connections kept rolling for the next six years. His final start was at Penn National June 28, 2014 at age 11 for breeder/owner/trainer Joe Walsh. When the ink dried, Jockey Club records for Azulyekit read 45-5-11-7 and $228,829 to his credit.

By then, Robbie Walsh had long been one of the leading steeplechase riders in the country. He’d been aboard for five flat races – four in point-to-points (including a win at Middleburg in 2012) and once at the Iroquois meet in Tennessee in 2014.

“He was funny. He had kind of gotten a bit sore as a 3-year-old early on at the farm, and he started lugging. And he never got out of the habit, even when he got back right again. And he was not easy to be on – to gallop, to breeze, to ride in a race – he was difficult. He wouldn’t steer. I still think it was because when I broke him I didn’t spend enough time long-reining him. He was so easy, so I figured I could just start on galloping him. I suffered the consequences of that later in life.”

Thanks to his connections’ patience and careful handling, the gelding’s soundness was never again an issue. He was honest, consistent and hard-knocking throughout his nine-season career.

After his retirement, Barndollar placed him with young rider Gabrielle Lehman, who retrained him and rode him in small hunter shows. He returned to Robbie Walsh two years later. Robbie now boards 15-year-old Buddy with Jen Knox at Top Rail Farm in Cochranville, Pa. 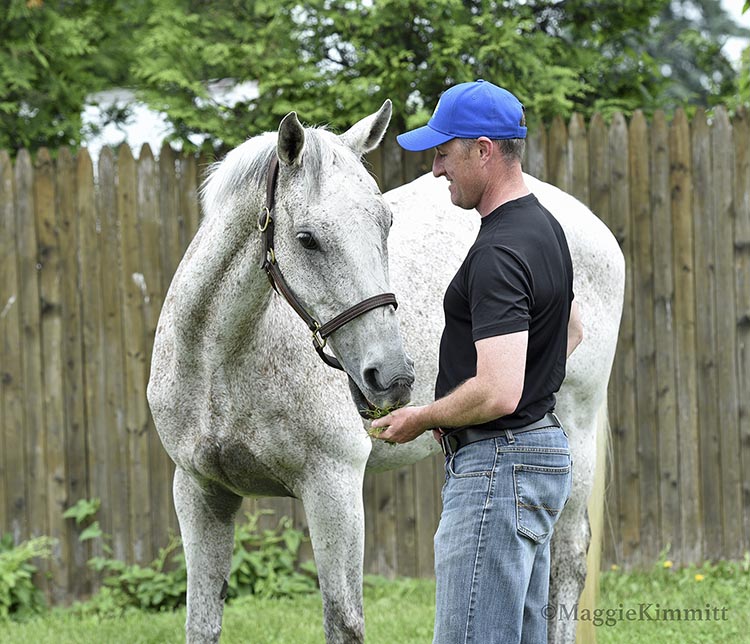 “Samantha Maroco [also 15] rides him now,” Knox said. “She just does the local hunter shows around here, like the Triangle Series, Chester County 4-H. He can be a little difficult, but she’s learning. This is the first horse that she’s had who’s been a bit green. He’s her first horse who’s not ‘made.’ So it’s a learning experience for her, but she’s a really good kid.”

“It just makes me laugh all these years later to see him jumping. It must have been me that was the problem. Or maybe me not wanting him to be a hurdle horse because he was doing well enough on the flat.”