In the summer of 2009, Wendy Uzelac didn’t want to look at, think or hear about another horse. Still grieving the sudden loss of her off-the-track Thoroughbred in a paddock accident that March, she was nowhere near ready to even contemplate his successor.

Jaguar Hope stole the photographer’s heart when she first saw him running for a $4,000 claiming tag at Great Lakes Downs near Fruitport, Mich., in 2007. Then 9, the son of Turkoman was big, elegant, nearly black and, to Wendy, the very embodiment of the ideal Thoroughbred. Within a year, he was hers – but her happiness was all too brief.

Like the rest of Wendy’s friends, I knew the feeling and understood the mindset. The abrupt losses are the hardest; the scars often run deep. I respected that . . . until one morning when a gray nose reached over a stall door and rested on my shoulder. 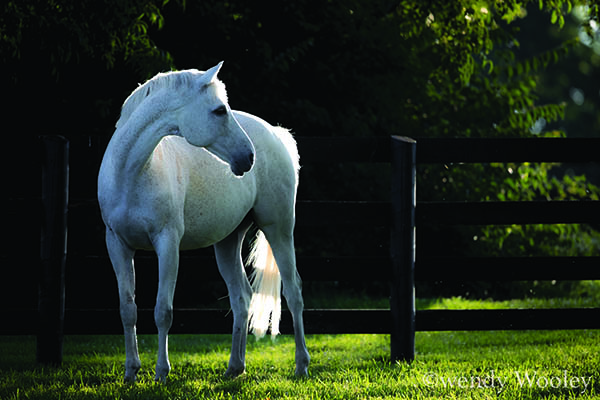 On assignment with photographer Lydia Williams for this column, I was at Frank Bonsal’s Mantua Farm in Glyndon, Md. The subject was Bonsal’s hard-knocking homebred stakes winner, Crosspatch (September 2009 edition of this magazine). After chatting about the gelding, Bonsal wanted to show off a pony in the barn who had been tearing up the local pony-racing circuit. I was about to leave when someone’s muzzle cozied up to my ear.

In the stall directly across the aisle from the superstar pony stood a striking gray horse. Beautiful head, bright eyes, kind expression. The kind of horse who doesn’t go unnoticed.

Bonsal’s farm manager, Lea Edmunds, said they hadn’t had him long. A former Scott Lake trainee, he came as part of a package deal with a mare recently purchased by Bonsal. At that point, the gelding didn’t even have a barn name, and there were no immediate plans for his future. Edmunds brought him outside at my request, and I told her the story of my friend in Michigan who had just lost her horse.

Then employed by the United States Golf Association, Wendy was at that time just up the road officiating at the U.S. Women’s Open in Bethlehem, Pa. I called her and suggested that she take a few hours and make the drive to Baltimore County to have a look at the horse. During the conversation, she shared that Palmer, her beloved 12-year-old Golden Retriever, had passed away a few days before she left for the tournament.

“Perhaps,” I told her, “this guy might brighten you up.”

“I really hadn’t wanted to look at any horses at that point,” Wendy said. “But I thought ‘At least someone’s looking out for me. Maybe this will be my horse.’ ”

It was. Within a few weeks, he arrived in Traverse City, Mich., to begin his second career as a dressage horse. 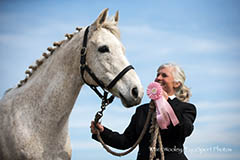 Enthusiastically researching his background, Wendy was delighted to learn that, like her, the horse was a Michigan-bred. Hola C Bright, whom she rechristened Ollie, was foaled on February 9, 2000, at the Grand Rapids farm of breeders Gene and Phyllis Gilmore. By Valiant Nature out of the Damascus mare Escallonia, he made 61 starts over seven seasons, recording a record 12-11-12 with multiple stakes placings and $157,633 earned.

His career took him to Great Lakes, Indiana Grand and Tampa Bay Downs before landing him on the Mid-Atlantic circuit at Monmouth, Delaware, Philadelphia Park, Pimlico and Laurel. He spent time in the barns of Peter Walder and Steven Krebs before ending up with Lake in April 2007. The gelding made his last start at Philadelphia Park in a $5,000 claiming race on June 1, 2008.

Wendy contacted the Gilmores shortly after Ollie arrived in Michigan, informing them that she had one of their homebreds.

“Maybe a month later I got this strange phone call from this guy who said we needed to meet at a pub literally two blocks from the house I lived in. He said, ‘You’ll want to meet me.’ He made it sound like some big mystery, but I ended up meeting him – Dr. John Sebright – and his wife Bonnie. Their next-door neighbors in Grand Rapids were Ollie’s breeders, and they had given him my letter. And Dr. Sebright said when he looked at my address it gave him goosebumps – I was living in his childhood home.”

The meeting also shed some light on the origins of Ollie’s rather unusual name. A plastic surgeon by profession, Sebright occasionally helped Gene Gilmore with night watch during foaling season. The pair used to practice their Spanish on each other, with Gilmore frequently uttering “Hola, Sebright” when greeting his neighbor.

“We just struggled with him,” Wendy said. “He’s a really nervous horse and I couldn’t get him to relax at anything.”

Discovering that stomach ulcers and intestinal issues were a factor, she shifted focus to his diet, eliminating sugar to the extent possible.

Quickly finding new trainer Emily Brollier, Wendy resumed the quest to get Ollie into the show ring. But still the nerves persisted. After one particular show at the Kentucky Horse Park, Ollie melted down to such a degree that it took a village to get him back on the trailer, followed by a month’s worth of ulcer medication to put him right afterwards.

“One day Emily said to me, ‘Wendy, I love this horse; he has such beautiful movement. But he’s like a hummingbird on crack.’ I decided it wasn’t worth trying to make him a show horse. Dressage just wasn’t gonna be his thing. He’s fancy though. You watch him out in the field, and he’s got some of the most beautiful moves. I sit there and go ‘Oooooohhh, if only I could take that into the arena…’ But he’s given me a lot, and we love this horse so much.”

When Wendy and Matt bought Seven Acre Farm two years ago (literally building their barn themselves), Ollie bumped into his third career. The Wooleys allow fellow Lexington-area photographers to use their property for bridal and special occasion photo shoots, and Ollie has become a highly sought-after model.

“Ollie is always up for that, and a white horse is what everybody wants. He’s perfect for the part and everybody loves him. What I love is hearing from all his connections. I think that’s so special. I love knowing about his previous life and what he meant to other people. Ollie is doing what he should be doing now. It’s all good, and we’re all happy.” 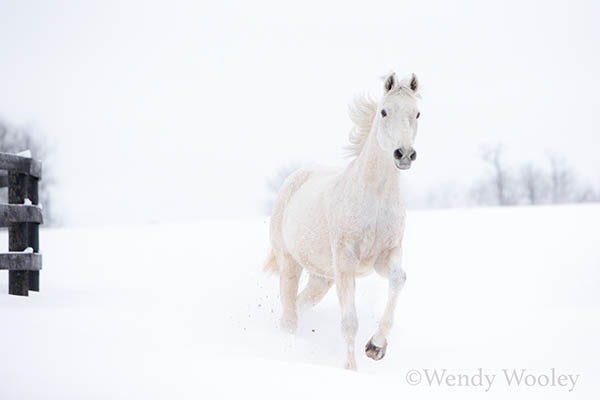