Barbara Luna has always considered herself “a reincarnated Southern belle.” So magnetic was the pull to head below the Mason-Dixon Line that Luna put down roots literally a few miles from where Generals Robert E. Lee and Ulysses S. Grant met and signed the documents which ended the Civil War in April 1865.

But in 2012, Luna decided it was time to give back to the horses who had enriched her life for so many years. She bought a historic property in Appomattox, Va., and hung out her shingle as War Horses at Rose Bower, a retirement program for Thoroughbreds (primarily geldings) no younger than 7 years old who made at least 50 starts. While the ultimate goal, in most cases, is rehoming, Luna has ended up with some permanent residents with recognizable names. 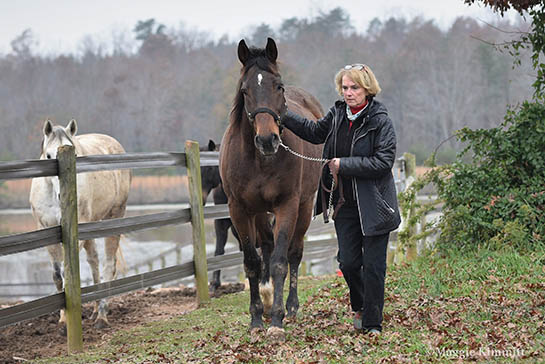 Her affiliation with Turning for Home brought Banjo Picker to Appomattox. Still solid, sound and handsome at 19, the big bay son of Swear by Dixie was bred in Pennsylvania by Betsy Houghton from her mare Sean’s Gold (by U. S. Flag). The bay gelding was a fixture on the Philadelphia Park circuit for seven seasons, beginning his career for the Houghton family’s Sylmar Farm and Betsy’s husband Ronnie. Banjo Picker made 12 starts in 15 months for those connections before trainer Steve Krebs dropped a claim slip on Aug. 21, 2004, acquiring him for owner Danny Limongelli for $15,000.

“We claimed him because he was a Pennsylvania-bred and the program here was so good. I never thought he would turn out to be what he did,” Krebs said.

Banjo Picker quickly proved to be quite the bargain, reeling off wins and triple-digit speed figures in sprints on the dirt – all the while also rewarding the Houghtons with breeder bonuses.

“I started to think we could win a little Pennsylvania stake with him, which we did when he won the Lyman Sprint Championship Handicap in [July] 2005. And then he just kept right on winning. He was by far the best horse I ever trained. He won stakes at 5, 6, 7 and 8.”

One undeniable component to the gelding’s success and longevity was jockey Tara Hemmings, then married to Krebs. The English native was on “Banjo” every morning and, from the time he walked into Krebs’ barn, no other jockey was ever aboard the horse when he ran. That’s 40 starts from Sept. 18, 2004, through Nov. 24, 2009.

“I will say one thing,” Krebs added. “Tara knew that horse better than anybody, even myself. She got on him every day…she really knew him.”

“He was my boy,” Hemmings said. “He was very laid back, kinda chilled out. Steve would bring his daughter in – she was just a child at the time – and she would ride Banjo around the barn. He’d be that cool. He knew the difference; he’s a smart horse. When I was on his back, he’d goof around. But when Steve’s daughter was on his back, he was an angel.”

The 2005 Gravesend Handicap-G3 at Aqueduct was the undeniable high water mark for Banjo Picker and his entire team.

“So there were no other races for him, and I nominated him to the Gravesend,” Krebs said. “The funny thing was, for those couple days before the race I kept staring and staring at the Form, and I said ‘Man, this horse actually looks like he has a chance in this race.’ And that was kinda surprising; it was a $100,000 Grade 3 in New York, you had Allen Jerkens in there. But I kept thinking he had a shot.”

Before Hemmings got a leg up in the paddock that afternoon, she had Banjo Picker spruced up like the prom king, giving him a fresh body clip and braiding his mane herself.

“I always did that when he ran,” she laughed.

They entered the gate at 47-1 with Presidentialaffair, Spooky Mulder, Acclimate, Saay Mi Name and Smokume also in the field. Banjo Picker led throughout, losing the lead briefly to Pioneer Empire at the sixteenth pole before battling back to win by a head, stopping the clock in 1:10.17. Their backers lit up as much as the toteboard, which read $96, $45.60, $21.40.

It was Hemmings’ first stakes win and the biggest victory of Krebs’ training career. They enjoyed four more years with the gelding before he retired in November 2009, taking with him a legion of fans and a record of 52-16-8-7 with earnings of $648,865.

Upon retirement, Krebs sent the horse to the Grantville, Pa., farm of a friend. But the empty stall in his Parx shedrow proved too much to bear, and after about a year Banjo returned – at Hemmings’ request – to function as their barn pony. He stayed with them until finally retiring to Luna’s farm in 2014. 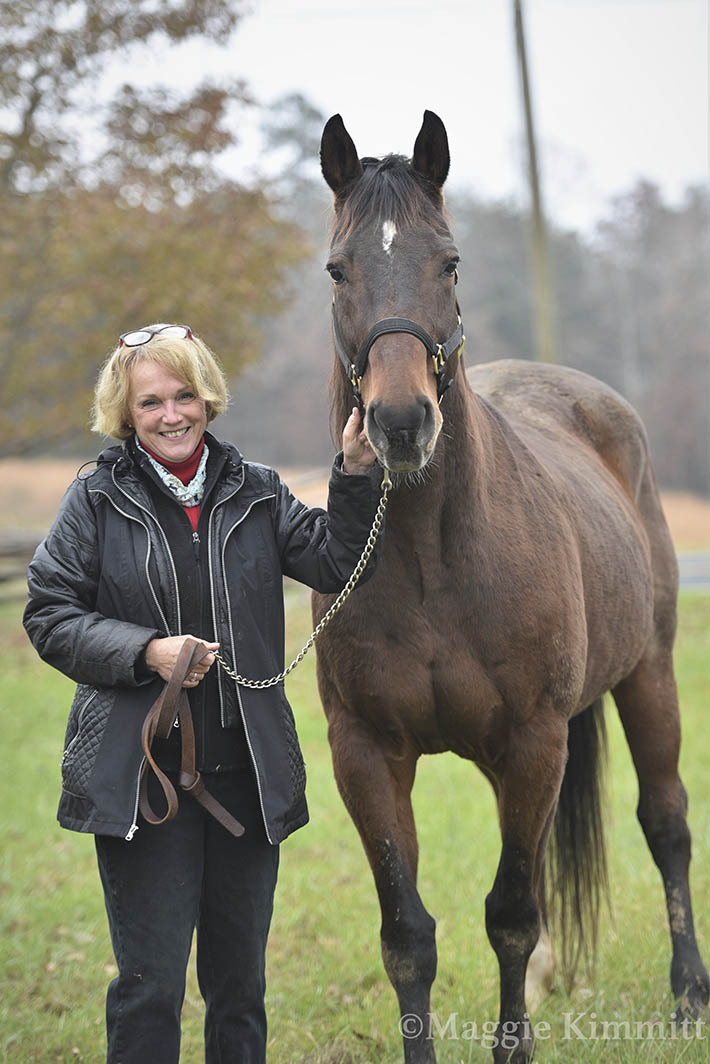 “He’s such a good-looking horse, so classy,” Luna said. “He knows his space, he doesn’t ever try to walk on top of you. He’s always so mannerly, just a doll about everything. I remembered seeing him on the track with Tara, the way she’d just sit on him for a while and let him stand there.”

“When I’d go to the track, I used to give him a tiny bit of grass just to make him quiet, and then I’d stand him for 20-30 minutes, and he would love that,” Hemmings said. “He was a big, muscled-out horse and everyone would ride by and say ‘It’s Banjo – Hey Banjo!’ You couldn’t miss him.”

Luna initially sent Banjo Picker for 30 days of professional training after he arrived in Virginia.

“He was trained as a trail horse,” she said, “and he was really good at it. But for some reason, he was never adopted. I still don’t really understand why. But he’s with me for good now, and I don’t mind.”

Krebs speaks with Luna regularly and receives steady updates and photos via text message. Hemmings made the trip down last year and spent a weekend visiting the horse who changed her life.

And he’s got a purpose.

“Last year we started with some therapeutic programs with these horses,” Luna said. “These old class horses have great attitudes. I’m hoping by the end of 2019 that we’ll have our first veterans’ program. The Thoroughbred Aftercare Alliance (TAA) was very generous with their grant money for me this year, so I want to at least have two veterans and two horses working together. The horses fulfill such a need for people.”

“I think about him all the time; he meant that much to me. He made all of us – everybody around him – better. The really good ones do that.” 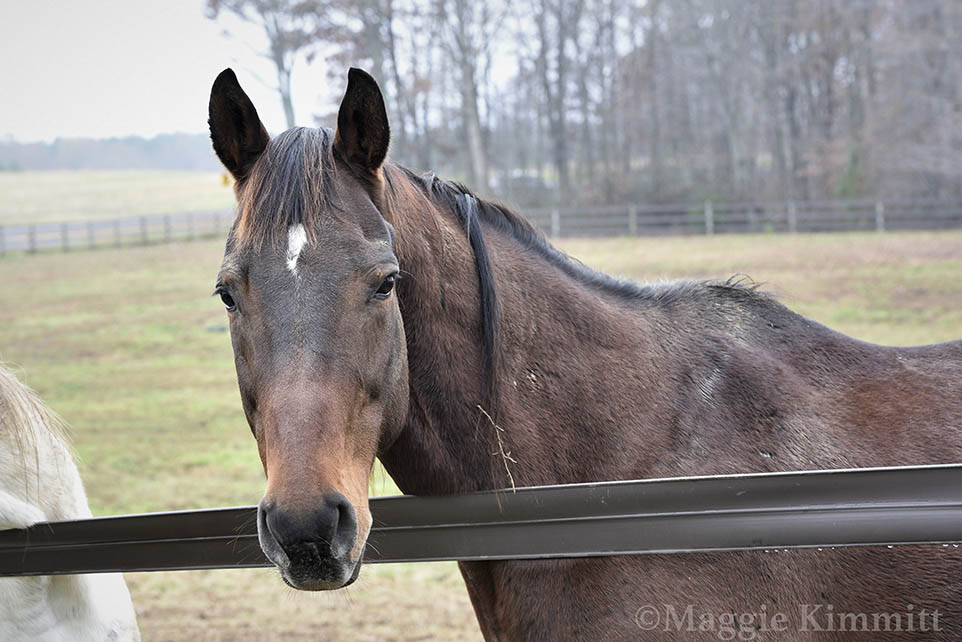