It was arguably the package deal of a lifetime. In 2007, breeder/owner Don Wilson agreed sight unseen to purchase a pregnant 6-year-old Smart Strike broodmare, the foal at her side and her yearling filly for $80,000 from Bob Bathen’s Bathen Thoroughbreds. Wilson was confident he knew all he needed to know about his new acquisition: she had The X Factor. 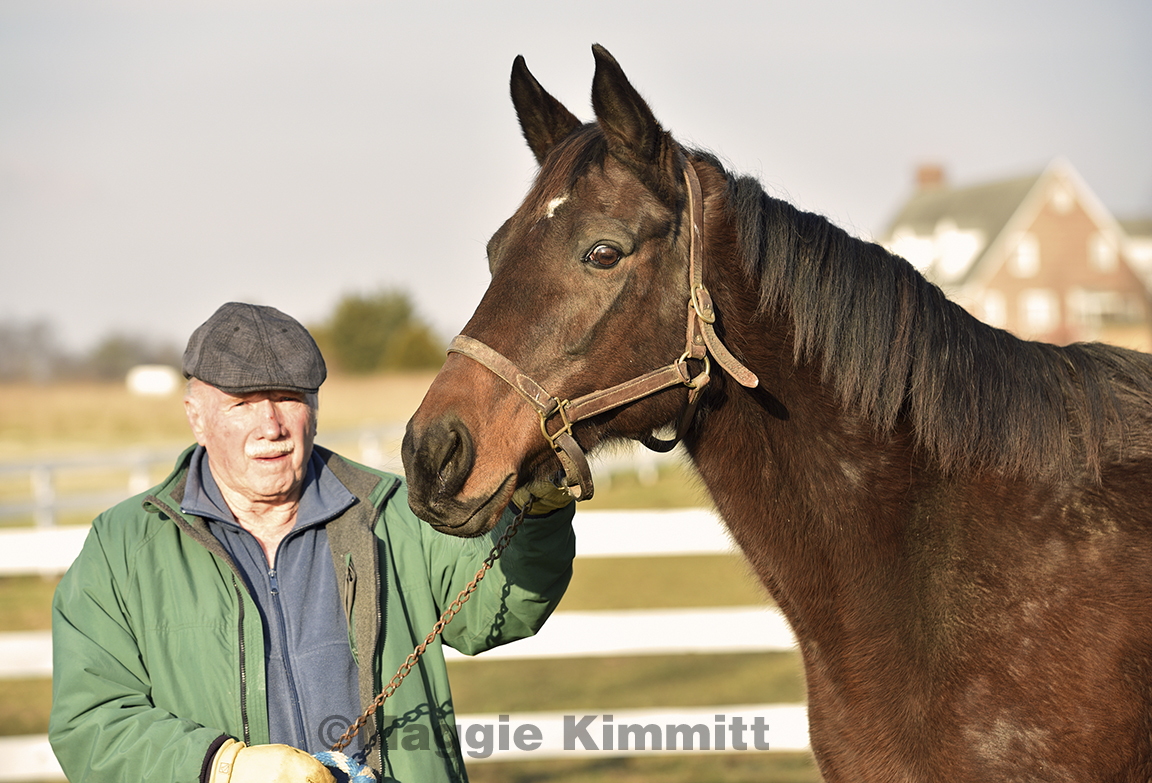 As was Bathen, Wilson was – and still is – an avid proponent of the research that supports the genetic link between large-heart size and the performance of the equine athlete. Through his enthusiasm for the theory, he became great friends with Marianna Haun, author of The X Factor: What It Is & How To Find It: The Relationship Between Inherited Heart Size and Racing Performance.

“Now I can almost pick out an X Factor horse just by looking at them,” Wilson said. “We don’t deviate from it; somebody in the breeding, primarily a mare, has to have the X Factor. You can breed that mare to a fast, speedy horse and you’ll end up getting something pretty darn good. There are people who say there is nothing to it, but it works for us.”

The mare, Free Strike, has indeed been pretty darn good to Wilson, his daughter Terri Amos and son Rick Wilson, who base their operation at Wilson’s 15-acre Windmare Thoroughbreds in Pylesville, Md. Led by multiple stakes placed Escrow Kid, earner of $561,749, Free Strike’s progeny have now amassed more than $1 million in earnings. And, one by one, they’ve made their way back to the family’s farm.

Bred in Kentucky by Sun Valley Farm from the Danzig mare Free City, Free Strike had a modest career on the racetrack, winning once in 16 starts and earning $12,076. She was the centerpiece in the grouping sold to Wilson which included Dancing Feet, her yearling by Dance Master; Escrow Kid, then a weanling, by City Place; and a foal in utero to the cover of Pure Prize. Wilson settled his new acquisitions on the Pennsylvania farm he owned with his brother at the time, where Free Strike delivered a filly named Pure Strike on May 18, 2008.

With his Thoroughbred holdings increasing, Wilson needed to make a decision about breaking and training. His friend Jodi Pointer knew a young couple, Carl Doran and his wife Megan Wicks Doran, just getting their business off the ground. Pointer recommended that Megan reach out to Wilson.

“Don was the first phone call I made to try to hustle business to my breaking farm in Churchville [Md.],” Megan said. “That is where Don and Carl met, and Carl has been their trainer ever since.”

Raised not far from The Curragh racecourse in the Dublin suburb of Tallaght, Doran rode races in Ireland before being coaxed to the United States by his best friend Mark O’Dwyer, now an assistant to trainer Tom Morley. After spending time in Florida, Doran headed to Maryland, working at Delaware Park in the mornings and holding down a farm job in the afternoons. It was there that he met Megan.

“Megan broke Dancing Feet, Free Strike’s first foal,” Wilson said. “And then we sent her to Clyde Martin at Delaware. Nothing good happened with her [she never hit the board in two career starts], but she caught the attention of some Quarter Horse people who took her out to Montana and bred her to one of the best stallions in the world. And she had a heck of a baby by that stallion. Now actually we are getting her back after all this time. She’s bred to Jersey Town so that foal is coming in 2019.”

Free Strike’s second foal, Escrow Kid, was the game changer for all his connections.

“Carl was working for Chuck Lawrence and just had one horse of his own at that time,” Wilson said. “He asked what I was going to do with Escrow, whom Megan was breaking. I said ‘I’m gonna give him to you.’ We were learning and they were learning at the same time. Carl started training him, and he just started winning money and kept it up.”

Escrow Kid was a tank, running 14 times as a 3-year-old in 2010, including a start in the Jaipur Stakes-G3 at Belmont Park and Saratoga’s Latham Stakes three weeks later. He was back at Saratoga the following year in one of his 10 starts at 4, finishing sixth in the Forego Stakes-G1 won by Jackson Bend. Crossing the wire behind him that day were graded stakes winners Regal Ransom and Sidney’s Candy. On it went for seven seasons, from 2010 until 2016. Between seven and 14 starts each year with at least one win and multiple triple-digit speed figures. Claimed from Wilson at Saratoga in 2012 by Tony Dutrow for Michael Dubb, Escrow Kid made the rounds on the New York circuit before he ended up back in Doran’s barn for owner Robert Atkinson in October 2013.

But the ping-pong tournament wasn’t over yet for Escrow Kid. Hugh McMahon took him for $25,000 at Laurel in December 2014. Eight months later, McMahon dropped him in for $7,500 at Laurel, and Wayne Potts claimed the horse. In November 2015, McMahon claimed him back for $5,000 at Laurel. Jennie Wilhelm-Saldana haltered him for $5,000 three months later. Juan Vazquez took the 9-year-old gelding for $7,500 at Parx in March 2016.

Escrow Kid spent some downtime at Megan’s farm before settling into retirement at Windmare Thoroughbreds where he shares the barn with his dam and half-sister Pure Strike, now 11. The earner of $152,209, Pure Strike is in foal to Friesan Fire for 2019, as is Free Strike.

The Dorans have started all of Free Strike’s offspring. D T Goodie, a 6-year-old Jump Start gelding, was still in training with Michael Catalano at the end of 2018 and has earned more than $200,000. His full-sister Justa Scoch, now 5, is with the Dorans and has four wins and $136,716. Next will come Grace N Favor, a 2-year-old filly by Friesan Fire.

“Friesan Fire,” Don Wilson declared, “is going to be the next big sire.”

“Free Strike and her offspring really gave my career a jump start right off the bat,” Doran said. “I was very fortunate that Don gave me a chance to train Escrow Kid. Over the years, my relationship with Don has grown, although he always treated Megan and I like family, he has really become more of a second father figure for me which has been very special as my family lives in Ireland. The whole family has contributed to my success as a trainer and my life in Maryland.”

And while Don Wilson scoffed in amusement at the suggestion that he’s created a bit of a dynasty – both with his own offspring and Free Strike’s – Megan Doran is a believer.

“When we began working together, Don was the entire show,” she said. “He has brought in Rick and Terri, who have really raised the bar going from adult children who enjoyed their dad’s hobby to in-the-trenches horsemen. Learning horsemanship skills on young Thoroughbreds is a daunting task. It’s incredible; they went from standing outside the stall looking in to grooming, bathing, pulling manes, holding for the farrier and even foaling mares. The fact that Rick and Terri have pursued this as adults and not crazy young kids has been very impressive.”