Details
From May 2019 Issue
Written by Maggie Kimmitt

“You’re about to spend the next 15 minutes watching me try to catch this horse.” On cue, the dark bay mare lifted her head from the grass and walked off, a slightly miffed dowager duchess. Calm but determined, she kept what seemed a calculated distance between herself and the man with the halter and shank. He moved, she moved. 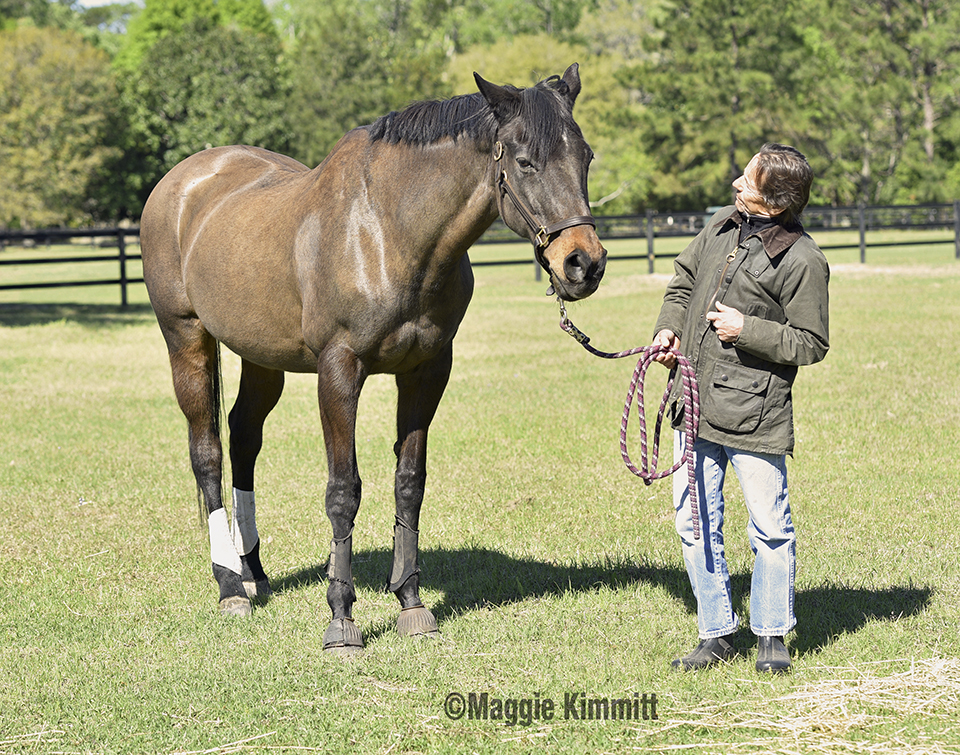 Crandall, the mare, couldn’t have cared less that the man was the last jockey to ride Secretariat. It didn’t matter to her that he was inducted into Thoroughbred racing’s Hall of Fame in 2009. When she decided she was ready to be caught – and not a moment before – Crandall stood and allowed a now-smiling Eddie Maple to slip on her halter.

Maple is accustomed to the ballet. Now 29, Crandall was bred in Kentucky by Maple’s wife, Kate, and fellow jockey Craig Perret – a daughter of Bet Twice and the Elocutionist mare Clamoring. Perret and Bet Twice were frequent headliners in 1987, primarily due to a rivalry with Chris McCarron and Alysheba. Bet Twice finished second to Alysheba in the Kentucky Derby and Preakness, but Bet Twice captured the Belmont Stakes and the Haskell Invitational.

Running in Lucy Close’s name, Crandall began her racing career as a 3-year-old at Belmont in May 1993 for trainer Evan Jackson with Eddie Maple in the irons. Her connections were patient. Transferred to the barn of Susan Duncan that July, Crandall finally broke her maiden courtesy of a disqualification in her 11th start, a $35,000 claiming race at Aqueduct Dec. 5, 1993. She was ridden again that day by Maple, aboard for 20 of her 24 lifetime starts.

Covering distances from 6 to 81⁄2 furlongs on dirt and turf, Crandall raced at Aqueduct, Belmont and Saratoga, and once each at Meadowlands and Fair Grounds, before making her final start May 29, 1995. She had actually been retired at the end of 1994 and sent to Kentucky to become a broodmare, but Crandall had other ideas.“She was sent to Gary Lavin’s farm in Kentucky to be bred, because her mother had produced a stakes winner [Millers Stationery, by Quadratic],” Kate Maple said. “She hated it; she just walked the fence and lost a lot of weight. It was agreed that she wasn’t going to be happy being a mother.”

Crandall returned to Duncan’s barn, making three starts in 1995 – the first an allowance at Fair Grounds where she finished ninth. Back at Belmont Park two months later, she turned in similar lackluster performances in her next two starts. Scheduled to run again, she suffered a bout of tremors and shaking the morning of the race, prompting her connections to call it a career. She took with her statistics of 24-2-5-2 and $53,540 earned.

“That’s when she became my pleasure horse,” Kate said. “She was at a crossroads. My husband allowed me to have her, and you should have seen me begging. I had always said in front of my sons, ‘Oh, I wish I could ride again.’ It had been like 30 years. They said, ‘Oh Mom, please, if you wanted to ride, you would be riding.’ ”

Raised in New Jersey horse country, the former Kathryn Miller rode as a child, getting her first off-the-track Thoroughbred at age 13.“He was a 3-year-old who proceeded to run away with me every single day. I showed him and hunted him, until he ran past the master of the hunt one day. I didn’t know the difference.”

After graduating college, Kate was prodded by her friend Andrea King to come to Monmouth Park to gallop racehorses for the summer. She met her husband – whom she calls “Maple” – while riding out for trainer Jimmy Croll.

“Jimmy Croll was a saint. He put up with me,” she said. “He tried to explain to me how to use a cross [in the reins] so the horses wouldn’t run away. And I just thought ‘OK, yeah right, I’m gonna do that’ . . . ’cause I was so smart.”Crandall retired to the Maples’ home base on Long Island but traveled to Saratoga in the summer and Florida in the winter. Kate had a friend, Pam Levine, who brought her horse down each year as well.

“I’m not sure but I do think he was a Thoroughbred,” she said. “He was a nice, nice stallion and Crandall loved him. She would do anything to follow Czar. She went over metal bridges; we went by the zoo in Homestead; it’s different in Florida when you go on trails. You go through parking lots, across bridges. It’s not like up north, but she’d go anyplace to follow him.”

Twelve years ago, Eddie and Kate were set to purchase a farm in Bluffton, S.C. “Devastated” when the deal fell through, they followed a suggestion to look at Rose Hill Plantation, a gated community of nearly 1,000 homes just north of Hilton Head Island offering golf, tennis and an upscale 50-acre equestrian center.
“We looked at it, thought it would be nice for Crandall and our dogs, so we bought the house. The guy who was supposed to be running the barn was having a little trouble getting the lease. He thought it might help if he put Maple’s name down. Maple said OK, and next thing you know, the guy got the lease and then he backed out.”

So much for retirement. Eddie and Kate, as Equine Management LLC, now run Rose Hill Plantation Equestrian Center, offering public boarding services. And Crandall is queen of all she surveys. Turned out daily in a private paddock, she’s outfitted with protective neoprene splint boots all around and bell boots on her front feet. She’s brought back into her stall whenever she lets it be known that she’s had enough of the great outdoors – most especially when the low country gnats and bugs start biting.

“She doesn’t put up with much,” Kate said. “She’ll walk past the geldings and bare her teeth. But I always go back to how she has taken care of me for so long, and at times it was really necessary.”

During a recent trim of Crandall’s feet, the Maples’ farrier reminded Kate that working on the mare isn’t exactly the highlight of his day.

“He actually said, ‘She’s a roaring bitch.’ And I said, ‘I know. . . I know.’ But I still hang birthday cards and a little crown on her stall door every year. She’s spoiled, ya know.” 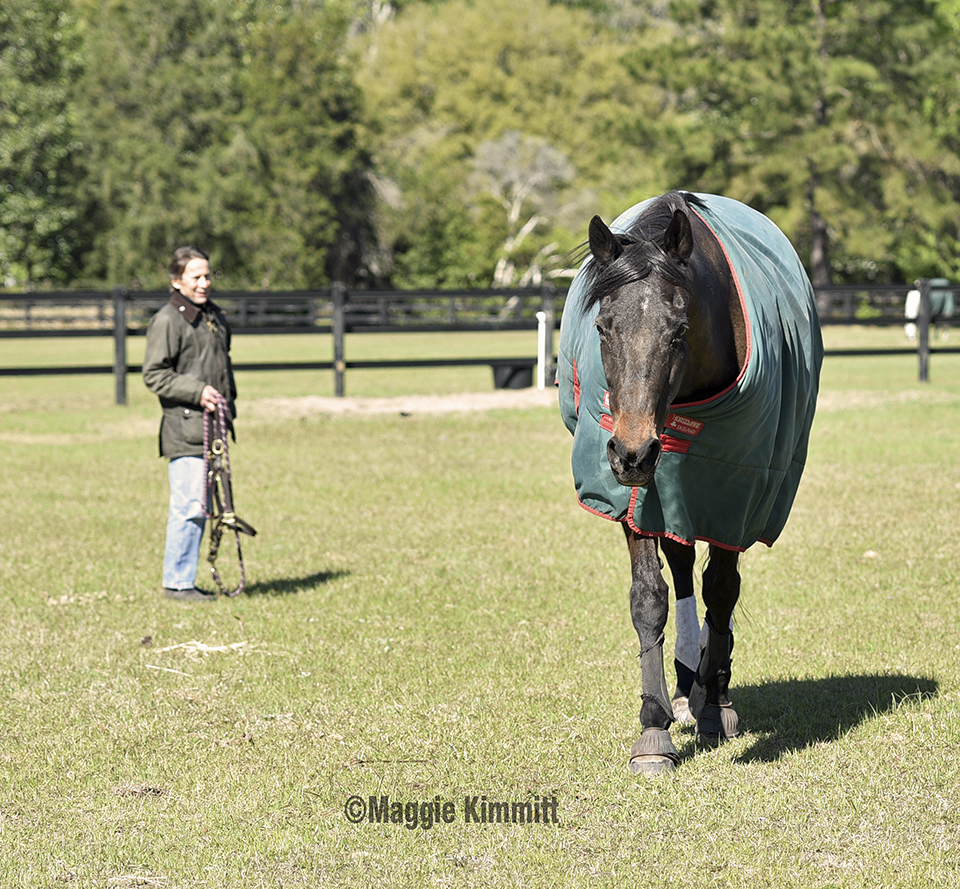