Spend just a few hours with Michelle Rosenkilde at her Monkton, Md., farm, and you’ll leave hoping you’ll end up reincarnated as one of her horses. Michelle and her husband, Jeff, have created a home for every living thing, be they human, canine, feline or equine. It’s a life that 24-year-old bay gelding Reese has shared with the Rosenkildes for the past 17 years. And given his laundry list of isms and peculiarities, he’s beyond lucky to have made such a soft landing. 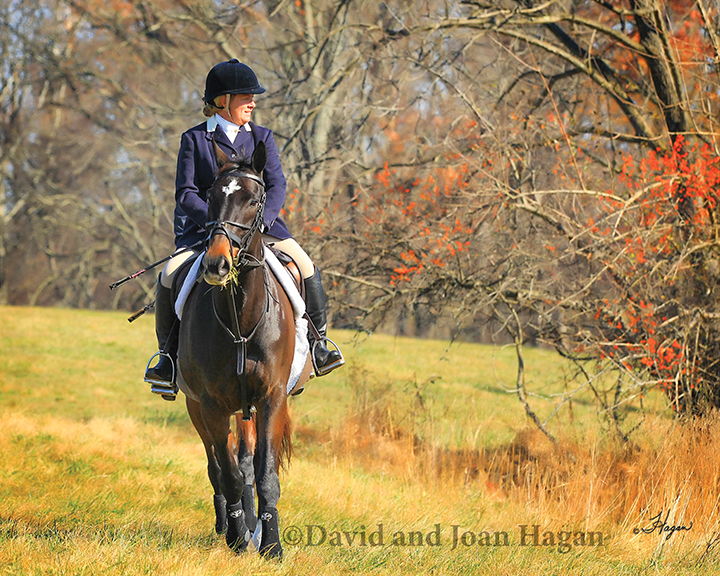 Reese was bred in Maryland by Henry S. Clark and Henry S. Clark III, with the latter also owning and training him. By Poles Apart out of the Oh Say mare Green Spring, Reese’s entire racing career spanned nine winless starts as a 4-year-old in 1999, five at Laurel Park and four at Pimlico Race Course. He hit the board just twice, with his best effort a second in his final start. His career earnings were a modest $6,305.

Those were inconsequential details to Rosenkilde when she met Reese three years after that racing career ended.

“My friend Tasha McKnight told me about him; her friend Kelly [Kees] Magee had him. They sent me a picture, and he was really gorgeous. Kelly said she had wanted to make him a show horse because he’s a really pretty mover, but she just didn’t have time for him.”

Rosenkilde brought him home without even sitting on him first – not an unusual practice for her.

“I thought ‘Well, I could use a horse for Jeff.’ So I went down to get him and oh my God – I put him on the trailer and he pawed and hooted and moved back and forth the whole time. He’s like a scaredy-cat. He carries on all the time, and it’s like everything goes wrong for him. I got him home just relieved he hadn’t hurt himself.”

Michelle and Jeff have informally crafted a joy-filled base camp of sorts for fledgling and veteran riders who love to foxhunt. She always has an ear and eye open for a potential mount and usually keeps six to eight horses in rotation and ready to hunt at any given time.

Jeff hunted Reese once, with a “thanks but no thanks” end result.

“Jeff did an unbelievable job,” Michelle said. “But I need my husband alive.”

Michelle enlisted the help of a few professionals for more training. All offered the same advice: “You should get rid of this horse.”

Despite Reese’s personality, Michelle soldiered on. He was miserable to deal with, biting just about everyone within reach, and was definitely low man on the totem pole among the herd, rarely without a bump, nick, scrape – occasionally worse – from his pasture mates.

In Reese, Michelle had finally found the one creature on the planet who matches her profound passion for foxhunting.

Neighbor Jenn Seidl began riding with the Rosenkildes as a young girl about 15 years ago, helping to keep the hunters in shape. When Reese first came into the fold, Seidl would ride her bike to the farm from her home just up the road.

“The big joke was that if she got down the hill to my house and Reese wasn’t in the field, she would turn around, go home and say ‘Miss Michelle, my father said I have to blah blah blah . . .’ She didn’t want to ride him because he was so ornery,” Michelle laughed.

A few years ago, Jenn brought Reese in from the field with a nasty gash on his head. The wound required stitches and four weeks of rest. On the day he was to resume activity, Jenn tacked him up, led him to the mounting block and he froze.

“As soon as she turned the stirrup, he looked like he was about to rear up, go backwards or fall down,” Michelle said. “It was awful. He’d gotten clunked in the head, so we figured something’s wrong. So I told Jenn not to get on him, and I was at my wit’s end. I’m the assistant hunt secretary for Elkridge-Harford Hounds, so I called Joe Davies [trainer of three-time Maryland Hunt Cup winner Senior Senator]. I told him what was going on, and he said he’d come over as soon as he had a chance.”

“I see them get out of the car and I’m thinking ‘The Hunt Cup winner . . . oh my God. Reese is gonna kill him and everybody in town’s gonna hate me.’ ”

Davies legged up Poretz. They hacked a bit, popped over a jump, mounted, dismounted, untacked, retacked, and mounted again. Within the span of 10 minutes, Reese was re-wired and back in business.

Over the years, Michelle has worked out a myriad of issues with the gelding. She discovered that Reese hated flatwork under saddle . . . but he loves being ponied. Reese is now ponied alongside another horse. Since he was constantly picked on by other horses, the Rosenkildes built him a run-in shed with a stall, and he is now turned out with just one other horse. As he prefers to be fed outside, the new shed gave him a quiet place to have his meals in peace.

“He’s sassy. He’s a very hard keeper. He’s quirky. He’s herd-bound,” Michelle said. “But when you are hunting, there is no better horse. He’s so smart, just the coolest thing. One time we were galloping along on the best run, and he completely came to a dead stop and held his front foot up. I was panicking. My friend Stacie Eggleton was with me, and she jumped off her horse and ran over and grabbed Reese’s leg. She said, ‘There’s a corncob in his frog.’ And I mean it was IN there. So she pulled it out, jumped up on her horse and off we went.”

Other than Michelle, one of the few riders to hunt Reese was a teenage girl named Emily Bosley.

“All she wanted to do her whole life was ride and hunt,” Michelle said. “So we got her all outfitted, and you should see the pictures of her on Reese. She was beyond excited.”

On the night before the 2007 Maryland Hunt Cup, 17-year-old Emily was killed in an auto accident. Everyone at the Rosenkildes’ barn was devastated. Then came a phone call with a poignant, special request from Emily’s mother.

“I have to ask a great favor,” she told Michelle. “She so loved you and she loved Reese . . . and he has to be at the funeral.”

Michelle and Jeff agreed, took Reese and another horse Houston to the cemetery in Bel Air.

“There were all these people and kids and cars at that cemetery and she wanted [the horses] right up there in the middle of it all where the chairs were,” said Michelle. “Emily loved Reese and Houston. And they both stood there the whole time; they never moved. It was like they knew.”

The old boy shows no signs of slowing down. Michelle vows to continue hunting Reese until he tells her the time has come to throw the tack on one of the seven other “Reese replacements” she has waiting to fill his formidable shoes. They have their work cut out for them.

“This horse has taken such good care of me for all these years. We know each other so well that I don’t even have to think. Did I tell you I adore him? He’s just the coolest thing.”