Typically speaking, Edge of Reality doesn’t embody the term “pensioner.” He’s not an equine senior living out his twilight days. He’s not creaky or cranky. He doesn’t require special dietary needs or maintenance. But although he’s just 9 years old, Edge of Reality does epitomize the concept of a responsible breeder/owner providing a former runner with the best possible retirement. 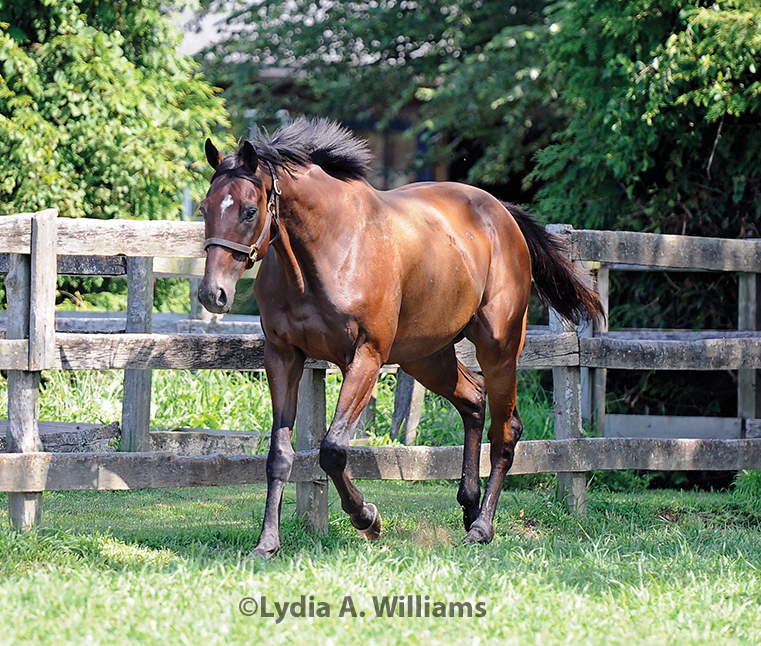 As a colorbearer for Stuart Grant’s The Elkstone Group, he began his career with solid expectations. A son of the highly regarded but ill-fated young stallion Lawyer Ron, Edge of Reality was produced from the Touch Gold mare Our Nancy Lee in Pennsylvania March 5, 2010.

A 3-year-old in 2006, Lawyer Ron won three major preps in Arkansas before finishing 12th behind Barbaro in the Kentucky Derby-G1, and came back a powerhouse for his 4-year-old campaign with Grade 1 victories in the Whitney Handicap and Woodward Stakes and was beaten a neck by eventual Horse of the Year Curlin in the Jockey Club Gold Cup-G1. It was enough to earn him the Eclipse Award as champion older horse.

Lawyer Ron retired after the 2007 season with $2,790,008 to his credit. He headed to Stonewall Farm in Versailles, Ky., to begin his stud career. Fate dealt his connections a cruel hand when the young stallion was euthanized due to complications from colic surgery in July 2009.

Unraced as a 2-year-old, Edge of Reality showed promise literally from the start, winning his first effort at Parx for trainer Tony Dutrow in January 2013. Dutrow kept the colt busy that season and was rewarded with a graded stakes win in September when Edge of Reality took the Smarty Jones-G3 at Parx. It wasn’t at all far-fetched for Grant to consider Edge of Reality a potential Mid-Atlantic-based stallion prospect.

The horse began his 4-year-old season in the barn of Graham Motion, winning Presque Isle Downs’ Leematt Stakes in his second start for his new trainer. The colt followed up with a score in the Alphabet Soup Handicap at Parx two months later and he was sent to California for a winter campaign in early 2015, where he failed to hit the board in graded stakes company. He found his way back to the winner’s circle when he returned to Parx that June in the Turning For Home Stakes. It would be another year before Edge of Reality – by then a 6-year-old gelding – crossed the wire first, in Penn National’s Robellino Stakes.

Grant made a change in 2017, sending Edge of Reality to the New York barn of Tom Morley. The trainer revisited several of the Pennsylvania stakes races that Motion had utilized, and the horse ran well enough to hit the board. When Morley moved his string to Fair Grounds in New Orleans late that year, Edge of Reality went along. But in his first start there, a serious right hind suspensory injury proved career-ending.

After 41 starts with a record of 8-4-3 and $713,351 earned, Edge of Reality was shipped to Grant’s C-Dog Farm in Chesapeake City, Md. While Grant purchased the 97-acre property specifically to foal Maryland-breds, it also offers the perfect situation for his homebred retirees.

Farm manager Bobby Goodyear and foreman Michelle Walker have cared for the bay gelding since his arrival just under two years ago.

“Any other horse probably wouldn’t have made it, but he knew how to protect himself,” Goodyear said. “And he’s just been class ever since then. It was about a year before he got turned out completely. We tried some different things with him – stall rest, round pen, hand walking.”

“He was in the stall for about four months, just being bandaged. And he was perfect,” Walker added. “He had a Jolly Ball, and it was like ‘I’m going to stand in the stall for a few months? OK.’ He was so easy on himself. In all my years with horses, I’ve never had one that knew he had to take care of himself that way. He’s so chill and was the perfect layup.”

When “Edge” was finally deemed healthy enough to begin full turnout, he was introduced to pasture mates (and fellow homebreds) Harker, a 7-year-old gelding by Rockport Harbor out of the Boca Rio mare Ms. C D Player, and Winoneforthezipper, a 10-year-old Cherokee Run gelding out of the Pulpit mare Pulpit Fiction.

“The first day we turned him out with Harker, just the two of them to see how they’d do,” Walker said. “He hadn’t been turned out in a big field before. Within five minutes – and they’d never been together – their heads were together eating the same blade of grass, and it’s been that way ever since. They eat out of the same bowl in the morning. He lives outside 24/7 with Harker and ‘Zipper.’ They are fed outside, and he loves life. He just enjoys being outside. They do well out there, have their big shed, and they only come in for routine maintenance.”

While there are no plans for Edge of Reality to embark on a second career, the option is always on the table.

“We’re not saying he won’t,” Goodyear said, “but there’s nothing planned so far. One of Stuart’s horses, Evolution Rocks, is at the University of Delaware now. They needed a horse for their program to teach students how to groom and things, so he’s over there getting pampered. Zipper went off and evented for a while, and then the girl couldn’t keep him anymore. And if people can’t keep them, they come back here. Always.”