She looks like the live-action version of every Black Beauty illustration we saw as children. That midnight-in-the-middle-of-nowhere shade of coal with a perfect white star on her forehead. 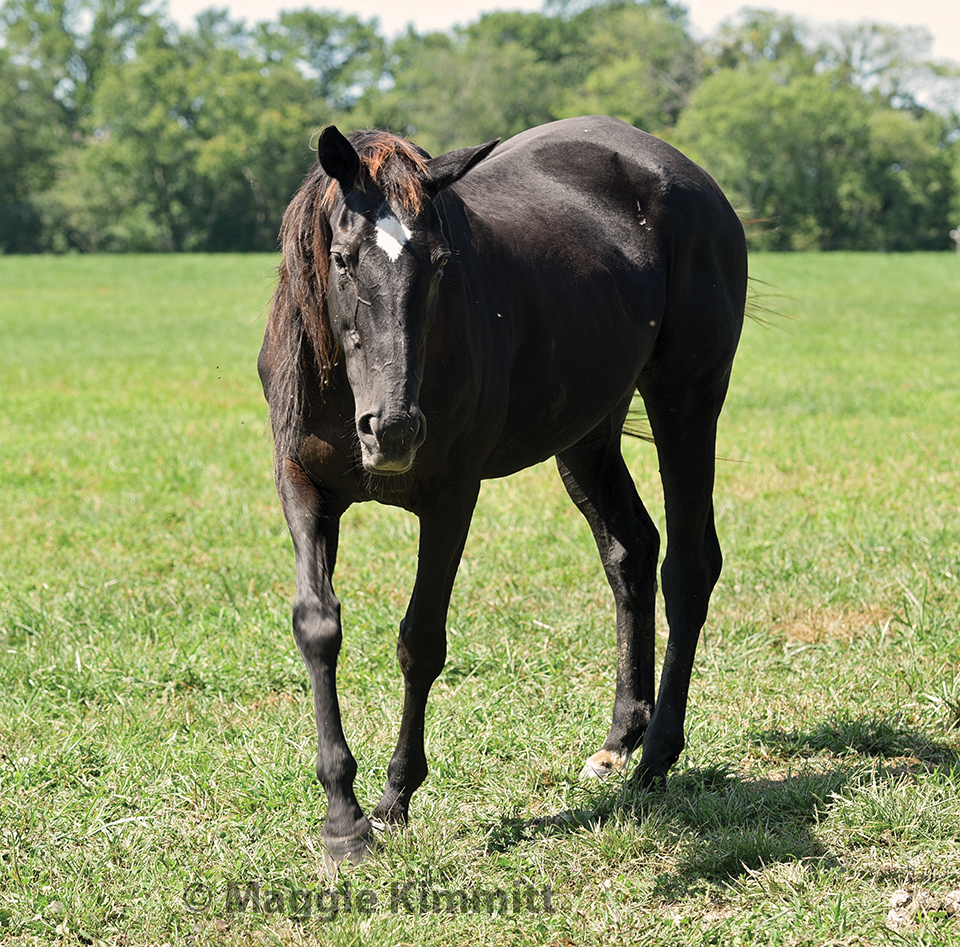 “She looks exactly like her mother,” Amy Hopkins Daney said of 23-year-old Londonderry, a homebred for the Hopkins family’s historic Elberton Hill Farm in Darlington, Md. Daney and her three siblings were raised on the property that had been in her father’s family since the 1600s. In truth, Daney’s own story would make delicious reading for any horse-mad adolescent girl.

When the late Carroll Francis “Frank” Hopkins Sr. and his wife, the former Martha Dugan, relocated their brood to Harford County, it was with an eye toward fresh air, green spaces and swimming pools – not horses. Through church membership, Frank and Martha befriended the Pons family of Country Life Farm in nearby Bel Air, Md., and the purchase of one broodmare spawned a classic Maryland Thoroughbred nursery.

During its heyday more than 40 years ago, Elberton Hill Farm stood 13 stallions during a breeding season. Amy Daney can still tell tales of every one, all the way back to flagship stallion Beau Priam, who arrived in 1970.
“It was crazy busy,” Daney reminisced. “Those were good days. We’d keep over 100 horses here year-round.”

In 1991, the owner of 9-year-old broodmare Arunji (T. Brooke—Irish Banshee, by Irish Castle) sent her to be bred to Elberton Hill’s stallion Perfecting, a stylish, graded stakes-winning son of Triple Crown champion Affirmed.

“I remember coming home from college, and there was this beautiful black mare out in the field – she really was black – with a white star,” Daney said. “I thought she was gorgeous. They were breeding her to Perfecting. Subsequently the following year the owner couldn’t pay his bill, so we ended up with Arunji for that board bill.”

A solid allowance performer in New York, Arunji won five of 49 starts and earned $221,665. From that date with Perfecting, she rewarded Frank Hopkins with 1997 Maryland Million Sprint Handicap winner Aberfoyle. For a Maryland breeder, only a Preakness victory could match the brilliant sheen of a Maryland Million win.

Bred back to Perfecting in 1995, Arunji gave birth to her doppelganger when Londonderry was foaled at Elberton Hill on April 26, 1996. Daney remembers an obstinate filly who led the farm crew on a merry chase.

“She was quite the handful as a baby,” Daney said. “I remember when she was a weanling, we always had trouble catching her. One night I got out there, and she was just throwing a fit. And I said, ‘We’re not going to give up until we get this corrected.’ We went all in for about 30 minutes. She’s one of those horses that, if you pick a battle, you better win it. Because if you give up, she’ll never forget. And when it came time to break her, she was just as bad.”

Bearing the Hopkins’ black and yellow silks, Londonderry ran for three seasons, earned $74,275 with a record of 30-3-4-5 and finished third in the 2000 Maryland Million Distaff Starter Handicap. But it was back on the farm, as a broodmare, that she proved her worth. Of her eight foals – all of whom raced – seven were winners, with two successful on the steeplechase circuit.

Foyle (by Yarrow Brae) won the International Gold Cup and Pennsylvania Hunt Cup over timber for Merriefield Farm and trainer Bruce Fenwick in 2013 and was named that year’s Maryland-bred champion steeplechaser. Puller (by Lion Hearted) was sold to Charles C. Fenwick Jr., who still owns and foxhunts the 11-year-old gelding. Trained by Todd Wyatt, Puller was second in the New Jersey Hunt Cup and third in the National Sporting Library and Museum Cup in 2016.

“It was really through my father that we decided to do that. During World War II, not many people realized that we had United States Marines stationed in Londonderry, Northern Ireland. They were there, I believe, primarily to guard the harbor from the Nazis because it was the last land between the U.S. and Europe.

“My father, Col. James Dugan, was there from May 1942 through August 1944. He was very well loved over there and did a lot for the Irish people during the war – built housing, helped with orphanages, started a boxing league. In 2002, the people of Derry invited me and my family to come over for a 60-year anniversary party, and, I’m telling you, that was one of the highlights of my life. He even began a bagpipe band within the Marines! The Lord Mayor had told him that was one thing the Americans did not have, so they got all the musicians together and started it. And they still have one; they play in Navy parades and things like that, and that was all thanks to him.”

Aberfoyle Castle was the name of Col. Dugan’s home while stationed in Ireland, and the River Foyle flows through Derry. Puller is named for Virginia native Lewis Burwell “Chesty” Puller, a close friend of Col. Dugan. A lieutenant general who served with distinction in World War II and the Korean War, Puller was one of the most decorated Marines of all time, earning an unprecedented five Navy Crosses for valor in combat.

It’s been an appropriate familial reference for Londonderry. Retired from breeding after producing her last foal in 2010, she’s still the undisputed alpha mare at Elberton Hill. She lives full-time in one of the farm’s massive fields with another of the Hopkins family’s best runners, 2001 Maryland Million Turf Stakes winner Elberton. Also by Perfecting, the 22-year-old now-white gelding was featured in this column in March 2013.

Currently sharing the field with these two retirees are three mares who represent the next phase of Elberton Hill.

“We weren’t really into anything for a while. We had stopped breeding,” Daney said. “So two years ago my husband Mike and I decided we wanted to get a couple mares and try the commercial route, so we went up to Saratoga. We were driving up and were on the phone with Murmur Farm’s Audrey Murray; she was just getting Blofeld and selling shares in him. So we bought the share over the phone, and when we got to Saratoga we thought well, Audrey’s got that stallion . . . why don’t we just get two mares? And we ended up with three.”

During the past few months, Daney has observed a new development. Rather than spending her time shoulder to shoulder with Elberton, Londonderry is bonding with 2017 acquisition Preying Mantis, a 6-year-old daughter of Medaglia d’Oro.

“Now if you go over there, Elberton is kind of in the back overseeing everybody, and it’s those two together,” Daney said. “I like to just watch what’s going on within the herd. So it’s interesting to see these two mares interacting, and it’s like Londonderry is saying, ‘All right, you’re going to be in charge.’ It’s almost like the baton is being passed.”