The chart footnotes from the eighth race at Penn National on Nov. 3, 2004, stated that Fort, running for a $2,500 claiming tag, “showed speed three wide to the stretch then tired.” In the absence of further knowledge, the average racing fan could venture a guess at what came next for the 5-year-old dark bay gelding. 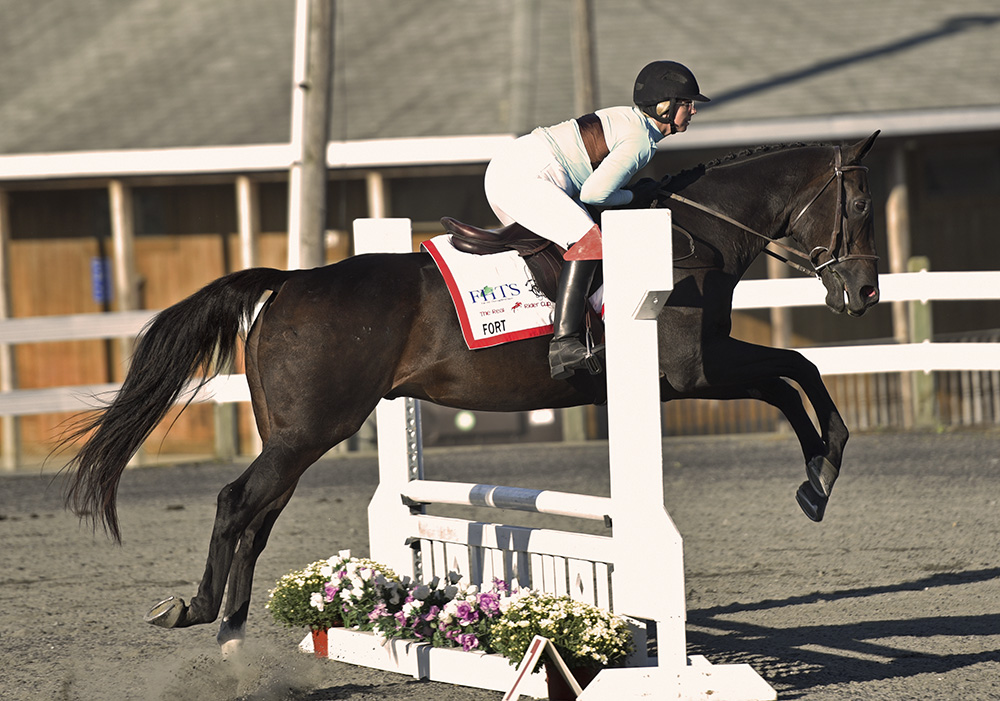 Bred in Kentucky by Bob Hindman, Fort was sired by Canyon Creek (Ire) and produced from the Fort Prevel mare Grassy Meadows on April 13, 1999. Nebraska-bred Grassy Meadows earned her stripes – and her $152,444 – the hard way, making 104 starts over eight seasons with 19 wins. On paper, Sheikh Mohammed’s homebred Canyon Creek had the necessary street cred. He was sired by Mr. Prospector and out of the multiple graded stakes winning mare River Memories, by Riverman. But his career spanned only three starts in England and France for trainer John Gosden with two wins and earnings of $24,490.

That’s the pedigree angle, anyway. The rest is about more than bloodlines.

Fifteen years after his last start, 20-year-old Fort was one of 25 horses chosen to compete in the third annual Real Rider Cup, a charity fundraiser for Thoroughbred aftercare at Fair Hill, Md., Sept. 20. It was a scene far removed from that bottom-level event at Penn National.

Abi Skillman, who competes in hunter shows and operates a lesson program at her farm in Kingsville, Md., offered Fort as the mount for Penelope Miller of America’s Best Racing. Miller, competing for team Racing Media, finished second in the 2018 event, and met Fort the day before this year’s show jumping competition.

“I was incredibly lucky to ride Fort in this year’s Real Rider Cup,” Miller said. “He’s absolutely everything you could want in a horse: honest, kind, athletic and forgiving. I quickly learned that if we made a mistake, it was 100-percent pilot error; once I figured that out, all I had to do was point him in the right direction and let him do his thing. He saw every spot and changed leads like a pro.”

“After our round,” said Miller, “Fort further proved his status as a rock star by giving Gabriella a ride, walking as softly as an old school pony just steps away from a busy, unfamiliar show ring. Horses like Fort are worth their weight in gold, and I can’t thank Abi Skillman enough for letting me aboard in the Real Rider Cup.”

Skillman has had Fort since November 2018 when Val Hamilton contacted her and proposed a lease situation.

“Val called me and said, ‘You know my horse Captain...’ and I was like ‘Oh yeah.’ I knew everything he had done and thought there was no way any of my kids could have leased him. I was sure it would have been $8,000 to $10,000 per year. She then said he was free, and she just wanted him to have a good home, so I said OK right away.”

Hamilton bought Fort seven years ago as a junior hunter prospect for her daughter Devyn Hennessey, now 21 and attending the University of Findlay in Ohio.

Hamilton was able to piece together the horse’s history through a paper trail that revealed the gelding had gone from a pampered show horse to scrounging for grass in a field in Churchville, Md.

“He’d had a great start off the track; he started doing the A show circuit really young,” she said. “He was then sold to a very nice girl on the Eastern Shore who showed him for a while. When she stopped, he just hung out in a field not doing much for three years. She then sold him to a girl who said she wanted to get back into showing.”

The horse popped up on Hamilton’s radar when that owner advertised him for sale. Hamilton was in Florida at the time and asked a friend to look at the horse.

“She called and said he was in a terrible situation. She said he was a mess; he wasn’t being fed, his feet were in terrible condition,” said Hamilton. “The girl who had him said she had no money to feed him. She just handed his Jockey Club papers and everything to my friend. I didn’t even know what I was going to do with him at that point; but even though I was in Florida, I wasn’t going to leave him in those conditions. So we just brought him home.”

The photos Hamilton had seen of the horse had been taken when his previous owner was showing him; the images bore no resemblance to the reality standing in that Churchville pasture. A subsequent exam by Hamilton’s vet revealed Lyme Disease and worms.
“But I saw something in his eye and just refused to give up on him.” Hamilton said. “Was he a nice horse who fell through the cracks, or did he fall through the cracks because no one wanted to put the time and energy into him? And that’s what it was. He had the talent.”

Hamilton, Hennessey and their trainer nursed the horse they called Captain back to health for three months and then began his re-training. Adjectives like “beast,” “rank,” “angry” and “tough” were used most frequently. He was horrendous each time Hennessey climbed aboard. Hamilton was determined to figure out what made Captain tick.

“Devyn was 14 at the time. The third time she came out she said ‘OK, this is my last try. If I can’t break through, then he’s just too dangerous to ride.’ But she just never gave up. She put blood, sweat and tears into him, and he became the Little Engine That Could.”

Rechristened “Ringside Gossip” for the show ring, Fort chugged all the way to prestigious competitions including the Upperville Colt and Horse Show, the oldest horse show in America. Hennessey and Captain became best friends, and their reputation preceded them on the Mid-Atlantic show circuit. Everyone knew Ringside Gossip…and everyone wished they owned him.

“He’s a mother’s dream. I just trusted him and her,” Hamilton said. “You know he’s going to go in there and jump; he won’t let your kid down. And I knew my daughter could ride him through anything.”

Hamilton immediately had Skillman in mind when looking to place Captain last year.

“I called Abi because I wanted to trust where my boy was. He’s too sweet, and he loves showing.”

“He’s been awesome,” Skillman said, “We brought him home and I didn’t have a ring at my facility yet, so we just hacked around the field and he was wonderful. He’s perfect at horse shows, and he loves kids.”

Skillman has used him in lessons with children as well as beginner adults, and he has provided the perfect introduction to showing no matter who is in the saddle.

The 20-year-old shows no signs of slowing down. Two weeks before the Real Rider Cup, Skillman rode him at the Ludwig’s Corner Horse Show in Chester County, Pa.

“He was champion in the 3-foot Thoroughbred Division and champion Thoroughbred for the entire show. He’s been really great and so much fun.” 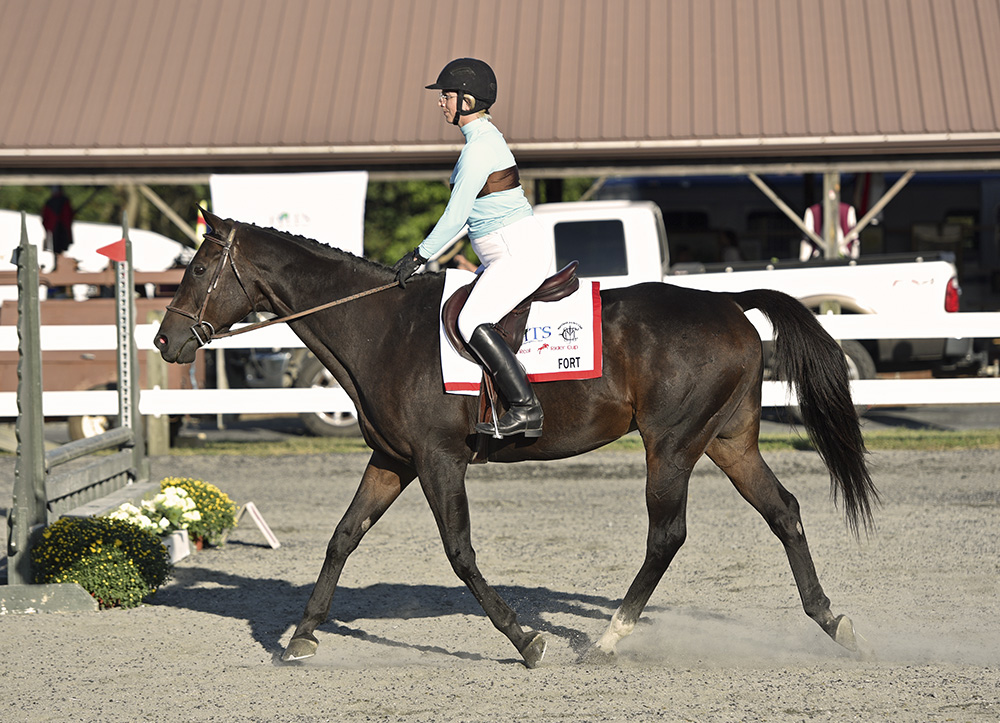 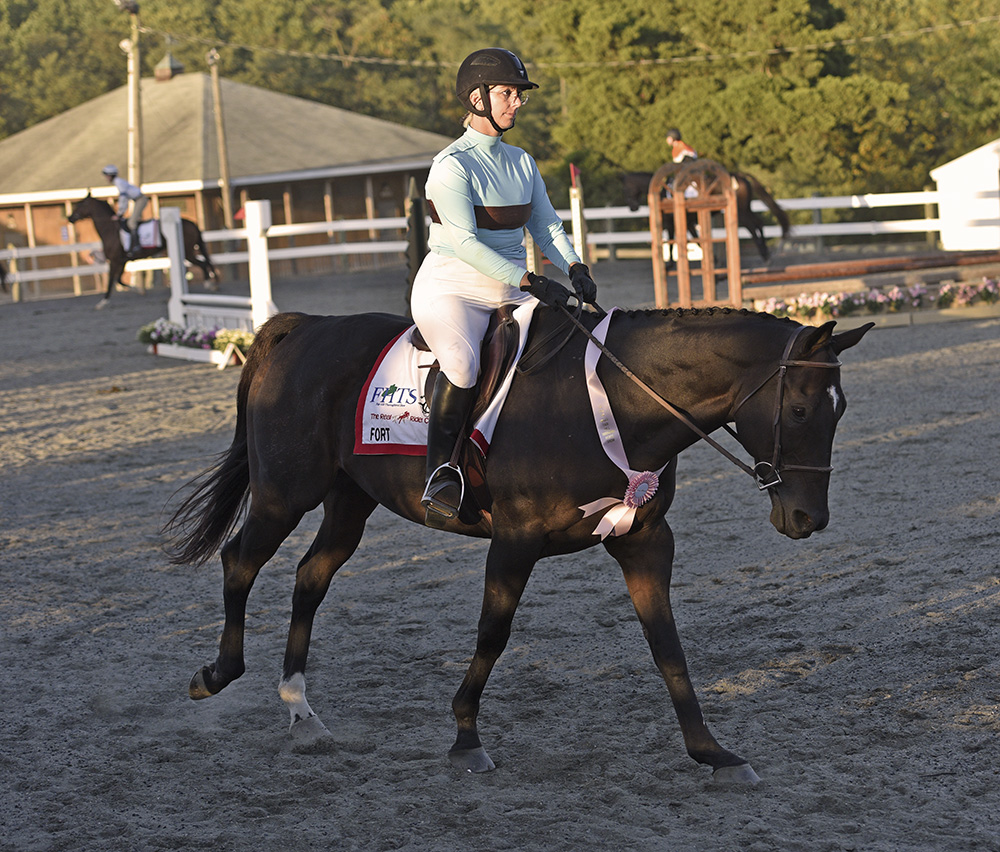