"He’s wonderful; he’s the best horse ever. He’s the world’s largest lap dog. And I guess that’s all I need to say.” 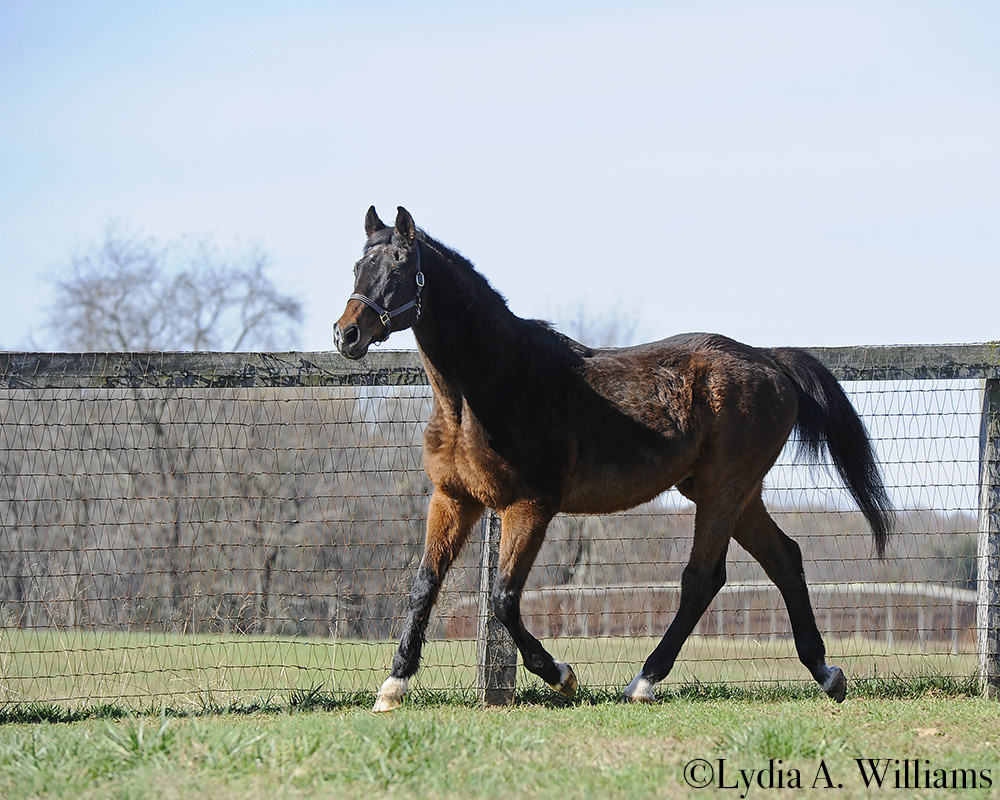 Peter Giangiulio said a great deal more than that about Harry the Hat. After 25 years at Giangiulio’s Castle Rock Farm in West Chester, Pa., the 30-year-old retired stallion reigns supreme among the small band of elder statesmen pensioned on the 170-acre property.

While he was considered “an underachiever” on the racetrack, with a record of 36-3-5-7 and $76,108 earned, it would have been difficult for any horse to live up to his spectacular pedigree. Bred in Kentucky by Louis and Patrice Wolfson, David Ringler and Ethel Jacobs, the son of Seattle Slew was produced by the Affirmed mare Affirmatively. Though she won just two races, Harry the Hat’s dam was racing royalty as a daughter of the Hail to Reason mare Straight Deal. She won 21 races, placed in another 30 and earned $733,020 for Patrice Wolfson’s parents Ethel and Hirsch Jacobs. In 1967, she made 22 starts – winning, among other races, the Delaware Handicap, Spinster, Vineland, Top Flight, Bed o’ Roses and Orchid – and was named champion handicap mare.

Jeanne Vance purchased the colt at the 1990 Keeneland July Select Yearling sale for $575,000, and he began his career for her at Saratoga in July 1991. He finally broke his maiden for his patient owner nearly a year later at Calder.

Vance protected her colt from the claim box, running in allowance races for three seasons before consigning him to Belmont’s horses of racing age sale at the end of 1993. He was purchased for $25,000 by Roy and Carol Ann Farrell and sent to trainer Pam Shavelson at Philadelphia Park (now Parx Racing) for the start of the 1994 season.

Giangiulio saw Harry the Hat in the entries and immediately honed in on the horse’s exceptional bloodlines. He knew Shavelson and the Farrells casually, but enough to approach them with a proposition.

“I talked to Pam, and then every time Harry ran, I went to the track. He was drop-dead gorgeous, just extra-special. And I talked to Mr. Farrell to the point where he finally said to me ‘Look, leave me alone . . . it’s his last year, and you’re gonna get the horse.’ So I said to Pam, ‘Listen, if I get this horse I’ll take care of you. Put in a good word; you know what we do here [at the farm] – he’ll have a long and happy life.’ She said – and I’ve never forgotten this and have loved her for it every minute – ‘I don’t want any money, I just want you to take care of my horse.’ ”

Giangiulio exceeded his end of the bargain. A past president of the Pennsylvania Horse Breeders Association and board member for 42 years, Giangiulio has owned Castle Rock Farm with his sister, Barbara Geraghty, since 1979. Farm manager June Hillman has held her post since 1995, shortly after Harry the Hat arrived. At one point, the first initials of the Castle Rock stallion roster spelled out the acronym for the breeders’ association: Power of Mind, Harry the Hat, Bombardier and Alyten.

“When he was standing at stud, he was easily the best-bred horse in Pennsylvania,” Giangiulio said. “And at that time I was standing a Mr. Prospector, a Deputy Minister, an Alydar and Harry. And here he is, literally 25 years later. He does great; he’s just fantastic.”

Harry the Hat’s best offspring came early in his stud career. Betty’s Hat, a foal of 1996 bred in Pennsylvania by Susan Walmer, was a multiple stakes winner of 13 races and $364,588. The daughter of the Allen’s Prospect mare Bear No Evil was “a flat runner,” according to Giangiulio. “Betty’s Hat was something.”

Several show- and sport-horse mares were bred to Harry the Hat over the years as well. Some of those breeding contracts were creative, if unconventional.

“I traded a breeding to Harry for riding lessons for my daughter with a next-door neighbor, Gaye Cohen, and I kept the mare at the farm. Gaye sold the foal out of the ring at Devon for $35,000 as a yearling.”

Harry the Hat’s last foal, Deerstalker, is a homebred for Giangiulio and currently in training. Now 5, he is out of another homebred – Just Contrary, by Power by Far. Giangiulio explained the clever twist to the gelding’s name.

“Sherlock Holmes’ hat is called a deerstalker. So a deerstalker is the hat of the most contrary figure in literature. And he’s been a very useful horse.”

Deerstalker’s crop was Harry the Hat’s last; in 2014, he failed to get any of the few mares bred to him in foal.

“Then we stopped on him,” Giangiulio said. “And his pension plan is all paid up.”

Four stallions still reside at Castle Rock Farm. In addition to Harry the Hat, the squad includes Partners Hero, 25; Power by Far, 24; and Rimrod, 19. Those three still breed when booked, but Castle Rock has no plans to stand more stallions.

Castle Rock Farm has operated as half-Thoroughbred nursery, half-boarding facility for several years. Hillman oversees that end of the business, which Giangiulio refers to as “the Happy Face Place.”

“June is unbelievable in the atmosphere she promotes. And these people love coming here. You walk into that barn, and everyone is smiling. There’s no controversy, no argument, it’s just so pleasant.”

One of Hillman’s current projects is another homebred Harry the Hat gelding named Teflon Tony. The 9-year-old out of Not Very Ladylike (by Bombardier) ran 44 times and earned $170,282.

“Tony was one of Harry’s most consistent and wonderful offspring, and he’s just like his father. He’s a love,” Giangiulio said. “My trainer, Alan Bedard, just loved him. I ended up selling him and we got him back here through the Turning For Home program. June is reschooling him and we’ll place him in a permanent home.”

Hillman shared a few of Harry the Hat’s endearing traits. When visited by children attending a nearby camp years ago, he developed the habit of sticking out his tongue whenever one of them touched his nose. It became a lifelong habit. Any visitor stroking his nose is presented with his (occasionally rather sloppy) tongue.

One ear pitches forward if something gets the horse’s attention, but the other remains cocked in another direction, as if he’s constantly listening to everything going on around him. “That’s a Harry thing,” Hillman relayed.

Giangiulio checks on the four old boys himself every night, and Harry the Hat remains the sentimental favorite. He trots into his in-and-out stall each time his owner arrives, nickering a greeting in exchange for his evening snack of a handful of grain.

“These horses are your lifeline,” Giangiuilo said. “And it’s been a really nice adventure with Harry. He’s just so happy, one of those cultured individuals. We love the old guy.” 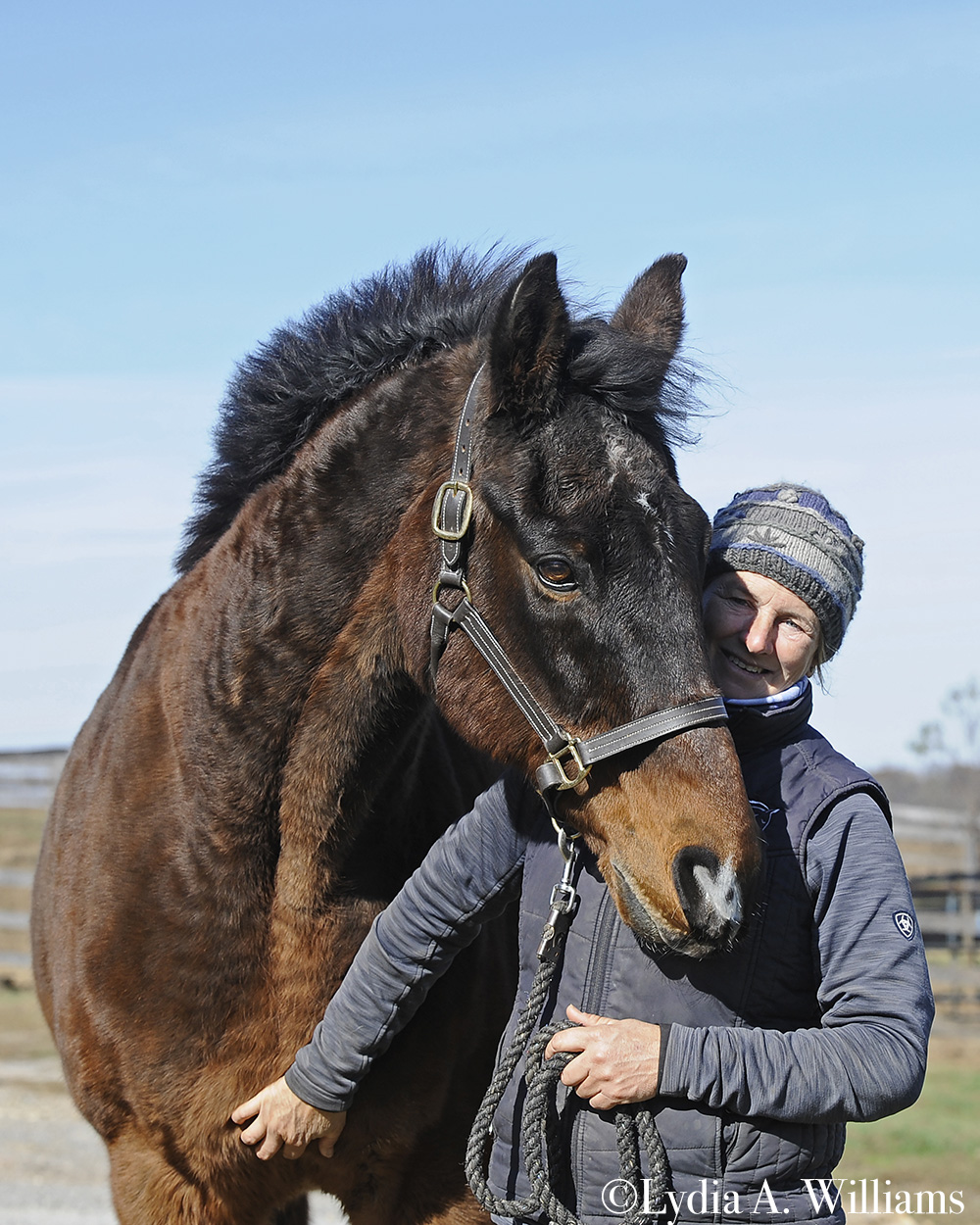