Speak with Chris Boniface or her son Fritz for more than a few minutes, and the subject inevitably gravitates to Moonsox. The experiences differ slightly, but the deeply rooted affection for the 14-year-old chestnut gelding dovetails. Chris repeatedly calls him “quirky” and “very special.” Fritz unashamedly admits, “Moonsox is the love of my life.” 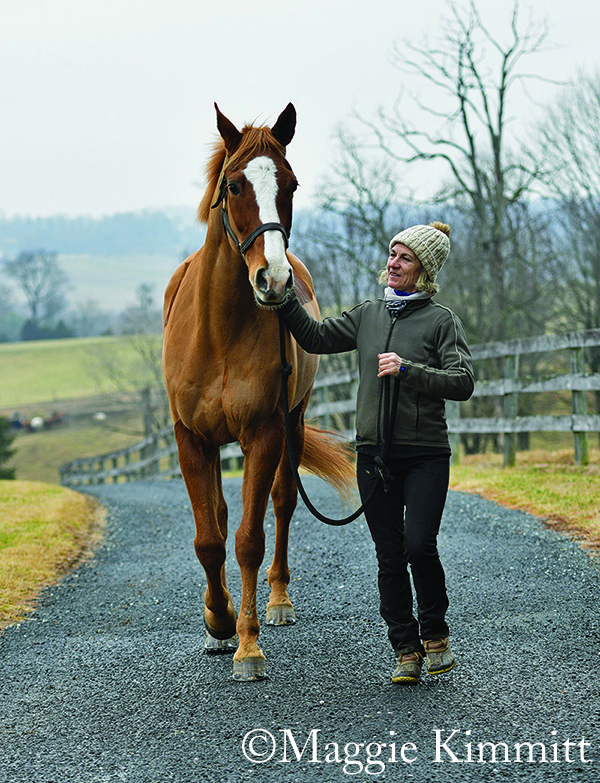 In the Thoroughbred industry, there are a few historic, family-owned farms richly embedded in Maryland racing: The Pons family’s Country Life and Merryland Farms; Elberton Hill, owned by the Hopkins family; and the Boniface clan’s Bonita Farm. And few horses are more Boniface than Moonsox.

Bred by Richard Granville, Moonsox was foaled at the Darlington farm on April 23, 2006. Sired by the elegantly bred Mojave Moon (Mr. Prospector—East of the Moon, by Private Account), Moonsox was the first and only foal from the Deputed Testamony mare Sister Sox. She was a full-sister to Granville’s Winsox, a multiple stakes-winning earner of $523,863.

“Sister Sox was one of the first fillies that I really started galloping and connected with,” Fritz said. “She retired and stayed on the farm to become a broodmare, and Moony was the only foal that she ended up having. And I remember going out into the field to see him when he was a foal and saying, ‘You’re going to be my jumper one day.’ ”

Trained by Kevin Boniface, Chris’ husband and Fritz’s father, Moonsox made six starts on the flat in 2009 before trying hurdles at the Virginia Fall Races in October. He was outrun in a field of 14 going 2 1⁄8 miles and pulled up. Four more flat starts, two for a $5,000 claiming price, followed with no success to complete the 2009 season.

Third three times on the flat, Moonsox was destined for timber racing with its distances of 3 miles and beyond. Bonita client Jim Foulk bought the chestnut from Granville, and the Moonsox project began. The Bonifaces (Kevin, Chris and Fritz) plus farm staffer Lia McGuirk built three schooling fences on Foulk’s farm a short drive up Harmony Church Road and got to work.

“I had another project up here that I was retraining, so it just suited us,” Chris said. “And it’s a nice place to have a jumper. This was the first time we had brought a horse up here to train for racing.”

“Right away you could tell that he loved it,” Fritz added. “He was always a happy horse and it was fun to be around him. But when we started taking him over fences, his personality really opened up.”

Two years older, bigger and stronger, Moonsox made his timber debut at Virginia’s Piedmont Point-to-Point in Virginia early in 2011. He jumped well for Fritz, but finished ninth and emerged with a cut on a hind ankle. That delayed Moonsox’s second start until Fair Hill in late May.

“He was second. It was crazy,” Chris said. “There’s a reason Fritz calls him the love of his life. Over one of those fences at Fair Hill, another horse just slammed into him in mid-air over a fence. They landed, Fritz lost his stirrups and was on the horse’s neck. Moony was a young, green horse at the time and could have ducked sideways. But he just kept on galloping and Fritz worked his way back into the tack. And we were very excited that they finished second that day.”

Things got crazier. Moonsox did well enough when third at Shawan Downs in September to warrant a trip to Genesee Valley in upstate New York two weeks later. They lined up as the favorites in a three-horse field.

“We thought it would be a great experience for him,” Fritz said. “Going into the first fence, there was bunch of snow fence and the whole crowd was right there, and he just started picking his head up. He was so distracted by everything going on that he didn’t even see the first fence until we were about two strides away from it. Then he got into it and popped it huge. And I just disconnected, and he sent me straight up into the air. I remember I went straight down to the ground, and he ran right to the trailer. We were so bummed. We’d gone all the way up there for that.”

Back to the drawing board, the squad prepared for the next start on the Pennsylvania Hunt Cup card a month later. A less determined group would have quit after a series of events the day before that race.

“He’s very quirky – you think he’s committed, but if he doesn’t have company he’s like his uncle [Winsox], who would drop us all,” Chris said. “So he dropped Fritz a couple of times that day, and we chased him for 45 minutes all around this farm.”

“Guys, we’re entered, we’re not going to worry about this,” he said. “We’ve just gotta go get this done.”

In the jockeys’ room the next day, Fritz approached his fellow riders about their strategies for the race. He explained that all he needed was a lead down to the first fence and asked if someone could extend that professional courtesy.

Five horses and riders lined up, the starter dropped the flag –
and absolutely nothing happened. No one went.

“I looked down the line at everyone, and I swear the jockeys and the horses themselves were just staring at me,” Fritz said. “Then I just took off. Moony went brilliantly around there, and at the second-last fence two horses came up on my inside, we jumped that one together and both horses fell. So then it’s just me alone, well ahead of the field with one fence to go, and all I could think about was the first fence at Genesee Valley and that last schooling fence at home. I was like ‘Please, please, please’ and he just sailed it. I remember getting over that last fence and standing up on him with my hand in the air. The happiest day of my life maybe, getting that horse to win a race.”

McGuirk knows the feeling. If Chris or Fritz were unable to school the chestnut, McGuirk rode him.

“I started doing a lot of ringwork with him, gridwork and flatwork. It fell into place because I already had a relationship with the horse.”

She accompanied him for all but two of his races, often riding along in the back of the van. For the 2013 season, McGuirk became Moonsox’s jockey too. Racing for Nelson and Traveller Stable, the racing name of Kevin and Chris’ oldest daughter, Michelle Boniface St. John, and her husband, Harry.

McGuirk’s first sanctioned start was the My Lady’s Manor Timber Stakes in Monkton, Md. They won it over timber stalwarts Bon Caddo, Straight to It and Grinding Speed. She piloted Moonsox in all six of his starts that year, with Fritz climbing back aboard (except for one start for Ross Geraghty in April) in 2014.

Fritz and Moonsox found the winner’s circle twice that May with scores in Winterthur’s open timber and the Radnor Hunt Cup timber stakes. Returning to Middleburg in October after his summer break, Moonsox suffered a career-ending tendon injury.

“He finished fourth, but I looked down and Fritz was off him. He bowed that left front badly,” said Chris. “A case could probably have been made to put him down, but there was no way we were going to do that.”

“He’s just a really, really cool horse and means so much to everyone,” McGuirk said. “He’s such a great hometown story, by Mojave Moon and the dam’s side is so important to Kevin with him being related to Winsox.”

Through six months of stall rest, Chris called Moonsox “the perfect patient.” Always wanting a job, he gradually became a foxhunter – a role he still relishes and fulfills today. Kevin and Chris enjoy hunting with Maryland’s Mt. Carmel Hounds, sharing the mount on Moonsox. On a recent outing, he and Kevin babysat young Liam St. John, Michelle and Harry’s son, on Mouse, the snow-white miniature horse who lives with the gelding.

“You have a pony with a kid next to him, and he can just walk around and be super responsible,” Fritz said. “Then sometimes he can be a little bit quirky; he’s just got a big personality. He keeps you on your toes, but you know you can trust him. And that’s part of the reason I love him so much.” 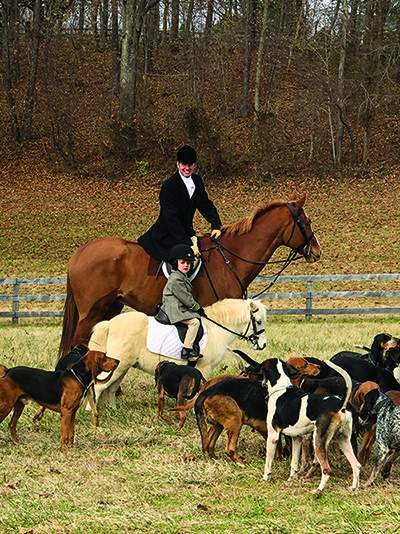