Sean Clancy traveled to Keeneland for the 2010 November sale on a mission. Mill Ridge listed Juddmonte Farms’ Eagle Poise in its horses-of-racing-age consignment. Mark Grier provided motivation. Already the owner of a few flat horses and a regular at the Far Hills Races in his hometown, Grier asked Clancy to find a good, solid prospect for jump racing. 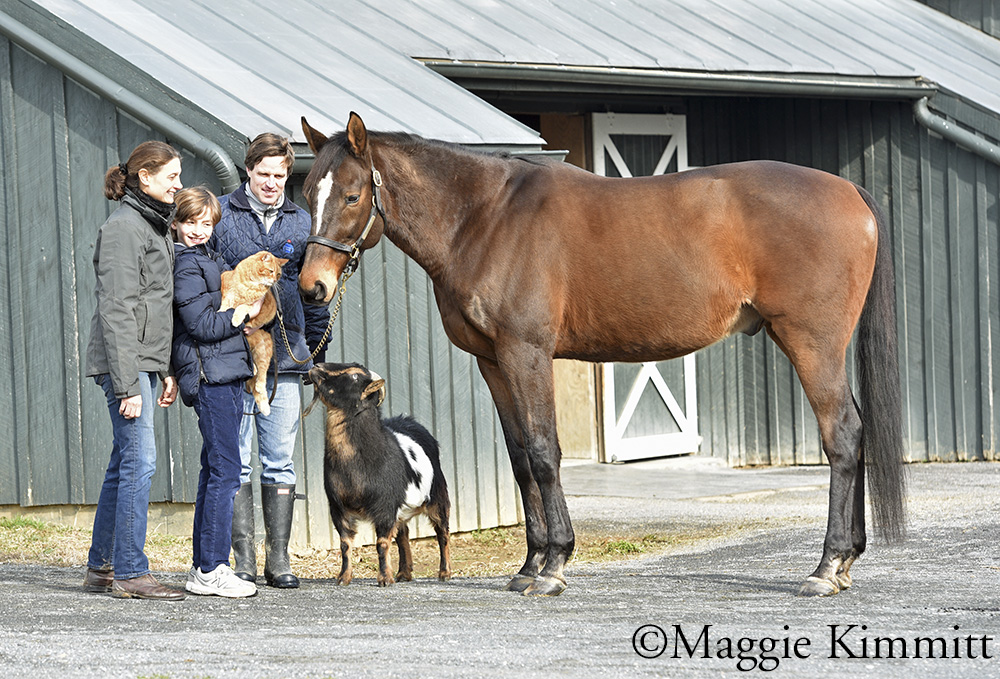 “I think Mark Hennig introduced us one day just hanging out in the paddock at Pimlico,” Grier said in February. “I was thinking of getting involved in steeplechase racing, so I called Sean. I was involved in various aspects of flat racing, including my own horses and some owned through partnership programs. From there, while the theme was steeplechase racing, I had an open mind and trusted Sean. I wanted him to do things that he thought made sense.”

Despite Grier’s backing, Clancy worried that Eagle Poise might still be too expensive. The then 4-year-old colt had placed in a graded stakes, and carried plenty of pedigree as the son of Empire Maker and the Nureyev mare Reams of Verse. Trained by Sir Henry Cecil, Reams of Verse won four group stakes in England – including the Epsom Oaks-G1 and Ascot’s Fillies’ Mile Stakes-G1 – and earned $539,152.

Clancy followed Eagle Poise during his first two seasons on the track. Trained first by Bobby Frankel and then his assistant Brian Lynch at Woodbine, the horse was transferred to Bill Mott after Frankel passed away in November 2009.

“He’s a typical Juddmonte horse, but he wasn’t really suiting them and wasn’t going to be a Grade 1 horse,” Clancy said. “When I first started writing, one of my first real gigs was covering the Triple Crown for Mid-Atlantic Thoroughbred. I had followed Empire Maker [in 2003], loved him, and I spent a lot of time with Frankel and the horse. So I always followed his offspring; they’re tough and they stay.”

At Keeneland, Eagle Poise made an immediate impression.

“He had this beautiful walk, and you can’t fault his conformation, so yeah I loved him, and I was afraid I wouldn’t be able to buy him,” Clancy said. “I sat around all day waiting for him. I had different steeplechase clients, friends and peers – all at the sale – and they kept asking me, ‘You got your eye on something?’ I finally sat in the far corner for the whole day because I was just so tired of talking to people and having to lie – I was acting like I didn’t like anything.”

Clancy got his horse for $65,000, but was at once elated and panicked. Expecting the colt to sell for at least $100,000, he snagged a bargain. But there was a flip side. . . had he missed some-thing? Grier was much more relaxed.

“I think we were pretty happy with the purchase price,” he said. “At the time, when I knew how much Sean liked him, I thought there was probably room in the price. We ended up doing very well, and then we went on from there to have a great time with him. I think for our strategy, which was for steeplechase racing in the back of our minds, and given his pedigree, his affinity for turf and the way he ran, that would have been a possibility although we were very happy to buy him for flat racing.”

Anne laughed at the memory of encountering Sean leading a fully tacked Eagle Poise up the driveway when she arrived home one day.

“Did you fall off?” she asked.

“No, I stepped off before I got bucked off.”

And so it went. Anne soon found herself on the receiving end of a near miss with Eagle Poise too.

“We have all of these rules about closing the gate behind ourselves whenever we go into the field,” she said. “But I went out to catch him and he was standing right inside the gate. I went inside, and he reared up and slapped at me. So I jumped back – and it was a windy day – and the gate blew open. He looked at me, I looked at him, and before I could do anything, he darted out the gate.”

Sean was not home, and Anne was out at the barn with their son Miles, a baby at the time. Albert Smith, who helps out at the farm, saved the day.

“I sat the baby safely out of the way, and there was Sean’s favorite racehorse running wild all over this farm,” Anne said. “I couldn’t get near him.”
At one point, Eagle Poise appeared to be headed out the driveway, but he turned around and came back toward the barn. Smith walked up, “real slow,” and grabbed the loose horse.

“When do you think he should go?”

“I think he should go tomorrow.”

Not necessarily the next day, but shortly thereafter, Eagle Poise went to Graham Motion at Fair Hill. In distance turf/synthetic races over the next four seasons, the Kentucky-bred bore the Riverdee Stable colors for the Clancys and Grier, almost entirely in stakes company. Grier made it to the races as much as he could, and a trip to Toronto still rates as a favorite moment.

“When I think of Eagle Poise, I think of the two of us – Sean and me – flying up to Toronto in the winter,” said Grier of a start in the Valedictory Stakes-G3 Dec. 4, 2011. “It was dark and it was cold, and he had won the prep race. So we were very optimistic about that race. And we were treated like kings. They did a really nice job for us as owners. And being there to watch him win that race was fabulous.” 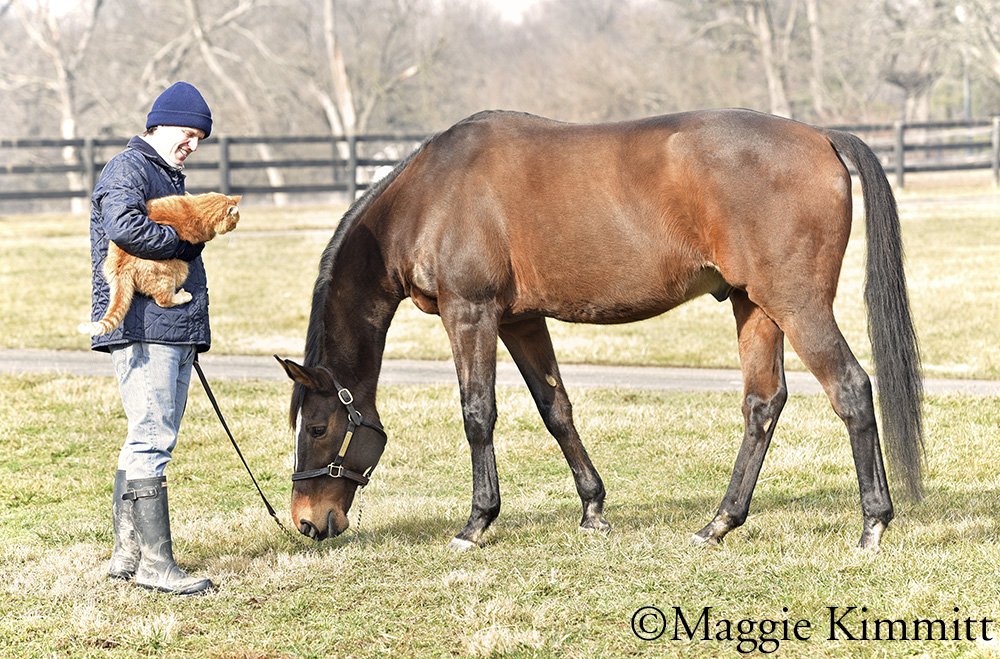 The next year, Eagle Poise finished second, a fraction of a nose behind Bourbon Bay, in the San Juan Capistrano-G2 going 13⁄4 miles at Santa Anita. His 2013 campaign included seconds in the Laurel Turf Cup, Sycamore Stakes at Keeneland, and another Valedictory.

Eagle Poise never did start over fences, and was retired after two starts in 2014. He earned $519,609, won six of 29 starts and placed in 10 others. Decompression took time.

“Eventually he was perfect. He’s actually been a dream,” Anne said. “He’s been here for six years and it’s a different life now.”

Sean gives all credit to Anne for patiently turning the powerful and opinionated horse into an elegant jumper in the show ring. Over the summer, Eagle Poise competed in the schooling jumper division (2-foot-9 to 3-foot jumps) at HITS Culpeper in Virginia.

“Show jumping and dressage training entail many hours of practice and require a certain amount of submissiveness and collection,” said Anne. “At 14 years old, these qualities are not high on his to-do list. He is fun to ride, but not always fun to train. We have come to an agreement. We will do as much practicing and showing as we both enjoy, and he physically can handle.”

Eagle Poise spent most of the fall and winter getting turned out, but the work – if you want to call it that – will start again soon.

“He was a good racehorse and is an even better athletic specimen for the Thoroughbred breed,” Anne said. “He would have been a great steeplechaser, eventer, show jumper or foxhunter. He is simply a good horse. He has earned his peaceful retirement but that’s not always easy with his work ethic and need for attention.”

Eagle Poise makes sure he gets plenty of the latter, by playing Houdini in the barn (he can undo the latch on his stall door and a webbing “runner” with ease) or the thus-far-unsuccessful challenge of destroying an automatic waterer in the field.

“It is now a game,” said Anne. “I clean it, he splashes in it with his front feet and fills it with dirt. He controls which pasturemate gets to drink and when. Of course, he is always first.”

“I have fond memories and the same affinity for him that Sean and Anne do,” he said.