In her role as photographer and photo editor for Thoroughbred Daily News, Sarah Andrew has known countless Thoroughbreds, both on and off the racetrack. Many of her subjects are household names photographed in some of the biggest stakes races in North America. But it’s a 24-year-old New Jersey-bred winner of one race who has her heart. 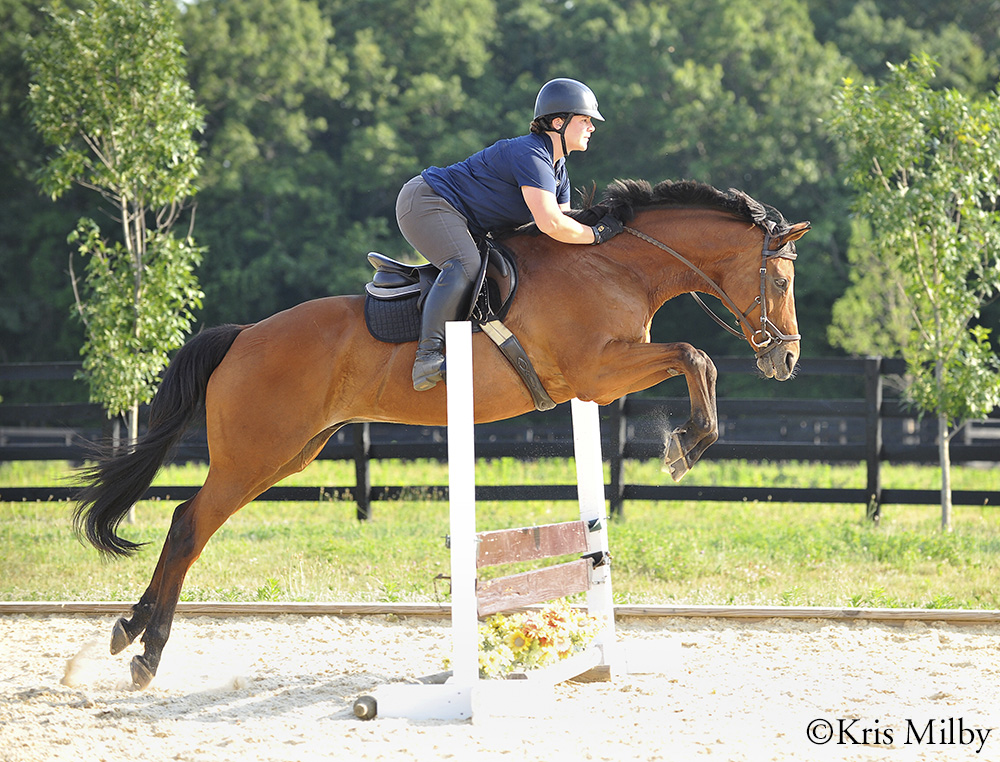 In 2008, cancer claimed Alibhai’s Alibar, the 29-year-old Appaloosa/Quarter Horse/Thoroughbred cross Andrew and a close friend owned for 20 years. On that very day, the generosity of a friend helped minimize the sense of loss. Andrew boarded her horse at a facility managed by Bill Fox, who kept several horses at the farm.

“The day that we put Alibar down, I was just a lost soul. It was such a deep loss, I didn’t know what to do with myself,” said Andrew. “I think Bill could see that, and he said, ‘Any one of my horses – if you want to work with them, or groom them, or ride them. . . do whatever you want.’ If it weren’t for that, I don’t know when I would have gotten back to it.”

Andrew chose a 12-year-old bay gelding Fox called Wizard whom he had re-trained for barrel racing – and that was pretty much the extent of what Andrew knew about the horse.

“I don’t know if it was his personality, because he does not look like a barrel racer to me. He’s 16.1 and long-backed,” she said. “I wouldn’t have picked him as a barrel racer, that’s for sure. But Bill liked him, and they did do a little bit of it.”

Fox had the horse’s Jockey Club papers, enabling Andrew to fill in the blanks of Wizard’s story.

By Secret Hello out of the Slewpy mare Slewper Girl, Doctor’s Secret was foaled on Feb. 5, 1996, at the farm of his breeder, Dr. Y. Jerry Kolybabiuk, who raced as Freedom Acres. The surgeon had such high hopes for the bay colt that he and his family called him “Champ” around the farm.

“They were sure he was going to be the next big thing,” Andrew said. Doctor’s Secret made 15 starts at Monmouth Park, the Meadowlands and Philadelphia Park (now Parx Racing), finding the winner’s circle just once in a 6-furlong $10,000 maiden claimer Oct. 27, 1999. He made his final start as a 4-year-old for a $5,000 tag where the chart stated he was “never a factor.” His lifetime earnings totaled $11,500.

“Wizard’s dam had just two foals. His sister was a little more successful than he was. Her name was Love’s Legacy, and she was stakes-placed. I got in touch with Dr. Kolybabiuk a few years ago. He’s a really nice guy and was so generous. He sent me baby pictures of Wizard, and he still had all the paperwork from when he did his pedigree research and planned out the mating. He sent it all to me, and it was such a treasure to get that from him and to think about everything that went into it. You meet these horses and you know who they are, but then you realize everybody else who had a hand in who they are too.”

Andrew’s career in the racing industry began with track photographer Bill Denver at Meadowlands and Monmouth Park, eventually leading to the position with TDN in 2007. An off-track Thoroughbred was a logical next step for her after the loss of Alibar, and Wizard proved to be a great fit.

“He was just a pasture puff when I met him, just living the good life at Bill’s place. He was broke enough – plenty of people had ridden him. But I think that he was pretty light on the training side of things and they hadn’t asked a lot of him during his time there.”

Andrew grew up showing in hunter/jumper competitions but had little interest in pursuing a serious show career. She and Wizard participated in the occasional small local show, dressage competition or paper chase. Close proximity to state parks provided great opportunity for hacking out and trail riding.

“I’ve ridden out with the Monmouth Hunt a few times. There was a farm where I kept him that backed up to a wildlife management area which is the Monmouth County Hunt territory. So I could just hack him over there to the hunt club, which was pretty cool. He’s a really nice trail horse.”

He’s also the ideal photographic model. A resplendent Wizard is seen in many of Andrew’s social media posts, wearing Santa hats, Happy Birthday garlands or just posing for portraits. Followers are often treated to “Wizzygrams” depicting everything from splashing in knee-deep mud puddles to schooling over grids and challenging trot pole exercises.

“I think he became a muse for me just because he’s such a nice-looking horse and he’s fun to work with. You can pose him anywhere and he’ll stand for you. You can turn him loose, he’ll run around in a field. He’s a photographer’s dream.”

When her schedule allows, Andrew rides Wizard four to five times a week. Although stylish over fences with tight knees and a beautiful bascule, Wizard tends to get pretty torqued while jumping so Andrew keeps it light.
“He likes to work and has a great work ethic. He never says no – he’s just that kind of horse,” Andrew said. “It’s all light riding, nothing serious. I’ll take lessons and ride with a trainer now and then. All just real mellow, but I find that the frequent light rides do a world of good for him.”

Sadie’s Magic (Street Magician—Partner’s Devon, by Two Davids) won two races and $38,381 before bleeding so badly in her final start that she collapsed on the track at Delaware Park. Thankfully, she got up and has been fine ever since. Exhaustive and thorough veterinary care ruled out further starts, but the 7-year-old mare and owner Michelle Michael will be one of 616 Makeover entries at the Kentucky Horse Park Oct. 7-10. Wizard is doing his part to keep morale high.

“Wizard and Sadie are in stalls next to each other. . . and they’re also in love with each other,” Andrew laughed.

As she wrote in a recent post, “He’s not a TDN Rising Star or an Eclipse Award winner, but he brings a whole lot of happiness to everyone who knows and loves the wonderful Wizard.” 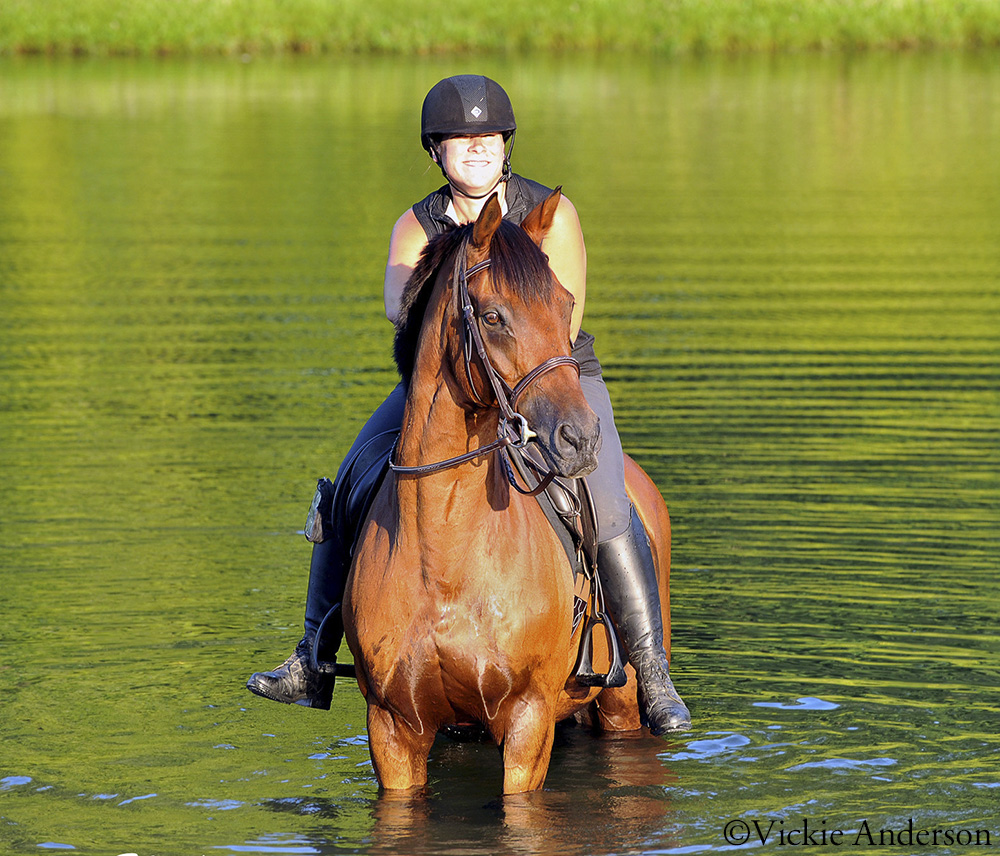