Details
From May 2020 Issue
Written by Maggie Kimmitt

Richard Valentine understands love at first sight. He knows it’s real. He’s got the Eclipse Award trophy to prove it. 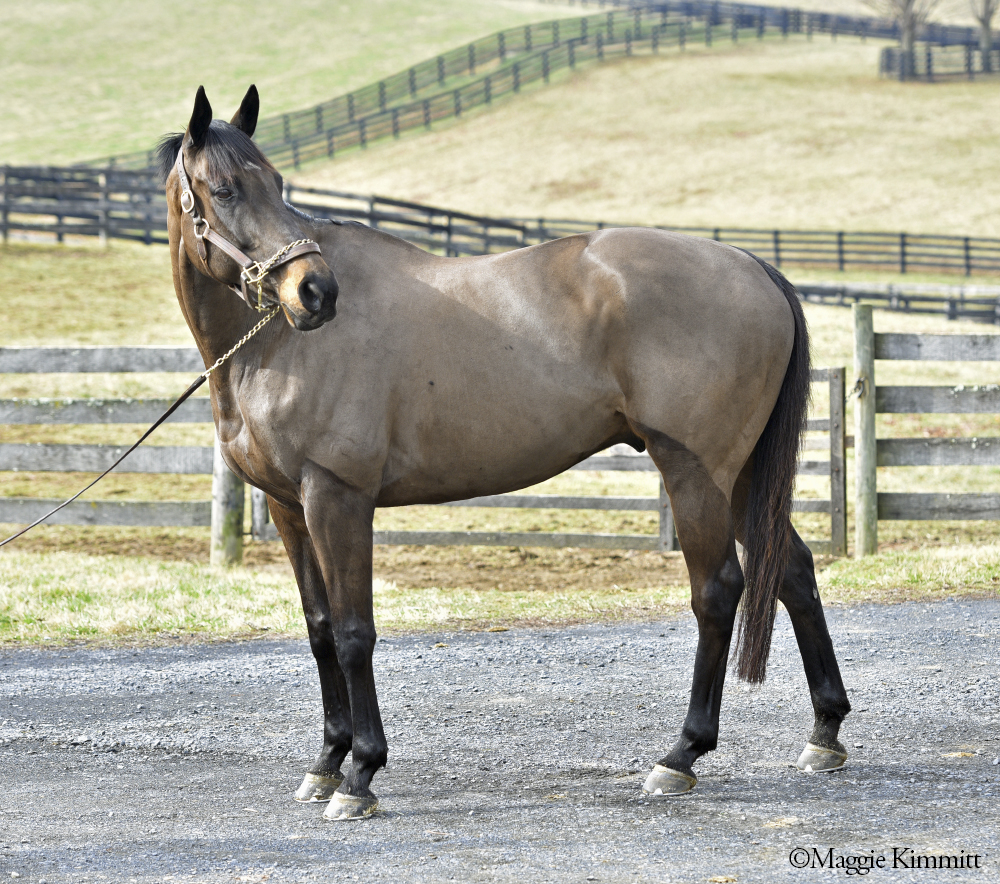 Valentine was in England for the 2010 Tattersalls July mixed sale when a sleek 3-year-old son of Elusive Quality grabbed his attention. Bred by Gainsborough Farm from the French Group 3-winning Quiet American mare Loving Pride, Demonstrative was offered by Kingsley House Stables. He listed one win among his 11 starts on the flat.

“He was one that Richard thought had the pedigree; he loved the Quiet American mares,” said Valentine’s long-time assistant, Laird George. “And from the minute Richard saw the horse, he loved him. It looked like Demonstrative wasn’t going to do well in the UK, so luckily for us, they put him in the sale.”

Hyphen Bloodstock signed the Tattersalls ticket for 25,000 guineas ($39,876) and Demonstrative headed to the Ohrstrom family’s Whitewood Farm, Valentine’s base of operations in The Plains, Va., to launch a career over hurdles for Jacqueline Ohrstrom.

Valentine and George schooled the horse themselves after his arrival, utilizing Whitewood’s vast fields and hills. Demonstrative made his first American start at Middleburg in a maiden special weight for 3-year-olds over hurdles on Oct. 3, 2010.

“He won his first race over fences very convincingly with Matt McCarron at Middleburg,” George said. “Then he ran at Far Hills [N.J.] and got run into at the start. Matt fell off, so he never started that race. Then he came right back at Camden and won again. He was champion 3-year-old that year. Yes, 2010 was good.”

Demonstrative met his most frequent pilot, Robbie Walsh, in 2011. After two allowance starts that spring, Demonstrative and Walsh vaulted to open stakes company. It wasn’t long before the bay established himself as a rising star on the steeplechase circuit.

“Horses like Demonstrative change how you ride. They’re that good; they teach you as you ride them,” Walsh said. “You know that when you put one in a bad spot that he gets you out of it. Or you know when you’re getting caught in traffic – some horses just can’t get out of that spot because they’re not good enough. And he could. I could be more confident on him because I knew I could just wait that little bit longer to get that gap.

“We developed over the years,” Walsh went on. “He was pretty keen early on, which I guess is partially why I suited him a little bit. I tend to get along with stronger horses because I can get them a little switched off. Richard always told me ‘Be careful – remember now, you’ll put a fire out.’”

Every season produced a sparkling Demonstrative highlight for the reel.

• 2011: a win in the William Entenmann novice stakes at Belmont Park.
• 2012: heavyweight triumphs in the Jonathan Kiser novice stakes and fabled New York Turf Writers Cup (the first Grade 1 for the horse and for Valentine) at Saratoga, and another Grade 1 score in the Colonial Cup at Camden, S.C. In the latter, he and McCarron (subbing for the injured Walsh) passed eight horses after the last fence to win by a length. The Eclipse Award went to Pierrot Lunaire by 17 votes (there were 36 abstentions).
• 2013: a season-opening win, by a neck over eventual Eclipse champion Divine Fortune, in Nashville’s Calvin Houghland Iroquois-G1. Third-place finisher Molotof (Fr) was 34 lengths behind.

After four consecutive losses that year, plus one more to start 2014, Demonstrative returned to form with a second in the A.P. Smithwick – by a nose at 15-1. He won his next three, each a Grade 1, with powerhouse performances in the Turf Writers, the Lonesome Glory at Belmont and the Grand National at Far Hills. Demonstrative was voted the Eclipse Award as champion steeplechase horse of 2014 by a resounding margin.

Valentine re-employed a successful strategy in 2015, opening the gelding’s season in the Iroquois at Nashville. With Jack Doyle subbing for the injured Walsh, Demonstrative won the final Grade 1 of his career. There were thirds in two additional Grade 1 tests: Saratoga’s A.P. Smithwick Memorial, and the season-ending Colonial Cup. Demonstrative returned at age 9 in 2016, running just three times and finishing off the board. He retired with one of American jump racing’s most decorated careers – seven Grade 1 wins, an Eclipse Award in 2014 and $940,300 in U.S. steeplechase earnings (fourth on the all-time list).

“A horse like him makes your career. Everyone knows who you are then,” Walsh said. “Every time I went to the races, I was on a horse with a shot in a Grade 1; one of the favorites. You’re consistently in the spotlight, and that’s a big key about racing. You’re only as good as the horses you ride. More than the volume of winners, it was the big days that were always the most important ones. They were the big buzz . . . to be on the best horses in the best races, that’s what you live for.”

Demonstrative went home to Valentine and George at Whitewood, but it’s been an active retirement.

“I’ve hunted Demonstrative maybe half a dozen times over the last three years,” George said. “He’s brilliant; absolutely loves it. He stands with his ears pricked and he listens to the hounds. He’s a professional.”

Owner Jacqueline Ohrstrom winters in Aiken, S.C., but lives at her Berrywick Farm adjacent to Whitewood. When in Virginia she sees Demonstrative regularly, stopping by for visits and treats for her famous retiree.

“She likes her horses a lot, win, lose or draw,” George said. “She might have missed a couple of his races, but once he established himself as a top horse, she didn’t miss any of them.”

Valentine winters with a string in Camden, but when home in Virginia he’s often aboard Demonstrative. Now 13, the bay is the best possible educator and mentor for the youngsters coming along for Valentine.

“There are times when he gets ridden a lot,” George said. “If somebody comes and it’s in the middle of the season, perhaps they just want to ride a horse. You can put them on Demonstrative because he is just the kindest, coolest horse. He’s very agreeable and has had an incredible disposition from the day he got here. Everything he’s done has been effortless and professional. Barring one situation . . .”

Before one Saratoga meet began, Valentine and George decided to use a flat race at Colonial Downs as an early summer tune-up. Knowing it would require a refresher course in the starting gate, George vanned Demonstrative over to Middleburg Training Center, where an assistant starter (named Goose) from the Maryland Jockey Club helped out a few days each week. Given how easily the horse always handled anything thrown his way, George naturally assumed this revisit would be an easy task.

All the way up until the moment Demon­­strative stood straight up in the stall and rattled the gate. Goose, who usually functioned under the belief that George was actually Valentine, issued a ruling.

“Richard, you better take that horse to Laurel where we have a whole gate crew.”

Not long after, George, Kieran Norris and Demonstrative followed instructions and headed to Laurel Park. “With the whole gate crew there, I sorta felt like it would go better this time,” George said. “We walked into the gate and he reared up twice, and my helmet hit the top of the gate both times. They pulled me off, backed him out and asked what was going on with him. We told them we were just trying to run him at Colonial one time . . . and they all said, ‘Maybe you should just keep running him over jumps.’

“And that was the only time Demon­strative has ever said no to anything.”