His dam Near Lyn, a foal of 1969, is a daughter of Nearctic. As in the sire of Northern Dancer. You don’t see that every day.

His name is Near the Limit. It’s right there on a plaque marking his paddock at Horseshoe Hill Farm in Ashland, Va. He was tough as a racehorse, earning $219,861 while etching a lifetime record of 30-10-4-4. As a stallion, he was bred to small books but always threw solid, good-looking horses. And to Stephanie Nixon, he’s the anchor that has sustained Horseshoe Hill, the family farm founded by her late father, Granville Brothers Jr. 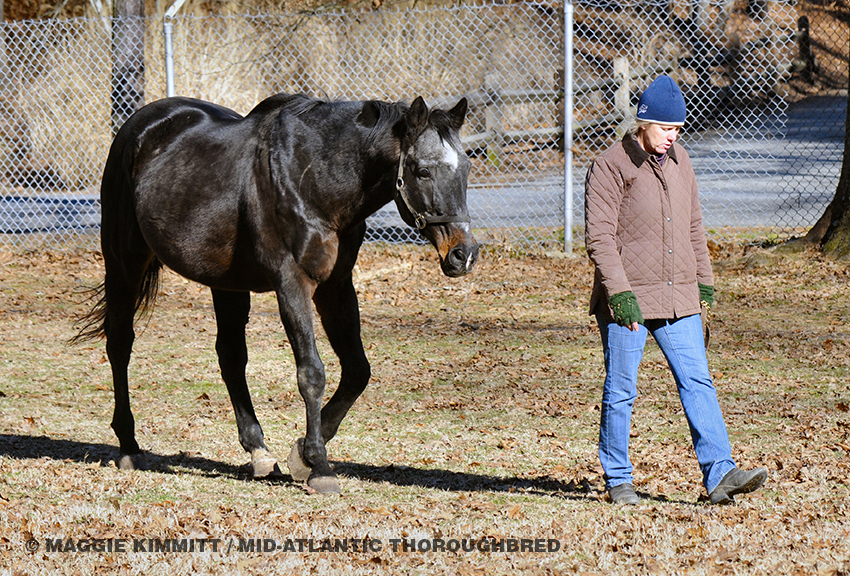 Brothers and his wife were living in Richmond and looking for a weekend retreat when they discovered a cabin on 50 wooded acres owned by a local physician. Brothers owned dry cleaners and other real estate, and had no background in racing. Not long after purchasing the property, he met Howard Gentry, manager of Meadow Stud, later the birthplace of Secretariat.

That association was enough for the racing bug to bite Brothers, who began spending weekends at Bowie Race Track in Maryland and eventually took out his trainer’s license. His son, Benny, galloped horses for his father. Stephanie, 15 years younger than her brother, grew up on the farm her parents purchased when she was just a few months old.

“I didn’t really appreciate it until I was older,” she said. “But I grew up with Maryland racing and I knew many of the trainers, gate crew, etc. So it was second nature for me to pick it up.”

Nixon got her trainer’s license as soon as Colonial Downs opened, usually taking a string of five to 10 runners to the New Kent track 50 miles down the road. In addition to homebreds, she also handled horses for Maryland trainers King Leatherbury and John Salzman.

Other long-time associates of the Brothers family were the late W. Meredith Bailes and his son, Robbie. Near the Limit, originally trained by Robert Wheeler, spent the majority of his racing career in the Bailes’ barn. As a 3-year-old in 1991, Near the Limit was hard on the Triple Crown trail with Wheeler. After winning an allowance at Fair Grounds in that season’s debut, he churned out seconds in the Lecomte Handicap, Louisiana Derby-G3, Cherry Hill Mile-G3 and Garden State Stakes-G3 and a third in the Remington Park Derby.

Purchased by Dan Agnew after the Garden State, the horse’s first start for the elder Bailes came in the Illinois Derby-G2. Thirteenth there, Near the Limit rebounded with a victory in Philadelphia Park’s Sentinel Stakes three weeks later. Suspensory issues plagued him the rest of his career, prompting prolonged layoffs. After just three starts in 1992, he was out of training in 1993 and returned early in 1994. That year, the then 6-year-old won three of his six starts. In 1995, his final season, he was no worse than fourth in four starts in the lower claiming ranks, winning his last two.

After his father passed away, Robbie Bailes took over training duties for most of the outfit’s clients.

“Mr. Agnew got to the point where he didn’t want to deal with claiming horses,” Bailes said. “He knew how much I liked Near the Limit, so he asked if I wanted to have him. He was all class; you could take a daggone 2-year-old kid in the stall with him. He’s a neat sonofagun. ”

Bailes liked him so much, in fact, that he hatched an idea. His father-in-law owned an unraced Full Intent filly named Final Session Bailes thought would be the perfect test for his 7-year-old stallion. Not that Bailes had any experience breeding horses, mind you.

“It was one of my grooms and me–we just went out in the field. My wife and I still laugh about it because our next-door neighbors were show-horse people, and they were probably thinking ‘What the heck are they doing?’ Unbelievable. But one cover and he got her in foal.”

When looking for a home for Near the Limit, Bailes immediately thought of Horseshoe Hill. He reached out to Brothers who not only purchased the stallion, but also the test foal, a filly named Cedar Lyn, who won once in 19 tries. 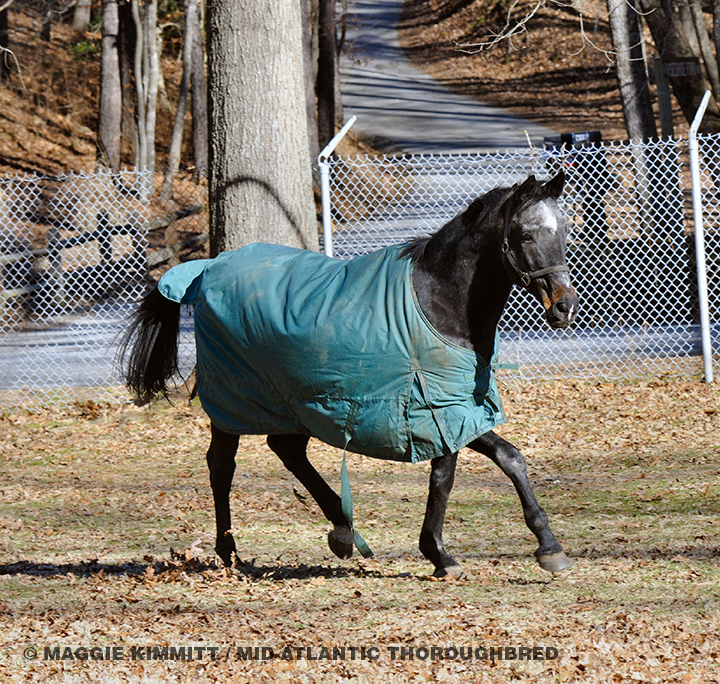 “We had four or five mares of our own and we bred them to him,” Stephanie said, “and there were other mare owners in the area who would breed to him. He was very professional with his mares and always threw very solid, sound horses that tried hard. He had a couple of allowance winners, maybe a small non-graded stakes horse. Nothing really jumped out, but he always, always threw nice-looking horses, and anyone who had a foal by him would tell me the same thing.”

Virginia’s purse money was robust during those years, and the breeder bonuses and stallion awards went a long way in maintaining Horseshoe Hill.

“He just really kept us going–he bought my hay, helped me build the big barn and shedrow,” Stephanie went on. “Limit brought the farm into the next generation and enabled me to do some things that I might not have been able to do otherwise.”

With his barn just beyond her backyard, Near the Limit is the first horse Nixon sees each morning and the last each night. Her day starts around 4:30 a.m. with the horse she lovingly calls “my buddy” being fed first. There is a small paddock attached to his barn but, weather permitting, he is walked down her driveway to a much larger field when farm staff arrive later in the morning. Sounds much more straightforward than it is, as the 27-year-old can often turn the simple act of being haltered into a real production. And it doesn’t stop there. He’s a gentleman going down the steep hill to his turnout, but “whoever leads him back up the hill better get tied on.”

There’s not a malicious bone in his body; he just likes to liven up his routine. Cheeky is the word that springs to mind. Nixon and Bailes were quick to mention that the old boy is a total chowhound who has been known to eat donuts, peppermints, tomatoes–pretty much whatever’s offered to him. 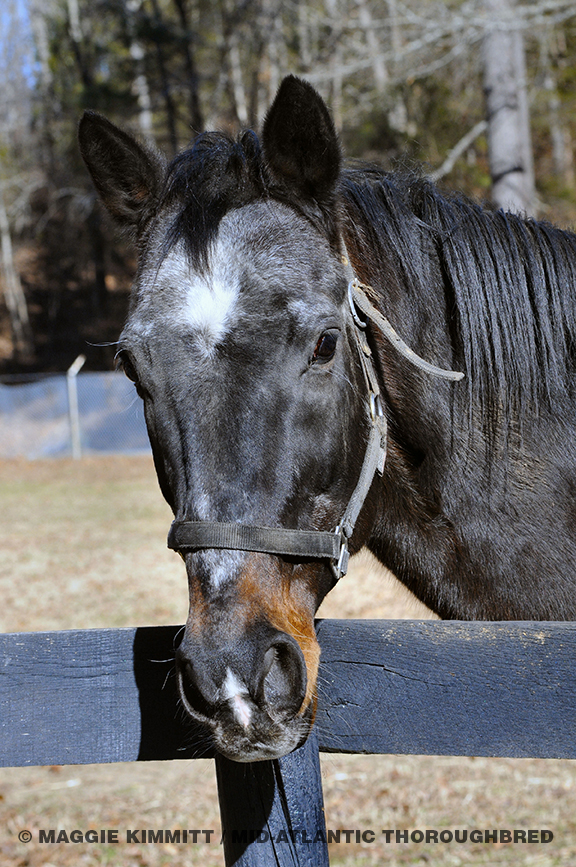 But more than anything, he enjoys a nice cold Coke. With Near the Limit in the corner of his paddock, Nixon walked to a feed tub on the ground in the center, popped open the can and poured it in. Her horse strolled over and took his time enjoying his beverage before heading over to see what else she was up to. He’ll follow her placidly one minute and then click his teeth near her ear the next, usually eliciting a squeak and a reprimanding finger pointed back in his face. It’s his game and he loves it.

“I have a cup of coffee with him in the morning, and I’ll have a glass of wine with him at night and we talk about our day,” Stephanie grinned. “He’s been here nearly 20 years, and this is where he’ll stay. He’s brought me to what I do here.”

As she spoke, two horses–one bay, one nearly black - grazed in a field just a few hundred yards away. Leatherbury’s stable star Ben’s Cat was enjoying his winter break on the farm with stablemate Mabroom. But at Horseshoe Hill, not even a superstar like Ben’s Cat can trump Near the Limit.

More photos of Near the Limit:

# Ann Taylor 2015-03-13 02:07
Another wonderful pensioner story!! Many thanks & hopefully you'll keep on with the "senior" stories. So great & always enjoyed!!
Refresh comments list 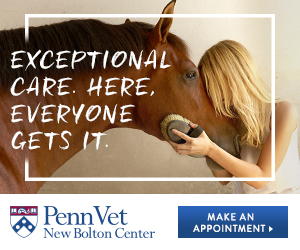